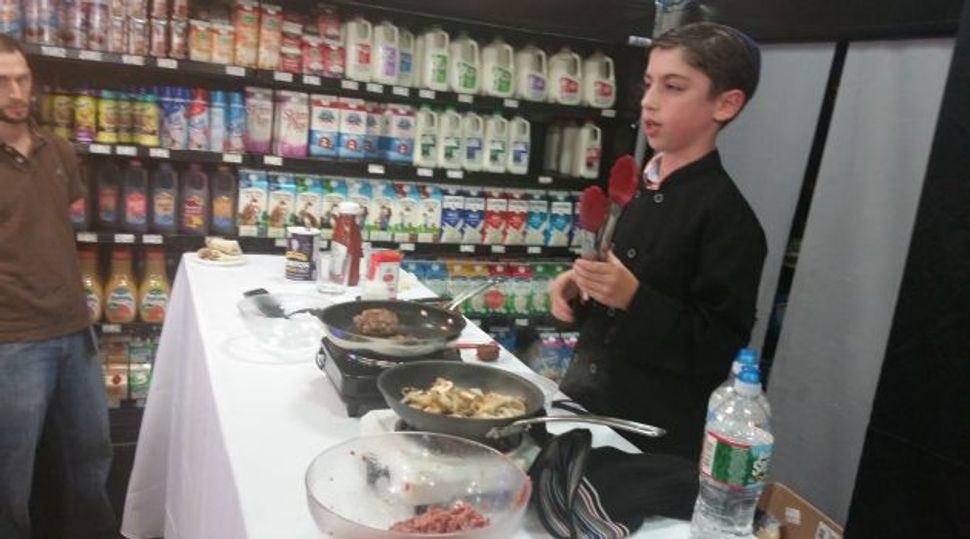 Eitan Bernath chopped mushrooms and sautéed onions with all the panache of a veteran chef as the crowd leaned forward in their seats, mouths watering.

“I love food,” Eitan smiled, his braces gleaming in the light. “I love eating food. I love talking about food. I love blogging and tweeting about food.” He turned over a slice of skirt steak that was sizzling in a pan and advised using peanut oil. “It brings out the flavor of the meat,” he said.

The 12-year-old chef was giving a cooking demonstration at Grand & Essex Market in Bergenfield, New Jersey, Monday night. The audience of over 125 people included the well-heeled housewives of Bergen County and their progeny, who oohed and ahed over every sizzle of Eitan’s fry pan. Even the Hasidim, usually hard at work behind the bakery and takeout counters of the upscale kosher supermarket, were transfixed.

In fact, Eitan had already brought his charismatic presentation to a cooking show: the Food Network’s “Chopped,” in an episode cheekily titled “Short-Order Cooks,” which aired last night.

“Chopped” is a cooking competition in which contestants turn mystery ingredients into restaurant-quality dishes within a tight timeframe. Contestants get “chopped” off the show after each of three courses is critiqued by a panel of celebrity chef judges.

Before filming the show last April, Eitan consulted a rabbi about whether he would be permitted to cook with non-kosher ingredients. The rabbi said he was allowed to cook non-kosher meat, but that he would have to keep it separate from dairy ingredients. 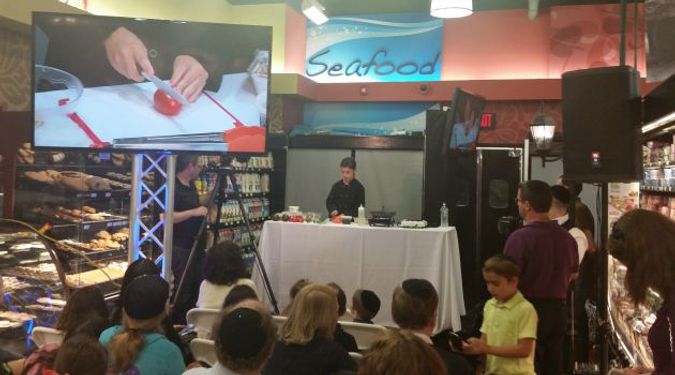 Eitan in the spotlight at Grand & Essex Market in Bergenfield, New Jersey. Image by Elie Rosenfeld

Eitan showed pride in his faith on the show. While the other contestants highlighted extracurricular activities in their filmed bios, Eitan, clad in a bright blue kippah, talked about how much he loves celebrating Purim, saying that he had dressed up as another Food Network star, Guy Fieri, last year.

Eitan performed admirably under pressure, cooking up beef sliders with a cotton candy sauce. He had the innovative idea of deep-frying tomatoes to transform them into something more interesting, but ultimately forgot to put them on the plate. When the cotton candy almost burned on the stove, Eitan ingeniously transformed it into an orange juice sauce.

But in the end, the judge’s had to make a tough decision, and with dramatic music playing in the background, host Ted Allen declared, “Eitan, you’ve been chopped.”

Blinking back the tears but utterly poised, Eitan thanked the judges for “an amazing experience.”

This week, Allen had high praise for Eitan, telling The Forward, “Eitan kept an online countdown to the episode for days and days — I hope it lived up to his expectations. He was great — good cooks just seem to get younger and younger.”

“I’ve always thought that being young and open minded is a huge asset on Chopped,” Allen continued. “For one thing, you’re less terrified of screwing up and getting bad press for your restaurant, because you don’t have one.

“In a way, though, coming from a Kosher household, you might think Eitan was lacking another important advantage of youth on “Chopped,” which is not being committed to a specialized cuisine, to the rules of technique of any particular style,” Allen said. “But he sure didn’t show that. Maybe the mindfulness and ingenuity imposed by restriction boosts creativity —I suspect it does. We try to respect contestants’ needs, but Eitan knew coming in that he might see some unfamiliar things; it wouldn’t be “Chopped” if you didn’t.”

Eitan grew up watching his mother, Sabrina Bernath, in the kitchen. When he requested more exotic fare than her typical menus, she urged him to cook up his own dinners. He took her up on the challenge, utilizing resources such as YouTube and the Food Network for tips. He ended up making such dishes as Red Lentil Curry with Homemade Paneer Cheese and Honey French Macaroons with an Apple Butter Filling. It evolved into a passion.

“In the beginning I fought it, but I realized this kid is never going to pick up a basketball,” Sabrina Bernath said.

The Bernaths never sought out reality-TV fame. A friend who knew about Eitan’s cooking skills sent an email about an open casting call at the Food Network. Eitan and his mother filled out an application as a lark. But he was soon called in for an interview. Another followed.

When he was auditioning, Bernath and her husband, Jason, told Eitan that wearing a kippah was his choice. Eitan, a student at Yavneh Academy, opted for the kippah. “Either they’ll want me or they won’t,” he told her.

“People love that he wears a kippah while he’s doing this,” Bernath said proudly. Among his fans is Teaneck resident Elie Rosenfeld, who said that some religious Jews liken the kippah-clad chef going on “Chopped” to “a frum kid going to the NBA.”

More cooking demos are ahead for Eitan and he already has a food blog. Who knows? There may even be a cookbook in the works.

Such pressure can’t be easy for a 7th grade yeshiva kid who’s in the throes of studying for his bar mitzvah. His mother says they will keep the event low key. She gestured towards the podium where Eitan stood surrounded by eager fans snapping his photo on their iPhones. She laughed. “He’s already been in the spotlight enough.”