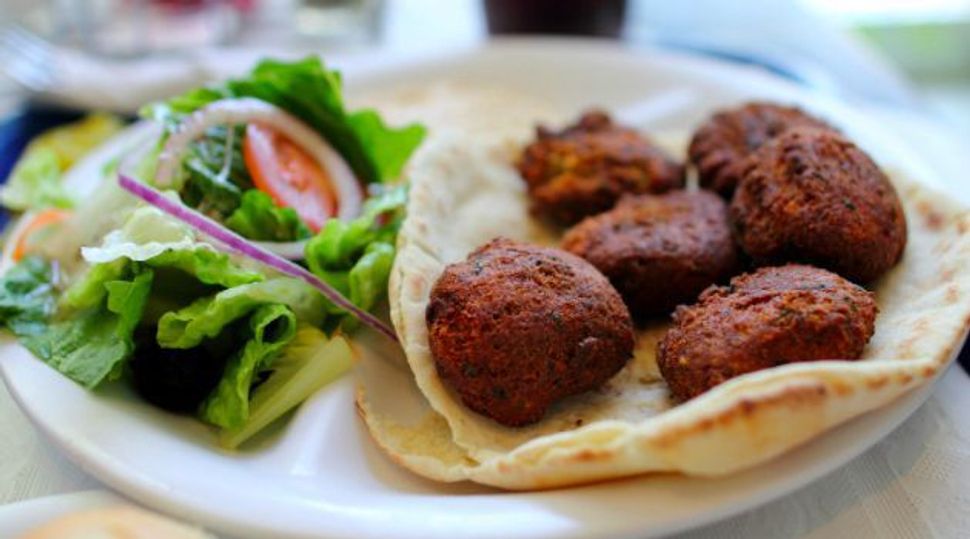 That was back in February, before Nana Shrier, the owner of the hip Tel Aviv bar and restaurant Nanuchka, saw a television news report about factory farming. Then everything changed.

Abhorred by how animals are treated in industrial meat and dairy production, Shrier stripped all the animal products from the menu — from cheese to eggs to chicken and steak — and made the restaurant entirely vegan.

It wasn’t an easy shift. Retaining the restaurant’s Georgian character has forced Shrier to get creative, finding meat substitutes and trying new dishes. She has also noticed that customers order less hard alcohol when they don’t eat meat. But none of that matters to her.

”We understood that there’s no price worth paying to create animal products, to see, to sell, to produce or to buy them,” she said. “The atmosphere is pleasant, but I would have paid any price. I would have lost half my business for this.”

According to the activist group Vegan-Friendly, Shrier is one of approximately 300,000 vegans in Israel. At nearly 4 percent of the country, activists say Israel has the highest per capita vegan population of anywhere in the world. And the trend appears to be accelerating.

Some 7,000 Israelis have accepted the “Challenge 22” to go vegan for 22 days since the initiative was launched in May by the animal rights group Anonymous (no connection to the hacker collective). About 250 Israeli restaurants are now certified “vegan friendly” by the group of the same name, meaning that at least one-quarter of their dishes contain no animal products.

Israel is also frequently included on lists of the world’s most vegan-friendly nations, thanks in part to the fact that national staples like falafel and hummus contain no animal products. And on Monday, Tel Aviv’s second annual Vegan-Fest drew more than 10,000 attendees to a festival of food, crafts and music that organizers claim is the world’s largest.

“The makeup of the community is the biggest change,” said Omri Paz, founder of Vegan-Friendly, which organized the festival. “In the past, maybe they were more spiritual, or people society viewed as a little different, a little strange. A lot of the new vegans are mainstream — vegan lawyers, vegan teachers. Everyone can be vegan.”

The alternative and the mainstream mingled freely at the festival, where people wearing baggy tie-dyed pants and shirts reading “Proud To Be Vegan” mixed with families enjoying picnics. The food stands lining the park offered everything from vegan cakes and ice cream to vegan shwarma, Israel’s trademark spiced lamb dish.

Even Domino’s Pizza had a booth showcasing its vegan pies — first sold in Israel. Ido Fridman, the vice president of marketing for Domino’s Israel, said the company has sold about 300,000 vegan pizzas since launching the pie last year.

Israel’s vegan boom comes at a time of heightened awareness of animal welfare on factory farms.

A Hebrew-subtitled lecture on veganism has garnered nearly a million views on YouTube in a country of just 8 million people. One-fifth of the country tuned in to see a vegan activist win the latest season of the Israeli version of the “Big Brother” reality television show. And a popular investigative news show has broadcast six segments exposing the mistreatment of animals in Israel’s meat and dairy industries.

The heightened consciousness around animal welfare has bolstered vegan activists. Founded just two years ago, Vegan-Friendly has seen attendance at its festival jump 25 percent this year. Another animal rights group founded two years ago, Free 269, recently opened Israel’s first sanctuary for animals from factory farms and has spawned dozens of offshoots in other countries.

“There’s the virality of Facebook and YouTube, so the messages and the pictures and videos are exposed to tons of people,” Paz said. “It helps that people are used to eating falafel and Israeli salad.”

Israeli veganism took root in secular liberal circles, but religious Israelis are joining the movement, too. Many note that the biblical Adam and Eve were vegetarians in the Garden of Eden.

Yehuda Shein, the chairman of Behemla, a religious organization that advocates against animal cruelty, says he is undeterred by the time-honored custom of eating meat on Shabbat and holidays.

“There’s no commandment to eat meat,” Shein said. “People make their own adjustments. They stop eating meat, they do something else. But our goal is to bring the information to the public.”

Veganism is not entirely a new development in Israel. The African Hebrew Israelites have abstained from animal products for decades. But while activists have cheered the recent growth in vegan awareness, veteran vegans fear it may be a passing fad.

Arie Rave, who started the vegan Buddha Burgers restaurant in Tel Aviv eight years ago and is about to open his sixth franchise, said he hopes new adherents take it seriously.

“People don’t become vegan in one day,” said Rave, whose restaurants are filled with posters touting veganism’s moral, health and ecological benefits. “It’s not one day or one conversation. It’s not just a menu. It’s an ideology.”