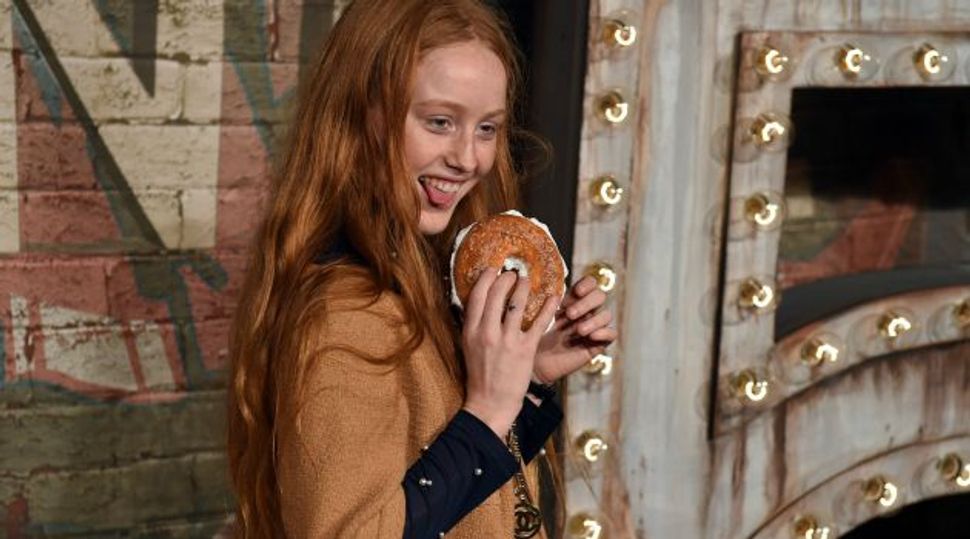 Actress India Menuez arrives at a Chanel event with a delicious (if ersatz) accessory. Photograph by Timothy A. Clary; Getty Images

This bagel goes with everything.

A mock “Chanel” bag designed to resemble a bagel with schmear became a global sensation this week after making its debut on the arm of actress India Menuez at a Chanel No. 5 dinner in New York Monday night.

The edible-looking accessory isn’t even the first Jewish-food mashup for Montreal-born artist Chloe Wise, who created the bagel bag. Wise made a “Prada” challah backpack this summer called “Ain’t No Challah Back (Pack) Girl” — basically a sculpted, braided challah loaf with two straps and a Prada label. And a 2013 work called “Star of Larry David” mounted sculpted bacon strips into a Jewish star.

Wise didn’t return the Forward’s requests for comment, but told Glamour that the Chanel bagel originally appeared on Menuez’s arm in a fake ad Wise created called “Bagel No. 5”. “Kosher for Passover. Kosher for Brunch. Kosher for Fashion,” reads the tagline. A fake kosher seal adorns the ad along with a tongue-in-cheek “Sponsored by Philadelphia Cream Cheese” photo and logo.

Wise said she jumped at the chance to unveil the bag at an actual Chanel event. “When India told me she was going to the Chanel dinner and asked if she could borrow the bag, I thought it would be a hilarious way to contextualize the art within the fashion audience and I said yes immediately.”

In the meantime, there’s been no reaction from Chanel. “I’m still waiting for their comment!” Wise said. “People seem to like this piece, but are also confused. Confusion is great. All of my work in this series is a combination of sculpture and comedy. These are art pieces, but when placed in a fashion context they transcend their original intention as wall pieces. As a dysfunctional art object, it’s interesting to see reviews where people are raving that ‘the bagel is going to be the hottest new trend this spring’ — I’m just LOL-ling.”

Sure enough, fashion site Racked breathlessly reported on the bag Monday, begging readers for clues about where to find it. At the Chanel event, Racked write, “THERE WAS A CHANEL BAGEL BAG. The bagel and cream cheese purse-wearer was India Meneuz. She must be really important, or Karl Lagerfeld’s roommate, because the bag has not been spotted in Chanel’s recent collections. No, not even the supermarket one. Please leave tips on how to pre-order in the comments.”

Menuez took it in stride. “My bagel sculpture: Bagel no.5. Urethane and oil paint with found hardware. Not by @chanel but stoked I fooled yall!” she Tweeted.