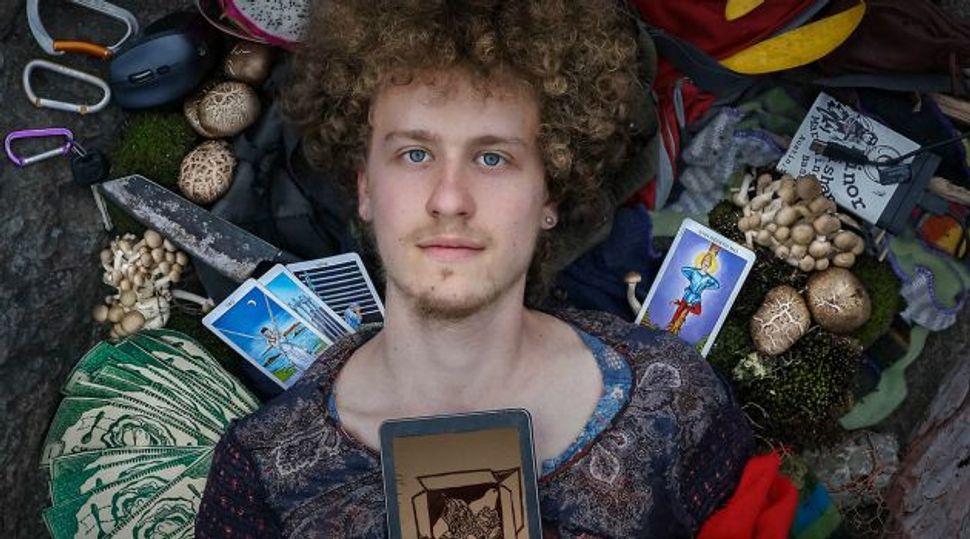 Maximus Thaler, author of “A Curious Harvest: The Practical Art of Cooking Everything”
Photograph by Hallie Gluk

Maximus Thaler sees himself as a modern-day version of the Biblical character Ruth.

The author of the newly published “A Curious Harvest: The Practical Art of Cooking Everything,” with illustrations by Dayna Safferstein, Thaler recently told me about a conversation he had with a rabbi at Tufts University, when he was a student there, about his passion for dumpster diving.

“Obviously, dumpster diving isn’t kosher, the rabbi told me, but I see this is as gleaning, and reconnecting with my agricultural roots,” he said. “I’m imagining myself as Ruth, who had no refrigeration. Food is so integral to my identity that I’m known as a gleaner. Ruth’s principles were very important to her, she really valued food for what it is, and [valued] not wasting anything.” 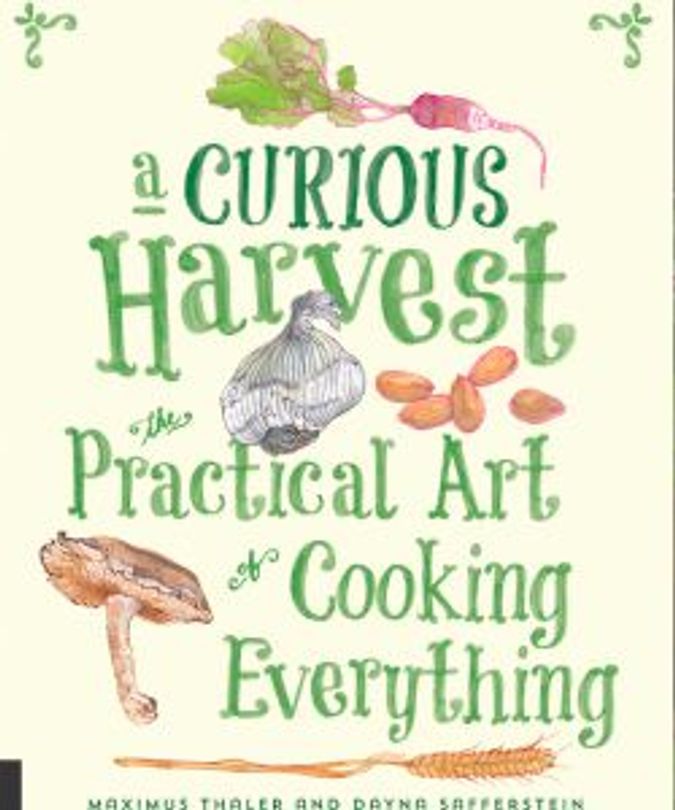 Thaler, 24, grew up in Garrison, New York. While he was raised Conservative and had a bar mitzvah, he described his mother as a seeker, who took him to nearby Buddhist communities and ashrams.

His grandparents were Holocaust survivors, a fact that led me — also the grandchild of survivors — to ask what they thought of their grandson being the Jewish face of dumpster diving. His grandfather, Thaler said, died some years ago — and his grandmother is no longer alert enough to know what he does. I couldn’t help thinking this might be for the best.

Thaler majored in engineering at Tufts, graduating in 2013. He hopes to eventually study evolutionary biology, which he says is “directly relevant to all of this, as I see it as much more cosmic than just reducing food waste.”

At Tufts, Thaler lived in a communal house called the Crafts House. One of the hallmarks of such houses, of course, is that residents cook and eat meals together on a fairly tight budget.

But while dumpster diving began mostly as a lark, it turned more serious in the four years he lived at the house.

“The Crafts House appealed to me for a lot of reasons,” he said. “It was its own little world, where the morality, values and aesthetics were different, as was the relationship with private property. It was less of a thing than in the world outside.”

“At first [dumpstering] was more about finding all of this cool stuff. But over the course of a four-year period, food became a lot more important to me. I had gone on enough dives that it dawned on me that I could feed the entire house with dumpstered food.”

Thaler spent summers at the Bread and Puppet Theater in Vermont, an independent collective of artists, where he often found himself cooking for over 100 people.

“They didn’t have a lot of money, and so they got a lot of produce donated that was on the verge of going bad,” Thaler said. “It was very similar to dumpstering, in that you don’t have a lot of storage space, and you’re playing a game with bacteria. It’s about understanding the decay cycle of your food and the different ways you can store it without refrigeration. You’re working against the clock, in that not only do you have three hours to feed 100 people, but you have 24 hours before [the food] goes bad.”

Thaler said he hoped to open a restaurant called The Gleaner’s Kitchen, which would serve creations made from dumpstered food. He hit a snag in the plan when a video of him dumpstering for a Kickstarter campaign was picked up by the local media and his landlord evicted him.

“The vision I had was clouded by my articulation of it, which was very ironic,” he said.

The cookbook is unlike anything on the market, in that rather than sending you to the store in search of ingredients for a recipe, it teaches you what to do with what you already have.

“It’s about having a relationship with the raw parts of your food, rather than preconceived notions of what food should be,” Thaler said. “There are no recipes. Each page is devoted to a certain ingredient and it has information on how to store it, how to know it’s going bad, the various ways to cook it and what it goes well with, so you can cultivate a relationship with each one and can modularize it to mix and match with different ingredients based on what you have on hand.”

For instance, okra will last over a week in the refrigerator, and in addition to being steamed, stir-fried or boiled, it can be pickled in diluted apple cider vinegar and salt.

Thaler is now in Berkeley, California, taking a few classes at The University of California, but come winter he’ll be in London working on a puppet show about the origin of life.

“There’s a good chance we’ll be dumpstering there,” he said.

Toward the end of our conversation, he summed up what kashrut means to him:

“If I’m going to interpret it more abstractly, kashrut is about building identity around food. Initially, of course, it was about keeping Jews with other Jews, but every religious tradition has its sacred food laws.”

While Thaler doesn’t keep kosher, he finds the laws of kashrut interesting in an academic sense.

“The kosher laws tend to get perverted,” he said. “People tend to forget what their original intention was.” As an example, he cites kosher chicken that was blessed by a rabbi, but still raised on a factory farm, making it, he says, just as bad as almost any other chicken.

“The idea of kashrut recognizes that the act of eating is sacred, and having a full-fledged relationship with our food and coming together on Friday nights to eat it, all of that is really important. Kashrut gives us that.”

What the two practices may have in common — dumpstering and keeping kosher — is a strong consciousness about exactly what we’re eating, and how it ended up on our plate.

A version of this article first appeared on Berkeleyside. Alix Wall is a freelance writer and personal chef in the East Bay and beyond. You can find her website at The Organic Epicure.