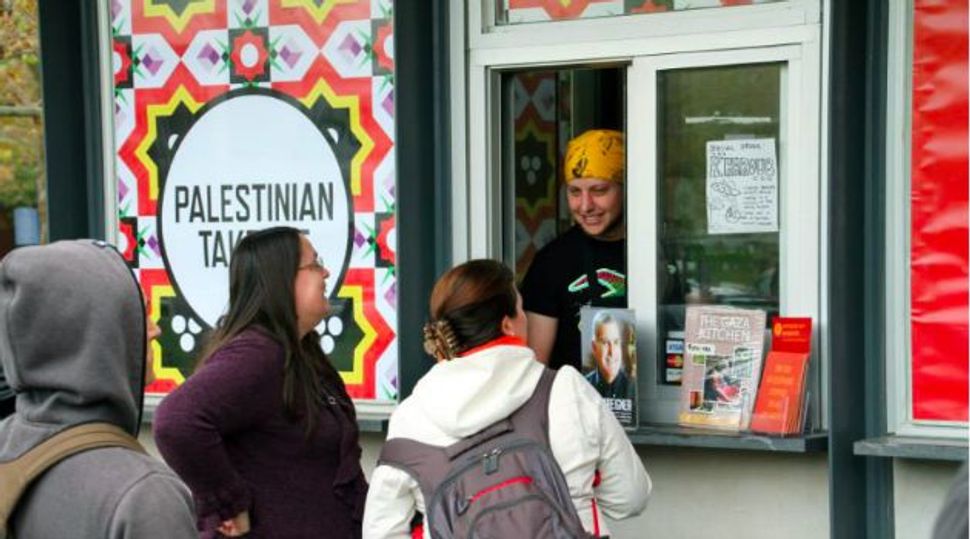 After receiving a letter containing death threats, Pittsburgh’s Conflict Kitchen, which has been serving Palestinian food since early October, announced on its Facebook page Friday that it was shutting its doors until further notice.

“We will be closed until the credibility of the letter can be established by the Pittsburgh police,” the statement said. “We hope to reopen shortly.”

The co-directors of Conflict Kitchen, Dawn Weleski and Jon Rubin, declined an interview request from the Forward, saying, “We are not able to respond to press at this time upon the suggestion of the police.”

Conflict Kitchen describes itself on its website as “a restaurant that only serves cuisine from countries with which the United States is in conflict. Each Conflict Kitchen iteration is augmented by events, performances, publications, and discussions that seek to expand the engagement the public has with the culture, politics and issues at stake within the focus region. The restaurant rotates identities every few months in relation to current geopolitical events.”

Having focused in the past on Venezuala, Iran, Cuba, Afghanistan and North Korea, Conflict Kitchen gained particular attention this fall when it introduced a menu of Palestinian foods that included a mezza platter, fattoush salad and maftool, a couscous dish with stewed chicken and chickpeas. As it’s done with previous iterations, Conflict Kitchen served the food wrapped in paper covered with messages transcribed from interviews with the people from the area of focus.

Written on the wrapper for a chicken dish called musakhan is the message:

“Musakhan is the national dish of Palestine. It’s just a round piece of bread with chicken, onions, and a ton of sumac. That’s it! Simple but delicious. You eat it rolled up like a sandwich or flat like a pizza. When I eat musakhan I always think of my mom and aunts cooking it in huge trays, layer after layer. We’d sit and eat, drinking tea and Turkish coffee, playing card games. At times we’d even forget about the wall.”

Later, it goes on to say: “The new generation of kids don’t like the traditional food! Maybe when they get older. They like fried chicken — even Kentucky Fried Chicken.”

Other messages focus firmly on politics. In response to criticism that the messages are anti-Israel, Conflict Kitchen responded on its website: “Like we have done for four years with every other country of focus, our food wrappers contain the viewpoints of multiple people within our focus country on a wide variety of topics. Our Palestinian interviews are no different, they contain interviews on food, culture, the Palestinian Authority, settlements, dating, resistance olive trees, Nakba, movement and travel, and food customs.”