Moroccan Tagine with Apricots and Almonds 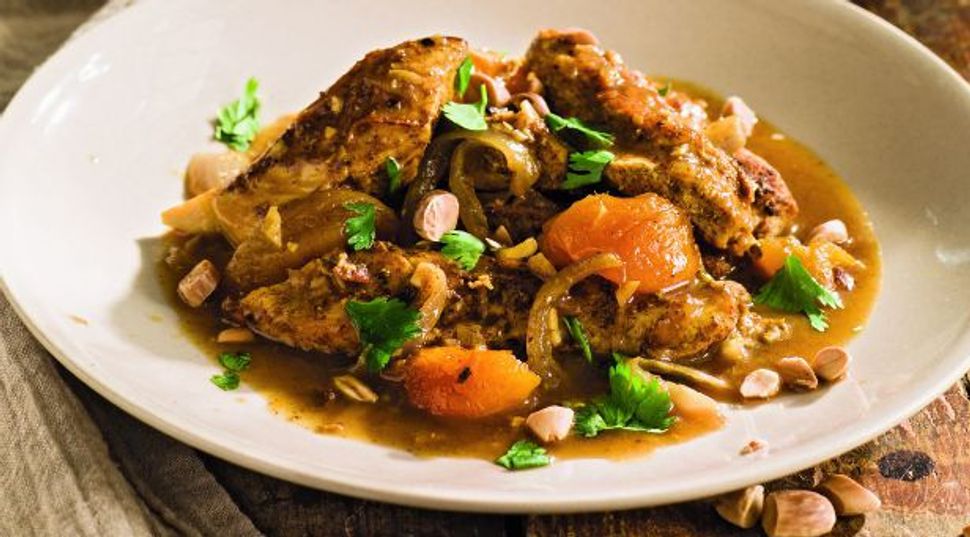 This wonderful stew is easy to make. It’s traditionally cooked in a tagine, which makes a really nice presentation. If you don’t have one, use a large Dutch oven — you’ll get the same results.

1) In a large bowl, combine the cinnamon, ginger, turmeric, pepper, 2 teaspoons of the salt, and 4 tablespoons oil. Add the chicken and toss to coat; let sit for at least 20 minutes and up to 1 hour to marinate.

2) Heat 3 tablespoons olive oil in the base of a tagine or in a large Dutch oven over medium-high heat until hot but not smoking. Add half of the chicken and cook, uncovered, for 6 to 8 minutes total, turning over halfway through cooking, until browned. Transfer to a plate and repeat with the remaining chicken, adding another 3 tablespoons oil for cooking. Transfer the second batch of chicken to the plate.

3) Add the onions and the remaining 1 teaspoon salt to the tagine or Dutch oven and cook, uncovered, stirring frequently, until the onions are soft and translucent, about 8 minutes. Add the garlic and cook, stirring occasionally, for 3 minutes. Tie the cilantro and parsley sprigs into a bundle with kitchen twine and add to the pot along with 1 cup water, the cooked chicken, and any juices that have accumulated on the plate. Reduce the heat and simmer, covered, for 30 minutes.

4) While the chicken is simmering, bring the honey, 1 cup water, the cinnamon sticks, and apricots to a boil in a small saucepan. Reduce the heat and simmer, uncovered, until the apricots are tender and plump and the liquid is reduced to a glaze, 10 to 15 minutes.

5) While the apricots are simmering, heat ¼ cup olive oil in a small skillet over medium heat and cook the almonds, stirring occasionally, until just golden, 1 to 2 minutes. Using a slotted spoon, transfer the almonds to paper towels to drain; let the oil cool before discarding.

6) Ten minutes before the chicken is done cooking, add the apricot mixture to the pot but remove and discard the cinnamon sticks. Finish cooking the chicken.

7) Serve the chicken (if cooked in a tagine, serve it at the table if you like), topped with the toasted almonds and more freshly chopped herbs.

Nut-Free: To make this dish nut-free, leave out the almonds when serving.

Vegetarian: Replace the chicken with 1 to 2 blocks of extra-firm tofu. To prepare the tofu, cut into ½-inch strips, then place on several layers of paper towels; cover with more paper towels and top with a cutting board to drain excess liquid. Let stand for several minutes, pressing down occasionally. Tofu contains soy, so this variation will not be soy-free.

Vegan: To make this dish vegan, replace the chicken with tofu (follow the preparation instructions for the vegetarian option above) and replace the honey with agave nectar. Tofu contains soy, so this variation will not be soy-free.

Wine Pairing: A crisp rosé would be the best choice for this meal and would complement the dried fruits and nuts, which are the main attraction in most mildly spicy Moroccan dishes.

Moroccan Tagine with Apricots and Almonds