Getting to Know the Jewish Whisky Company 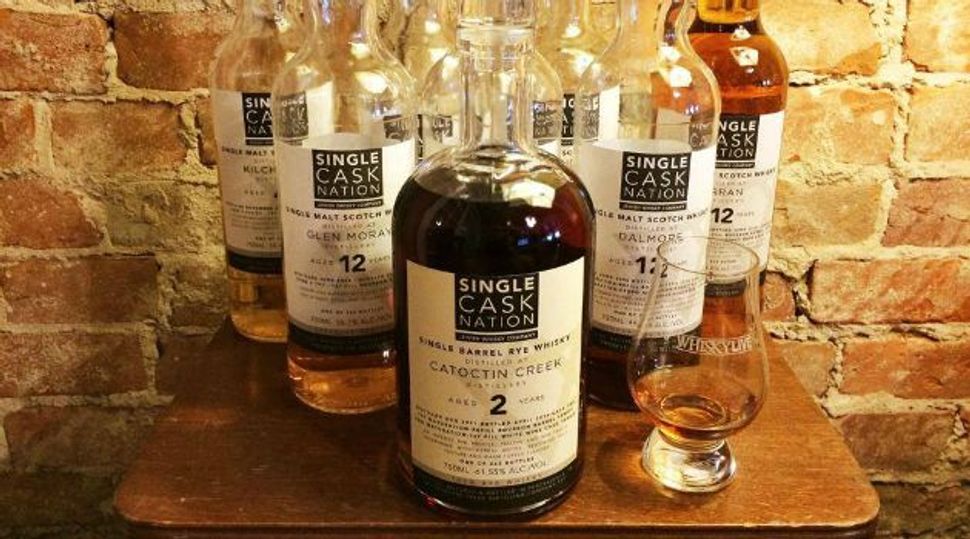 I’m not a big whisky drinker. I’m especially not a whisky drinker at 11:30 in the morning on a workday. But that changed when I had the pleasure of sitting down with Joshua Hatton and Jason Johnstone-Yellin, two of the three founders of the Jewish Whisky Company. (The third founder is Seth Klaskin.)

Prior to founding the JWC, Joshua and Jason had two of the most widely read, respected, followed and admired whisky blogs on the Internet. (Joshua still writes his, which is called jewmalt.com.) Readers would write in for advice and buying suggestions; distilleries would send the guys bottles and ask for their opinions. Over the years, Joshua and Jason found themselves consulting with each other, and eventually became friends.

Readers often asked Joshua, who observes kosher laws, his opinion of the “kosherness” of whisky, and where they could get good whisky that satisfied their dietary needs. That’s when Joshua called Jason and said, “Please tell me this is a crazy idea….”

Instead, Jason applauded the idea — starting an independent whisky bottling company — and thus the Jewish Whisky Company was born.

Jason Johnstone-Yellin, one of the three founders.

Jason is Scottish (although he calls himself “Jewish by wife”) and has led whisky tours through Scotland, helmed whisky clubs and had his blog. The two were a perfect match.

The Jewish Whisky Company is an LLC that purchases single casks of one-of-a-kind whiskies (bourbon, scotch and rye) from distilleries all over the world, bottles them and then sells to members of Single Cask Nation. SCN, along with the Whisky Jewbilee, its annual whisky event, is wholly owned by the JWC. Sounds confusing? Well actually, it’s pretty simple.

It was essential to all three founders that the Jewish Whisky Company would be a company by the people and for the people. “We’re the company where you can call us, email us… we’re accessible,” said Joshua.

They have nothing against the big bottlers, they said, but they wanted to have direct contact with their purchasers (aka members), which meant keeping the company small and making participation a membership that’s open to all. Individual members can email or post on private Facebook pages asking questions like, “Why should I buy this?” “What should I buy?” and “What’s coming up?”

Not only do Joshua and/or Jason reply personally, but other members chime in too. Creating and maintaining a warm, friendly, welcoming community is key to how the JWC operates.

It’s important to note that the JWC takes whisky very seriously. Their modus operandi is “Whisky First. Jewish Second.” That’s not to say that they’re not fun guys. I wanted to spend the day hanging out with them, listening to them talk about whisky and tell me stories. They are lighthearted, kind and extraordinarily humble (they refuse to call themselves experts, but they most certainly are). But when it comes to whisky, they are serious.

“When people are spending fifty, a hundred dollars and more on a bottle you recommend, that’s serious. We are being held to a very high standard. And we like that,” Jason said.

My knowledge of kosher laws is about as strong as my knowledge of neo-classical Greek architecture. That is to say, it’s non-existent. That’s when I just sat back and let Joshua explain:

“Process and ingredients are done in a kosher manner, per the Talmud,” he said. “Whisky matured in a cask or barrel that previously held bourbon or new charred oak or rum or anything that didn’t hold wine would make the whisky kosher by nature. The ingredients in Scotch whisky consist of barley, yeast and water. There is nothing against those ingredients in the Torah, except at Passover (when JWC participates in the sale of our whisky as chametz).

Joshua Hatton, a co-founder of the Jewish Whisky Company.

“It’s when whisky is matured in a wine, sherry, port, madeira or chardonnay cask that some kosher Jews might say, ‘Was the wine that was in the cask previously kosher?’

“Per the Talmud, if a speck of non-kosher food drops on your plate, but it constitutes less than 1/60 of 1/60 of what’s on your plate, your food is still kosher,” Joshua continued. “When you take a whisky that’s been matured in a wine or port cask, you can measure the wine in parts per million. So some say that’s fine, but others ask about intent. A whisky producer does not use a cask that previous held Spanish sherry wine (for example) because he wants the whisky to taste like sherry. Rather, they are looking for the effect of the Spanish oak on the spirit and it just so happens that Spanish oak casks tend to have been previously used for sherry maturation. There can be assumptions that if that whisky tastes like sherry the bottlers intent was to make it so, therefore it’s not kosher.”

Joshua noted that he disagreed with that theory, but said he understood why some might feel otherwise.

As we wound down, I got to taste whisky so divine, smooth and unique in flavor that it completely changed my opinion of what whisky can be. Single Cask Nation has various levels of membership, starting at $36, to gain access to its full line of whiskies. A membership would make a great holiday gift for just about anyone, but particularly for a) that person in your life who is super hard to shop for; b) the whisky lover; c) me. (Even if you don’t join SCN you can still get a t-shirt, and they’re pretty cool.)

Finally, I asked Joshua and Jason what had surprised them the most since starting the Jewish Whisky Company.

“The lack of demand for the Kosher OU symbol,” Jason replied. “We really thought that would be a thing, but in lieu of that, people have choices they can make.”

“The most surprising thing for me since starting Jewish Whisky Company is that three guys are able to run and grow a business while still having full-time jobs,” Joshua said. “Well, Jason has a part-time professorship at James Madison University in Virginia, but both Seth and I have full time jobs. Who knows, maybe JWC will be our full-time jobs in the coming years…”

Cheers to that, Joshua.

Getting to Know the Jewish Whisky Company