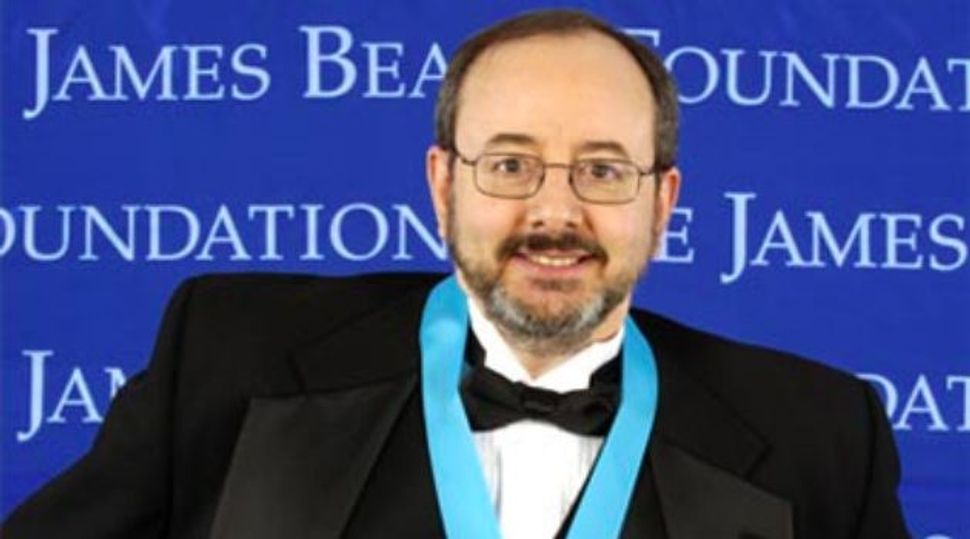 Triumphant in 2005 after accepting the James Beard award for ‘Olive Trees and Honey.’

The Jewish culinary world has lost one of its brightest lights. Gil Marks, avid food historian and author of the pivotal “Encyclopedia of Jewish Food,” for which he earned a place on the Forward 50 in 2010, died in Jerusalem today at 62, following a three-year battle with cancer.

Marks himself was a living, breathing encyclopedia of Jewish food, whom countless food journalists, myself included, turned to for scholarly, detailed information on the subject. Also an ordained rabbi, Marks wrote five books on Jewish food, among them “Olive Trees and Honey,” which won a James Beard award in 2005, “The World of Jewish Cooking,” and “The World of Jewish Desserts.” He was the founding editor of Gourmet Kosher magazine, which launched in 1986.

“I think he was a genius,” said food writer Adeena Sussman. “Any time you needed something, if you called him he was back to you in minutes with a very comprehensive, generous answer, with sources. Or you would write him a one-line question and go to sleep and you’d wake up in the morning to a page-long email. I suspect it just all flowed from within him.”

Eminent Jewish cookbook writer Joan Nathan agreed: “He was a walking encyclopedia of Jewish food. He was very generous, he shared with people. A mind like his, and a passion, comes along very rarely, so he’ll be really sorely missed, ” she said. “His ‘Encyclopedia of Jewish Food’ is just a remarkable work, one that I use every day.”

Sussman called him a pioneer. “He was ahead of the curve in terms of understanding the connection between Jewish food and its deeper cultural meaning,” she said. “He was motivated by a personal passion, and he saw 10 or 15 years ago the pride of place in the culture of an ethnic cuisine, and he put it in a historical context, as opposed to ‘this is just delicious to eat.’

“Jewish food has become a great source of pride for Jewish people, and I think that’s something he helped pioneer though his work.”

Marks lived in New York until 2012 when he made aliya and moved to Israel. His funeral will be held on Sunday in Jerusalem.