Are Gingerbread Houses for Jews Too? 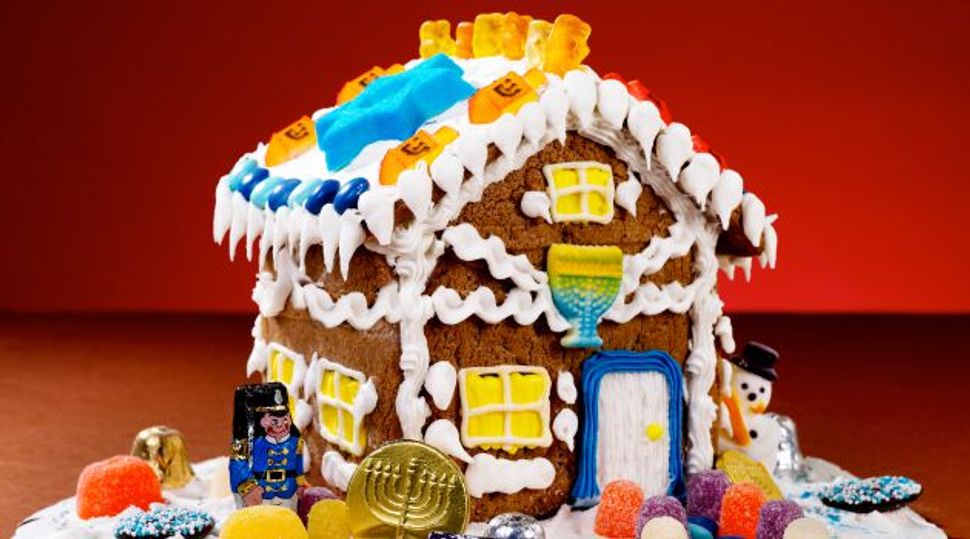 First, we had Hanukkah bushes. Then came Mensch on a Bench.

But is the world ready for Hanukkah gingerbread houses, a Semitic spin on the most goyish of holiday foods?

William Greenberg Desserts thinks so. The venerable bakery — which sells only kosher products — offers festive gingerbread abodes, complete with microscopic mezuzahs and miniscule menorahs, as it has for the past decade.

“We are a kosher bakery, but we serve everybody,” Carol Becker, the bakery’s owner, told the Forward. “We’re making gingerbread houses for Christmas, too. One of our decorators said he was going to make one for Hanukkah, and we put it out in the store. The response was amazing.”

Gingerbread houses do not exactly have Jewish roots. According to PBS’s The History Kitchen, they originated in Germany during the 16th century. The elaborate cookie-walled houses, decorated with foil in addition to gold leaf, became associated with Christmas tradition.

Their popularity rose “when the Brothers Grimm wrote the story of Hansel and Gretel, in which the main characters stumble upon a house made entirely of treats deep in the forest. It is unclear whether or not gingerbread houses were a result of the popular fairy tale, or vice versa,” according to PBS.

“It does surprise people when they see our version,” Becker said. “But they warm up to it pretty quickly — ‘Oh wow, it’s a Hanukkah house’.”

While each Hanukkah gingerbread house emerges from the bakery with individual touches (depending on the decorator), most include holiday motifs and blue, white and silver icing. Customers also make requests for children’s names or other custom touches. The gingerbread houses retail for $50 (small) to $80 (large). Becker recommends calling a day or two ahead for orders. “They move pretty quickly,” she said.

Hansel and Gretel did not respond to the Forward’s requests for comment on the gingerbread issue.

Are Gingerbread Houses for Jews Too?