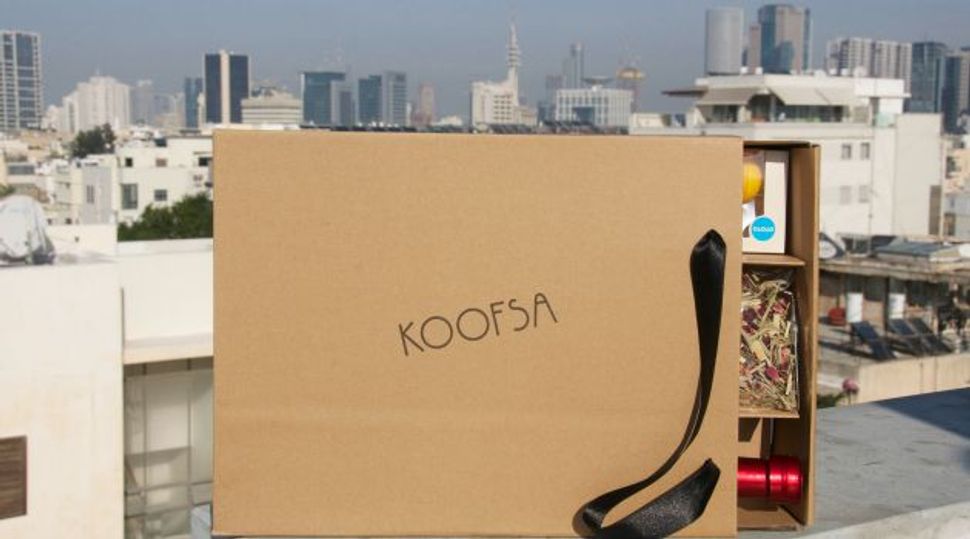 With the recent launch of Koofsa (which means “box” in Hebrew), Baum is offering an enticing opportunity for people in the U.S. to support Israel’s small food producers, family food businesses and other culinary creatives, while tasting a wide range of Israeli edibles in their own kitchens.

Baum has been brewing this idea for some time. While visitors on her Delicious Israel tours (which were rated 11th out of 125 best activities to do in Tel Aviv by Trip Advisor) noshed their way through the shuks in Jerusalem or Tel Aviv with her, swiping hummus at hole-in-the-wall joints by the port in Tel Aviv or baking bread with local artisans, she saw that they yearned to bring home flavors from their travels.

Logistics always got in the way, though. Products in breakable bottles, liquids that wouldn’t pass through customs and perishable items were all impossible to pack. Baum considered making up spice packets for visitors to take home as edible keepsakes.

The idea to gather a more substantial selection of artisanal food products blossomed during the Israel-Gaza conflict over the summer. “Tourism came to a complete halt. Hotels and cafes suffered, as did tour guides and all food-related businesses,” she said.

That recent economic crisis was the catalyst for this entrepreneur to develop Koofsa. Why not ship Israeli products directly to the homes of Americans who are so passionate about Israeli food, she reasoned ? And so Baum began to tap into her resources from the many culinary tours she had guided.

With each one-year seasonal subscription, recipients will receive a box full of surprises sure to encourage kitchen experimentation and a yearning to get back to Israel to taste the flavors in situ. Subscribers will receive four boxes a year to correspond with Chanukah, Passover, summer and Rosh Hashanah.

Baum says she anticipates that each box will include an olive oil or vinegar, a spice blend, something related to a beverage and some type of flavoring. She’s keeping the deets under wraps, as she wants subscribers to feel the thrill of anticipation and surprise when they open their carefully wrapped koofsa each season.

Indeed, I felt that excitement when I rescued the five-pound package from my icy landing in Connecticut and unpacked the delicious contents of my first shipment.

The koofsa was a tidy, perfectly packed, recyclable box containing eight items. Before I opened up the packet of hawaj, a Yeminite cardamom-based spice blend, I inhaled the warmth of cinnamon, ginger and cloves. I immediately began to conjure uses for it in stews, soups and baking.

When Baum and I chatted about the hawaj, she explained that the owner of the Arama Spice shop in Tel Aviv’s Levinsky Market was surprised to hear that Baum used hawaj for anything other than seasoning black coffee. But we quickly rattled off at least a dozen other ideas, including using it as a seasoning for all types of soup, for roasted squash, sweet potato latkes, oatmeal and carrot muffins. (I made the latter with great success. They’re pictured below.)

Carrot muffins made with the hawaj spice blend delivered in the writer’s first shipment. Photograph by Liz Rueven

In addition to hawaj, there was a generous bag of a relaxation-inducing tea blend — a colorful mixture of rose hips, lemon grass, lemon verbena and other herbs. Loose tea requires an infuser of course, and Baum was clever to source a whimsical “tea sub,” a submersible tea infuser designed and produced by one of Israel’s hottest design teams in Tel Aviv.

Another bag contained a traditional Yemenite seasoned nut mix called ja’ala, which is a crunchy, nutritious salad topper, made in small batches. You won’t find it anywhere other than the family-owned Le Delice shop in Machane Yehuda market in Jerusalem.

I was thrilled to discover a deeply tangy and antioxidant-rich pomegranate nectar nestled next to a full-size bottle of Saba Habib olive oil. The nectar is created by the Nurielis, a Persian family that came to Israel in 1951 and brought their love for pomegranates with them. Each bottle boasts the juice of approximately 40 pomegranates and requires a full day of simmering to yield the bright fuchsia nectar. While Baum suggests topping yogurt with this precious syrup, others may imagine whipping up salad dressings and marinades.

Each box contains at least five full-size artisanal food products, along with recipes and suggestions for how to enjoy them. The website will soon have a subsribers-only section with inspiring stories about the food producers, photos and a way to buy additional items available only to members.

Hanukkah subscription boxes have already been delivered, but there’s still time to purchase a year’s subscription as a gift for the holiday. Baum is poised to send notices to recipients, which they’ll receive during Hanukkah. (Note: Subscriptions purchased now will start with Passover delivery.)

Liz Rueven is editor and founder of Kosherlikeme.com