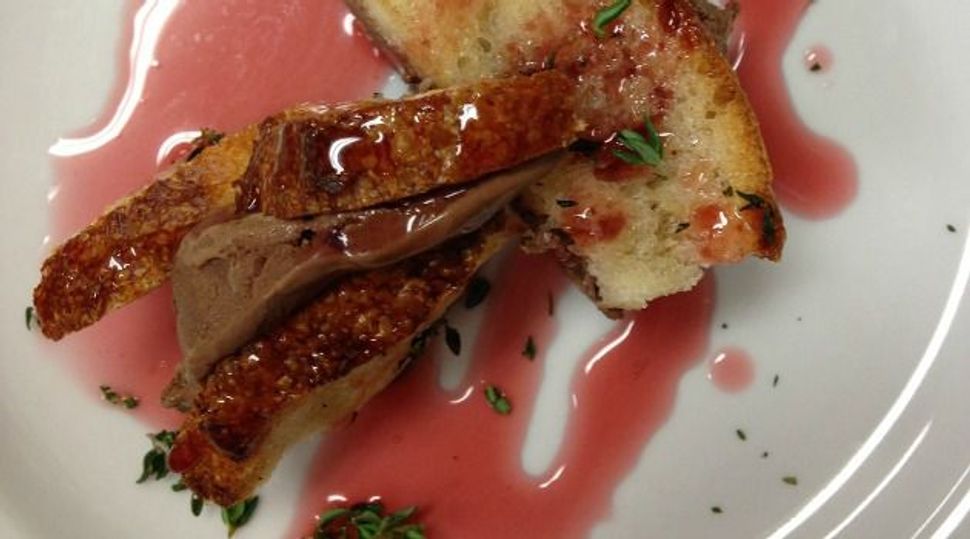 (JTA) — Hanukkah menorahs burn in the window of Miss Zumstein Bakery and Coffee Shop on Portland’s east side, and inside 22 guests sit facing one another at a long row of tables.

The group is celebrating the third night of Hanukkah with sweet and fatty treats. But, rather than sufganiyot, the jelly donuts that have become an iconic Hanukkah dessert, ice cream sundaes are front and center in this latest installment of the Morgan Street Theater, a culinary pop-up devoted to three-course tasting menus of ice cream sundaes accompanied by stories.

At the head of the table stands Jared Goodman, the chef, master of ceremonies and sole proprietor of Morgan Street Theater. His short-cropped brown hair, oblong glasses and boyish face, matched by a boyish enthusiasm, make him seem much younger than his 34 years. His apron’s psychedelic swirl of skulls, enormous snakes and what appear to be geishas playing Kleenex-box guitars, makes a slightly surreal contrast to his self-description as the stay-at-home dad to a 2 1/2-year-old daughter.

After introducing himself, he begins the evening with a retelling of the Hanukkah story which, he confesses, he has not rehearsed.

Seemingly unfazed by his stumbles, Goodman plows forward with his tale.

“And they held off the Syrians long enough to … actually, I think they won. Anybody want to correct me on that?”

Nobody does, and so the story of Hanukkah ends in triumph once again, and Goodman heads off to the kitchen to plate the first course while the guests introduce themselves to one another and chat.

It is an eclectic group, including a farmer who raises rare heritage breeds of duck, a professional harpist who also works as a traffic engineer, a mixologist, a high school choir director and the president of Portland’s Jewish federation. All have paid $25 for the event.

Each course is intended as a commentary upon the traditions of Hanukkah. So, the first course, “Festival of Light,” features a passionfruit sufganiya served with a champagne-raspberry sorbet and a brie fondue.

For the second course, Goodman recounts the Hanukkah deep-frying parties he and his wife used to throw, then veers into a disquisition on two of his personal passions — the virtues of making ice cream sandwiches with bread rather than cookies, and the merits of the shrub, a form of vinegary fruit syrup, which he offers for sale.

He then serves “The Geltwich,” featuring gelt-flavored ice cream (although the ice cream is not made from actual gelt, probably to the benefit of its flavor) served between two slices of sourdough bread, drenched in a raspberry shrub flavored with thyme.

For the last course, Goodman proposes that the guests play a game of dreidel. He distributes gelt and dreidels and then runs through the rules of the game.

The more experienced players fill in the gap (return a coin to the pot), and Goodman returns with “Americana Hanukkah,” a sort of deconstructed latke in the form of a crispy potato bird’s nest served with fresh sage ice cream and pool of salted pumpkin caramel sauce.

The meal (if three courses of ice cream can be considered a meal) is all the more extraordinary considering that Goodman, by his own account, ate virtually no fruits or vegetables before the age of 24, subsisting on a junk food diet of pizza, pasta, hamburgers and pancake mix. It is only over the last several years that he has even taught himself to cook.

“I don’t have a culinary background,” Goodman told JTA. “I’m just this guy who wants to be a teacher, is a stay-at-home dad, and I have these crazy ideas.”

The sundae tastings began as an experimental project in late 2013, but the Morgan Street Theater has garnered a following, as well as fans in high places. The Portland edition of the food blog Eater named it one of the city’s eight hottest pop-ups, and earlier in December the Portland Art Museum invited Goodman to craft sundaes inspired by its collection of American art.

The Hanukkah event is the second of a six-part series for the Jewish holidays, which Goodman launched at the urging of Nate DeGroot, a Hebrew College rabbinical student who spent the summer organizing grassroots Jewish events on Portland’s east side. The sundaes for the Jewish series are not certified kosher, but are kosher style — no meat with the dairy. Goodman has already served up Sukkot, and in the coming months he will stage additional events for Tu b’Shvat, Purim, Passover and Shavuot.

The evening ends with applause, and the reviews from the guests are generally positive. As the guests rise from the tables and begin to disperse, Goodman rates the evening a success: “It was boisterous. People were talking to people they didn’t know, and the plates came back empty.”