Moscow 57 Is Cooking at Last 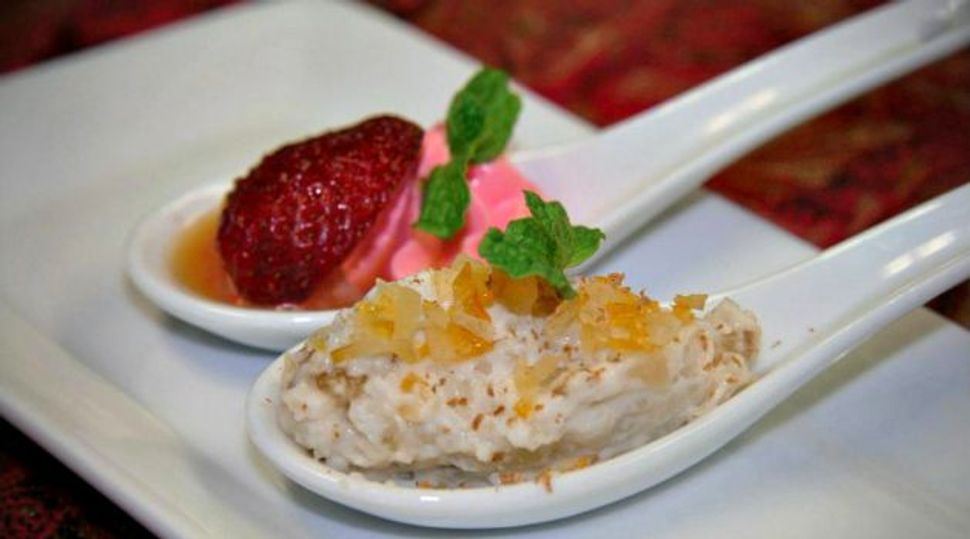 For nearly eight months, Ellen Kaye and her partners struggled to run Moscow 57 — their jewel box of a restaurant on Manhattan’s Lower East Side — without gas service.

Instead of the original menu inspired by the legendary Russian Tea Room, which Kaye’s parents owned for decades, Moscow 57 served sandwiches, salads, smoked fish and the occasional kebab.

But the wait’s finally over. In December, after seemingly endless tsuris with contractors, Moscow 57 turned on the gas. And a full menu of specialties that span Russian, Mediterranean, Georgian, Uzbeki and Jewish cuisine will finally roll out.

“The gas situation slowed everything down for us,” Kaye told the Forward. “It took everything we had to survive. We were out in the desert for what felt like 40 years. But we’re back.”

With a fully functioning kitchen, partner and executive chef Seth Goldman is serving up specialties like the Russian dumplings called pelmeni, chicken kiev and beef stroganoff, along with mod salads like pomegranate-daikon, date-cabbage-orange and celery root.

And, of course, Moscow 57 is proffering borscht and chopped chicken liver — food that not only conjures the classic Russian Tea Room, but Kaye’s magical-sounding childhood.

“We literally ate at the restaurant every day,” she said. “Russian cooking is like my grandmother’s cooking, except it’s the Tea Room’s cooking. And when we weren’t there, food was sent over in a box. It wasn’t until I was a teenager that someone cooked for real.”

Kaye’s parents, Faith Stewart-Gordon and Sidney Kaye, ran the celebrity-packed Tea Room from 1947 to 1996. A young Madonna worked coat-check; Barbara Walters, Woody Allen, Michael Douglas and Henry Kissinger were some of the regulars — eager, perhaps, to taste the food of their forebears.

“Russian and Jewish foods overlap, and they’re integral for each other,” she said. “They’re so woven together in my mind, my memories, my heart.”

Borscht became a particular area of expertise for Kaye. “As a kid, I was sent to taste the borscht to see how it was,” she said. “Borscht oxidizes in those large stainless steel vats. Sometimes I’d see it was slightly brown and not as fabulous as it should be, and I’d be tormented.”

On her father’s side, Kaye’s family also includes Jewish royalty. “My father’s sister, Alice, married Jan Peerce,” she said. Peerce, of course, was the stage superstar who lent his striking voice to Jewish melodies as well as classic operas. “I remember that he did Passover at the Deauville hotel in Miami Beach in the early ‘60s,” Kaye said. “He performed the ceremony for something like a thousand people. I got to do the four questions. Then I’d sneak out to watch Tom Jones perform in the next auditorium.”

Those memories fuel another passion of Kaye’s. An acclaimed cabaret performer herself, she’s turned Moscow 57 into a percolating performance space; with another partner, guitarist Ethan Fein, she also runs a talent booking agency under the Moscow 57 umbrella. (A fourth investor, Jeffrey Troodler, is “a plumber and a mohel who keeps kosher,” Kaye said.)

Next for Kaye and her partners: A series of pop-ups serving Moscow 57’s brand of Russian-accented cooking. “We were doing them all over the country in the years leading up to the restaurant,” she said. “We’ve been to New Orleans four times with pop-ups. We’re also talking to people in Toronto and Barcelona.” The ultimate goal: more branches of Moscow 57.

The team’s also exploring wholesale merchandising. “We’re a tiny boutique company, so we’re start starting that process. But we’re thinking about wholesaling our borscht, or our wonderful yogurts. Maybe even pelmeni. And we’re thinking about how to market lighting fixtures and carpets. The Silk Road story is a part of our brand.”

In the meantime, Moscow 57’s already gearing up for Passover, when the partners will serve a traditional — but not kosher — Ashkenazi seder dinner. “We couldn’t do kugel last year because of the gas situation, but we’re really excited to serve it this year,” Kaye said. “Passover’s one holiday I did with the family on my father’s side that meant everything to me.

“We created a Passover menu last year because we thought the friggin’ gas was coming on,” she said. “We even pulled people together for that dinner. Every day we acted like it was going to come on. This year, I’m looking forward to a normal Passover.”

Moscow 57 Is Cooking at Last