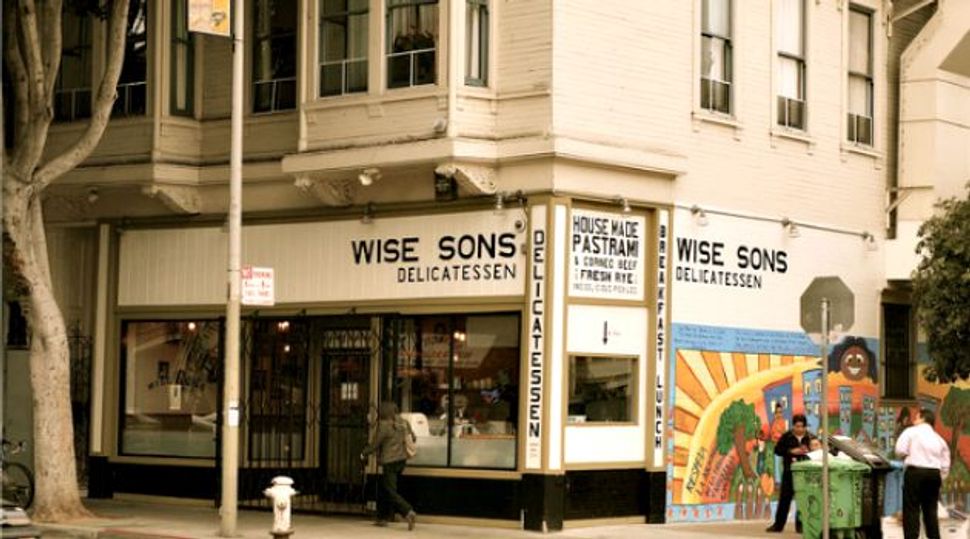 While the deli remains intact, Wise Sons lost its commercial kitchen in the fire. Photograph: Flickr

Beloved San Francisco deli Wise Sons is scrambling to rebuild its catering and wholesale businesses after a devastating fire in early February destroyed the building that housed its commercial kitchen.

The fire — which killed one person and injured six, according to news reports — also forced the delay of offshoot Wise Sons Bagels, which partners Leo Beckerman and Evan Bloom had planned to launch this week. After months of testing, Wise Sons’ commissary kitchen was finally ready to bake bagels for wholesale accounts and branded retail outlets it had planned to open across San Francisco, SFGate.com reported.

Still, Bloom told the Forward that Wise Sons will emerge from the disaster even stronger. “In six months, we’re hoping we’ll be saying, ‘Yes, we made it through the fire,” Bloom told the Forward. “We have to find a new place. And the market for real estate in San Francisco is abysmal. But we know more about our business now. And our staff has really come together. I’m a micromanager. Suddenly, you can’t worry about a lot of little things. The staff has really shown us they can do it.”

Last Thursday’s fire, just blocks from Wise Sons’ restaurant in San Francisco’s Mission District, “happened right when we were baking,” Bloom said. “We’re on the ground floor. There was water damage, smoke damage, collapsed ceilings. Most of our equipment was totaled.”

The kitchen was a hive of activity for Wise Sons, which has garnered raves from press — and customers — since it opened in 2011. A second restaurant opened inside San Francisco’s Contemporary Jewish Museum last year, and a catering business thrived.

While the restaurants have their own kitchens and production facilities, the commercial kitchen supplied all baked goods and meats for the company’s outside gigs. “We smoked and cooked our own meats and baked challah, bialies, babka and rugalach in that kitchen,” Bloom said. Wise Sons’ also sells at San Francisco’s renowned Ferry Plaza farmers’ market, and the facility produced those goods as well.

While the partners scout for new space, they’re improvising. “We’re very proud of our bread, but we’re purchasing Max’s bread in the meantime — they’re the only other bakers in San Francisco who make a Jewish rye,” Bloom said. “Fortunately, we have a lot of people working for us, and we’ve been able to roll with the punches. We had a couple of pastrami shortages, but we’re making it work in other ways.”

Along with a groundswell of support from customers and local foodies, Beckerman and Bloom got an inspiring message of support from a fellow deli maven who endured similar setbacks a couple of years ago.

“Noah Bernamoff at Mile End wrote us this really beautiful email saying, ‘This brings back very vivid, very scary emotions of the worst day of my life. I don’t know how I can help from New York, but if there’s anything, I’ll do it. The whole family’s here for you,’” Bloom said. “That meant a lot.”

Mile End’s commercial kitchen in Red Hook, Brooklyn was destroyed by Hurricane Sandy in 2012; the business has roared back since then, with offshoots like Black Seed Bagels and Mile End outposts across New York. [Ziggy Gruber], the Houston deli giant and star of the upcoming documentary Deli Man, also reached out to the Wise Sons partners; like him, they’re featured in Deli Man, a documentary on Jewish food set for February release.

For now, “we told our customers that the best thing they can do is come in and eat,” Bloom said. “Yes, I have nine employees without a place to go to work. But it could have been a lot worse. Somebody died in the fire. We thank our lucky stars — our whole team was in there working, and they got out.”