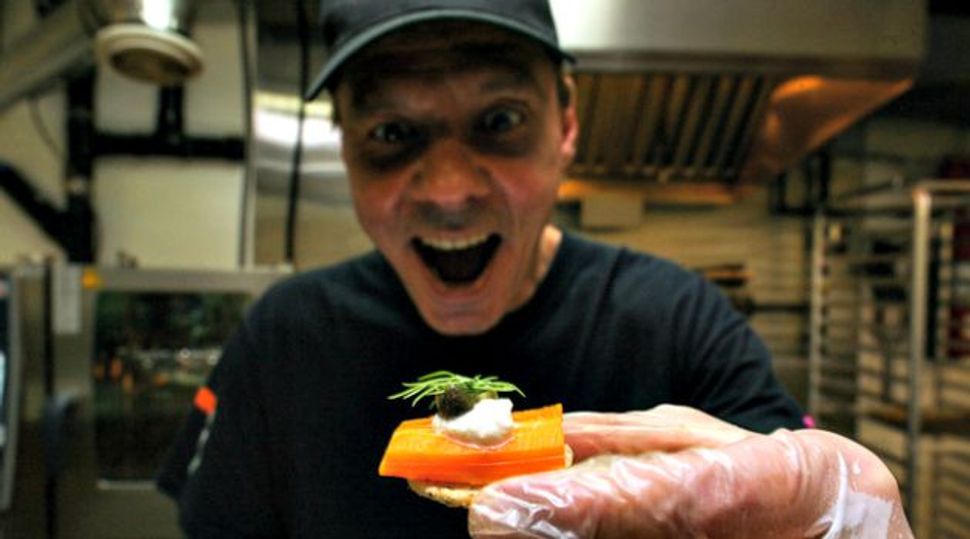 That luscious lox is made of carrots. Silky cream cheese comes from cashews. And the crispy bacon? Maple-marinated coconut.

Welcome to Yam Chops, the herbivore paradise that bills itself as Canada’s first “vegetarian butcher.”

“We’re about non-meat meat that tastes great, with great texture,” said Jess Abramson, whose family runs the shiny storefront next to a chicken shop in Toronto’s Little Italy. “We’re describing that act of putting that protein at the center of your plate, and getting it within easy reach of customers. If you’re a vegetarian, the question of your main meal always haunts you.”

With customers who run the gamut between vegetarians, “flexitarians” and curious carnivores, Yam Chops has earned a fanatical following among Toronto foodies. “We’re a throwback to what a butcher shop might have been 100 years ago, where they knew your name and what you liked,” Abramson said. “We encourage people to taste, guide them around the store, open cases for them. People crave that kind of service now.”

Yam Chops burgers, made with beets.

And for that lox? The Yam Chops crew starts by slicing large carrots on a mandolin, then sprinkling the slices with a dry “marinade” of cracked black pepper, smoked sea salt and brown sugar. After the carrots have marinated, they add a wet marinade of egg replacer, lemon zest, olive oil and water. The slices bake for about 20 minutes, which adds a slightly sweet note and creates the lox texture, Abramson said.

‘Lox’ made from carrots is topped with cashew cream, capers and dill.

“We always serve it topped with house-made cashew cream, capers and dill. The resulting carrot ‘lox’ hits all the flavor notes of smoked salmon except the strong fishy flavor. Topped up, it’s a very similar experience — or for a non-seafood lover, even improved,” she said. As complex as they sound, “a lot of these recipes are from my father’s experiments in the kitchen,” Abramson laughed.

Before opening Yam Chops in 2014, the Abramsons had never run a food business. Abramson’s parents, Michael and Toni, ran an ad agency that employed Jess and her sister Leya, who now runs Yam Chops’ social media operations. After they sold the business, Michael — like Jess, a longtime vegetarian — decided on a vegetarian eatery as his next act.

The place took off almost instantaneously — “without sending a single press release,” noted Abramson, who oversees Yam Chops’ burgeoning juice business. “It’s been crazy.” More than 100 requests for franchising have reached the Abramsons, but that’s not where the family business is heading.

Nor is kosher certification. Though there’s “no meat in our building” and its products are all plant-based, Yam Chops doesn’t have a kosher stamp — and probably won’t get it. “One thing that prevents us from going kosher is that we’ve been asked to close on Saturdays to get the certification. But that’s our biggest day,” Abramson said.