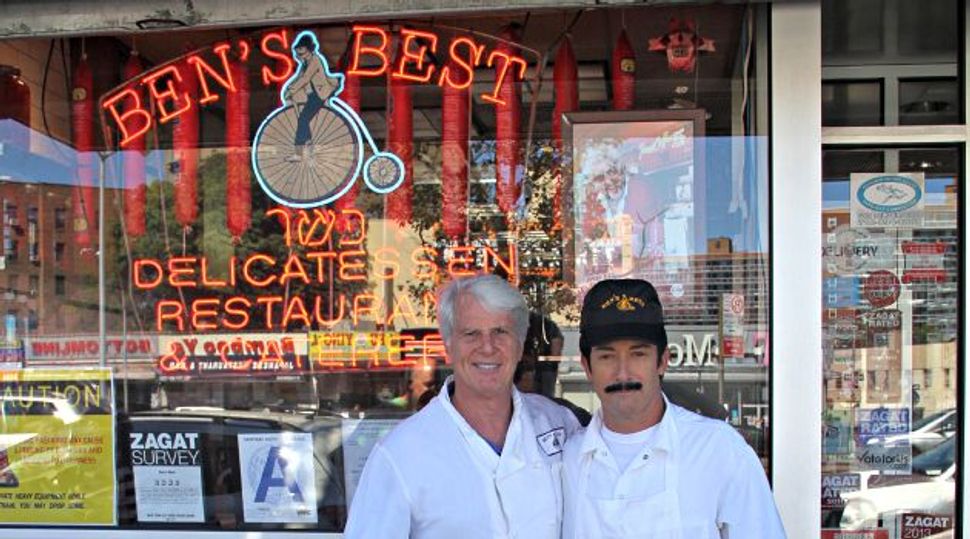 Of all the machers in the new film “Deli Man”, which opens this week, Jay Parker of Ben’s Best stands out. He’s in Rego Park, Queens, for one thing, not the sexy Lower East Side or Midtown Manhattan. He also comes across as a consummate deli man, as quick with a quip as he is with a witty quote about the joys — and occasional tsuris — of running a kosher deli.

And while Parker may not enjoy the high profile of some of his counterparts, Ben’s Best has developed its own mythos after 70 years in business. The New York Times hailed its pastrami as “incredible”; Guy Fieri honored Ben’s Best with a Diners, Drive-Ins, and Dives segment last year.

Ben Parker, Jay’s father, founded Ben’s Best in 1945. After Ben’s death in 1984, Jay — then 33-year-old bond trader — took over the business, and hasn’t looked back. At the start of another day serving up sky-high corned-beef sandwiches, overstuffed cabbage roll and steaming matzo-ball soup, Parker took time to catch up with the Forward. “Deli Man said something accurately: If you don’t love the business, you really can’t be here. It asks too much of you,” he says.

‘Deli Man’’s been attracting a lot of attention. Have you seen a bump in business because of it?

JP: We have people that went to the theater in Kew Gardens [Queens], where they’re running the trailer. They’ll say, “Oh, we saw you.” And someone sent me a link to a review in the Idaho Statesman. First line: “Don’t see this movie.” Second line: “On an empty stomach.” I texted Eric [Erik Greenberg Anjou, ‘Deli Man’’s director/producer] — “We’re boffo in Idaho!” Seriously, that says deli isn’t necessarily just a Jewish thing or a cultural thing. We’re a part of American culture, woven into the fabric. This is a long time coming, and it should be chronicled. This is how thousands of families were supported. When newcomers hit shores of this country, they didn’t have much else to do. This is what they did, providing a living so the next generation could live better. It’s the American dream.

Among the deli men in the movie, there’s a refrain of, “Oy, it’s so hard, we’re barely making it.” But most of the delis featured, including yours, seem to be doing very well. Which is the case?

JP: Put it this way: If we were all making a lot of money, there’d be a lot more kosher delis. I have two kids, and I don’t want them to go into the business. The nets [profits] are nothing. The cream of the crop is still in business. People who understand the business end of business are making it work. Not to point to other restaurants, but typical Italian/Chinese restaurant spends 28-30% on food costs. A kosher deli like ours spends 40% or more. Don’t cry for me — we do okay. We make it up in volume, and in other ways like catering and selling through online retailer Foody Direct. It’s not just about opening the doors and hoping people walk in to buy a sandwich. It’s a very sophisticated thing.

We’re also the only business I can think of that’s so attached ethically and morally to “kosher.” We supply food to people who, for religious reasons, eat a certain way. Raising prices becomes a moral decision. There are older people who get affected. Now, some of them walk around thinking it’s still the 1940s. They remember when it was buck and a half. Now it’s $12, and they’re like, “You thief!” That’s what we have to deal with. You keep those factors in mind when you raise prices.

Do you still have the customer base in Queens to support a kosher deli?

JP: The demographics have changed so much. The audience runs entire spectrum. One Sunday, 80% of the people in our dining room were Asian. I ran outside to see if the Chinese restaurant was on fire. Turns out we got a review in a Chinese newspaper. Chinese customers love meat and spicy foods. They actually came up and congratulated me. My father used to say, “I want to open a kosher deli in a goyishe neighborhood.” With Jews, it’s always, “Eh, that one’s food is better.” Everything’s better somewhere else. You’re in competition with your audience.

Is it fair to say Ben’s Best has a bit less of a brand than Katz’s or Carnegie Deli, or some of the other delis in ‘Deli Man’? Does your deli have the standing it deserves in that world?

JP: Probably not. Katz’s has been around 100-odd years. They own the property, in Manhattan. What we hear from the major networks or media who consider covering us is, “We don’t go to Queens.” It’s tough for us in the hinterlands. As far our brand is concerned: If you’re really good, they’ll find you. We’ve been here 70 years. That in itself is a statement.

You’ve still got a lot of traditional Ashkenazi food on the menu. How has the lineup changed over the years?

JP: Here’s a story. One regular customer always used to talk about how his mother used to make baked carp. Every week, it was “baked carp.” Finally, one week, I told him, “Great news! We made baked carp just for you.” His answer: “Eh, I don’t feel like baked carp tonight.”

In my father’s time, we had things like langen stew — calf’s lung — and heart. We had schav, which is made from calves’ feet. It’s stuff we can’t sell anymore. The generation from Europe expected that, and it’s what we delivered. Same with cholent. I love cholent; my grandmother made it. Maybe once a year, we get a call from someone who wants cholent. Things fall off the menu all the time. Chicken fricassee just fell off — I can’t remember the last time anyone under 60 asked for it. Tongue Polonaise is gone. We’re trying to replace it.

We’re bringing in wraps and salads. In the old days, salad in kosher deli was a wedge of lettuce, two pieces of tomato, an olive, and salad dressing in a bucket. Now it’s more sophisticated. We serve different greens, and salad dressings are made in-house.

Your pastrami sent a New York Times writer into ecstasy. How’s it different?

JP: We make it over 21 days. It’s smoked at lower temperatures for a longer period, so it’s leaner. It gets a sharper, smokier taste. When you bite into it, it’s like cotton candy; it’s a little explosion in your mouth. The flavor really comes through. It has a little more character than others.