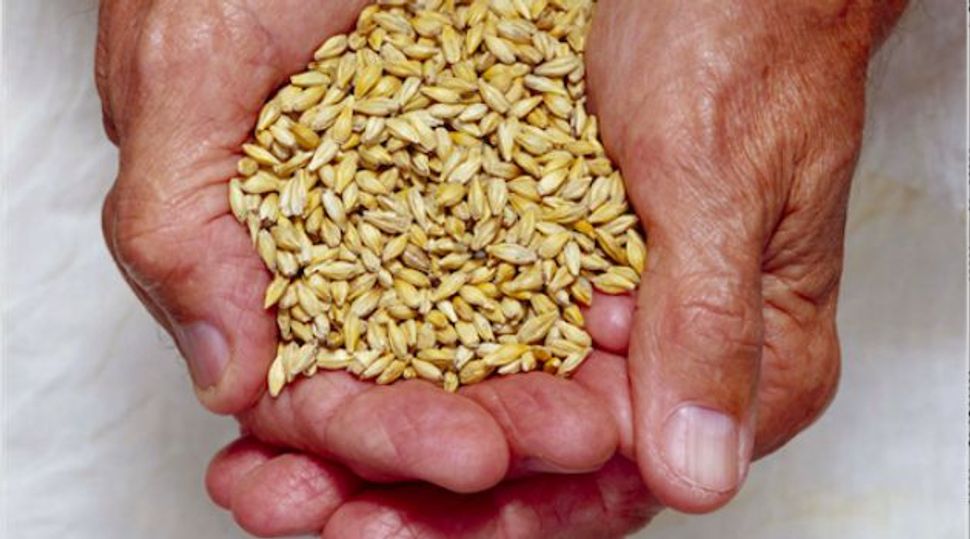 When we hear the word Passover, we think about matzo, matzo brei, and matzo balls, but before the destruction of the Second Temple Jews associated Passover both with matzo and with barley.

Barley was a critical foundation of our ancestors’ diets due to its resilience in the searing desert heat, and since it was the major grain of the time, it is not surprising that the Torah mentions it frequently. All of the references make it clear that barley was a staple of the ancient diet whose preservation was critical. The Book of Exodus tells of a pounding rain of hailstones “by which the barley was smitten,” one of the ten plagues brought on the Egyptians about which we read at the Seder. The Prophet Ezekiel paid penance to God by eating a diet relying on barley. When King David’s son, Absalom, ordered his servants to burn Joab’s fields, it was barley that was set afire. And, seven weeks after Passover, on the Festival of Shavuot, we read in the Book of Ruth that King David’s great-grandmother gleaned barley from kinsman Boaz’s fields.

In ancient times, the grain harvest lasted seven weeks, beginning with the harvesting of the barley during Passover and ending with the harvesting of the wheat at Shavuot. But harvesting in biblical times wasn’t done the way large corporate farms do it here in America. Governing the entire process was the Torah. The book of Leviticus (23:15) commanded, “When you enter the land that I am giving to you and you reap its harvest, you shall bring the first sheaf of your harvest to the priest. He shall elevate the sheaf before the Lord for acceptance on your behalf.” That “first sheaf” consisted of newly harvested barley, one of the seven Biblical species and one of the earliest grain crops known to humanity. The Sanhedrin (the supreme religious body during the days of the Temple) would send three agents to the barley field at night. These agents would cut sheaves of barley and place them into bins. An omer was actually a bound bundle of grain. During the night, they would winnow the edible seeds from the chaff, toast the seeds and then grind and strain them into a fine flour. They reserved a measure for the omer offering. The next morning, they mixed the ground barley flour with olive oil and frankincense, at which point the kohen put a handful of it on the fire in the middle of the altar. The rest of the grain was distributed to the other kohanim to eat.

(Frankincense, by the way, is used today in aromatherapy and by natural health practitioners, its oil touted as being beneficial for healthy cell regeneration and keeping existing cells and tissues healthy.)

Until the entire process was done, from cutting the barley to sacrificing it, it was forbidden to eat any new grain, so any harvested before Passover could not be eaten until the omer offering had been completed. (Barley is one of the five grains we are prohibited from enjoying during the holiday, along with wheat, rye, oats and spelt).

Forty-nine days of counting later, a new offering of both wheat and first fruits was presented at the Festival of Shavuot. The ritual cycle that began with the priest presenting the first sheaf ended with an offering of the first fruits. The two festivals are linked by their gratitude to God for the harvests, and although we have nothing to harvest yet here in New England, we are very thankful for the renewal of life in spring — especially after a winter such as the one that just ended.

Since the destruction of the Temple and continuing to today, Jews around the world have commemorated the ritual of bringing the barley offering to the Temple by counting the omer, beginning on the second night of Passover.

Some sources consider the omer countdown to Shavuot as a methodical, 49-day process of winnowing the chaff from our souls as we attempt to refine ourselves. It is also a reminder to us that our days are numbered, and that we must make every one count.

Now, back to barley. Evidence of this member of the grass family has been found in the wild from North Africa and Crete in the west, all the way to Tibet in the east, dating as far back as 8500 BCE. But farmers from a narrower stretch of land — including Israel — domesticated it, and archaeologists have discovered barley in a dig at the southern end of Lake Kinneret in the Galilee.

Barley has been such an essential component of the world’s nutrition that it came to signify a standard in many areas. A barleycorn is a single grain of the cereal. Beginning in medieval times, the barley came to refer to a unit of length. This measure evolved into the familiar system of inches and feet we use to this day, whereby an inch consisted of three barleycorns. In fact, shoe sizing is still based on the barleycorn standard. In other areas of measurement, the barleycorn grain evolved into the “gram” for weighing items in the metric system.

People have found many different uses for barley other than simply as a grain in stews, soups and breads. Barley malt, used as a sweetener, originated in China before it spread to Japan, where it is used as a sweetener. The ancient Egyptians made beer from barley, where it was so highly valued that it was used as both an offering to the gods and as wages to workers. Archaeologists have discovered evidence that the men building the pyramids at Giza were given beer as part of their rations.

In the beloved P.L. Travers’ book “Mary Poppins,” the Banks children were adamant that any nanny of theirs should never smell of barley water. However, barley sugar candy was another matter. In one story, the umbrella-toting Mary took her charges to a sweet shop to buy gingerbread, and the proprietor, Mrs. Corry, magically snapped off a few fingers that morphed into barley sugar candy, a caramel-like confection that pleased the children.

The ancients, wasting nothing, used barley not only for food. After winnowing the seeds from the plant, they dried the stalks into straw for weaving into mats, baskets and shoes. Tied into bunches, the barley stalks made excellent thatch for the roofs of their houses.

So, the next time you make mushroom barley soup, know that you will be continuing a relationship that has been going on for millennia.