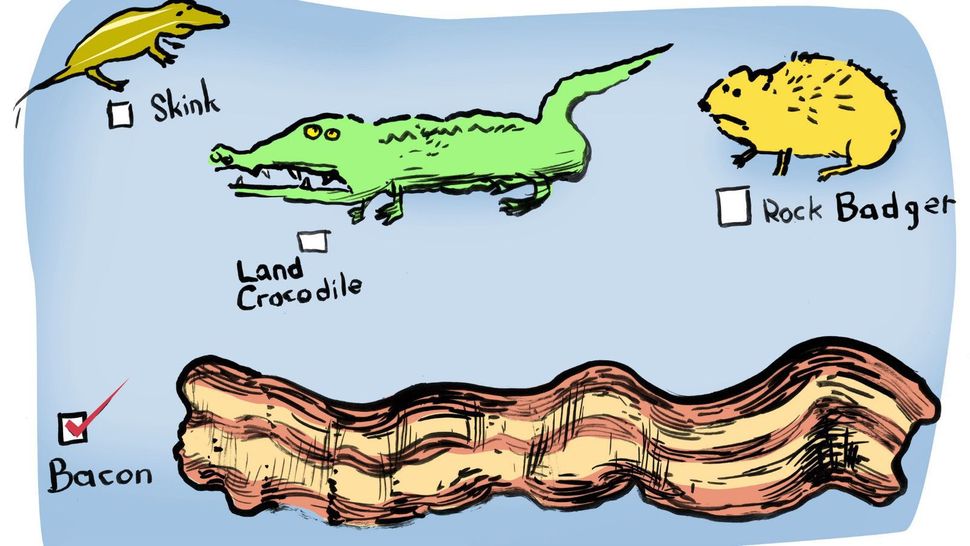 This is the third in a series of pseudonymous essays by The Treyfster. The pieces explore forbidden foods from the point of view of a person who used to keep traditionally kosher. Illustration by Kurt Hoffman

If you’re talking treyf, it doesn’t get much trey-fer than bacon.

That’s not true, of course. The idea that things — certainly things explicitly forbidden in the Torah — could be less treyf and more treyf is, I suspect, an idea more of the goyim than of the Jews. Pigs aren’t more treyf than, let’s say, rock badgers, land crocodiles and skinks, all prohibited by name in Leviticus. (A skink is a kind of lizard. They sometimes have blue tails. So now you know.)

If you really wanted to find something uber-treyf, you might have to start with eating ever min ha-chai, the limb of a living animal, which the Noachide laws ban even non-Jews from eating. Presumably, some of the tribes in pre-historic Canaan had got the same idea as the Maasai people that a farm animal could be its own storage system if you didn’t kill it but just, for example, drank its blood sometimes. I can’t say that ever min ha-chai appeals — it seems unnecessarily cruel in a place with easily accessible refrigeration.

But still, bacon has this aura to it. It’s not just treyf, it’s the universally understood symbol and shortcut to say, “things that Jews aren’t allowed to eat.” Or, in another framing, “the great pleasures of the world from which Jews refrain.” Bacon is, allegedly, the food that most frequently causes vegetarians to fall off the wagon. The smell of bacon — they go on about it. The sound of bacon sizzling in a pan. The crispy, crunchy savoriness. Orgastic, as Fitzgerald might have said.

It took me a while to get to bacon. I was waiting for the right moment, and it came in the form of a long weekend with friends on the coast. Reading novels, drinking wine, going for walks. Someone made bacon and eggs for breakfast one morning, and I took some. I think I said, as I did so, “You know, this is my first ever bacon.” It caused a ripple. There was some concern. “Are you okay?” someone asked. “Do you want to think it over?”

As if this were more to me than the skink or the rock badger or the land crocodile.

I ate it; it was fine: a tasty meat, a nugget of savory, salty greasiness. I’ve tried it again and again since, and although I like it perfectly well, I still can’t see what the fuss is about it. I think the obsession with Jews not being allowed to eat bacon actually has a slightly suspect origin — the bringing together in the mind of Jews and pigs, the encouragement of the association in the very focus on the “forbidden.” Because pigs are thought of as dirty, because of what it means when you call someone a “pig.” I think it’s a bit anti-Semitic, this particular focus on Jews and bacon.

I’ll tell you a secret: When I was kosher I used to cook with smoked goose in place of bacon in recipes, and it’s just as good. It’s the smoke flavor they’re all in love with, not the actual flesh of the pig that carries it. Now, roast pork belly — that’s another matter.