You Say Wonton. I Say Kreplach. 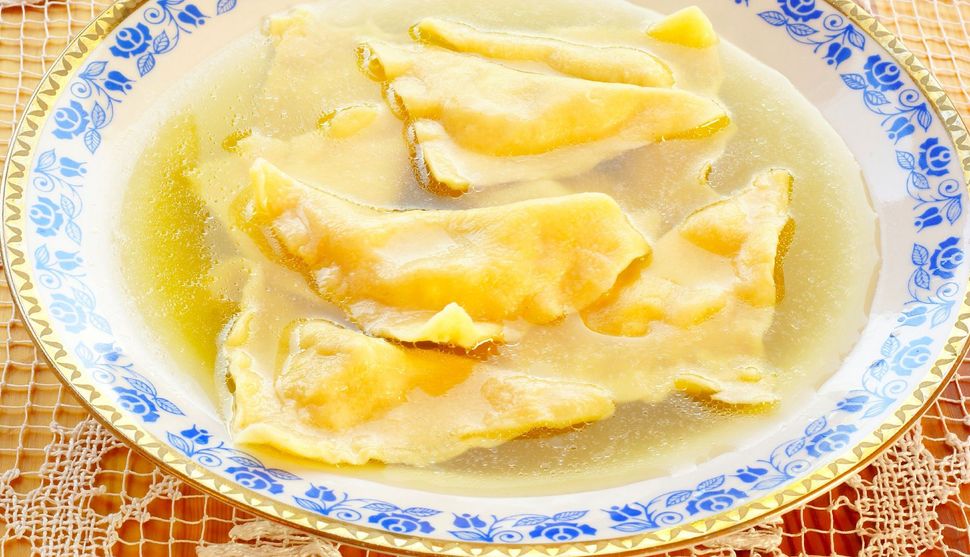 “Pumpernickel is Jewish; white bread is goyish,” said comedian Lenny Bruce in the early 1960s, asserting that Jews instinctively categorize everything as Jewish or not. We agree, especially when it comes to food.

Fast-forward 50 years. Much has changed on the culinary landscape since Bruce got arrested for using the word shmuck onstage. These days, we are just as likely to eat chicken tikka masala as a corned beef special and to order our salmon atop sushi rice instead of a bagel — but we do have fondness for foods that evoke our bubbes’ kitchens, foods that are honorary members of the Tribe. This might explain why the two of us eat chopped liver but not liver paté. Why we make egg salad but not deviled eggs.

Almost every country has a doughy pastry filled with potatoes, vegetables or meat. The Spanish empanada, the Indian samosa and the Italian calzone are all cousins to the knish. Given a choice, our order is: “One kasha knish and one mushroom knish, please.” Knishes make an appearance at many a Yom Kippur break-fast and bar mitzvah cocktail hour, but they weren’t always saved for special occasions. At the turn of the last century, Jewish immigrants brought knishes to work in their lunch boxes, just like Irish workers brought their meat pies, explains Joan Nathan in “Jewish Cooking in America.”

When summer comes, cold soups are on the menu. We remember when borscht, that magenta-colored beet soup, would make an appearance on our childhood dinner tables. The grown-ups would swirl in a dollop of sour cream, and we would cringe in horror as they slurped down the brightly colored liquid.

In the shtetls of Eastern Europe, potatoes and beets were plentiful — hence latkes and kugel (yay!) and borscht (nay!). Leafy greens were few, with the exception of sorrel. That’s why borscht has a cold green cousin named shav. These days, cooks combine spinach with sorrel to make shav, but we don’t know anyone who actually eats it.

Thanks to CSAs (community-supported agriculture programs), farmer’s markets and the bounty of our summer gardens, we have no shortage of vegetables. It’s hard to find a restaurant that doesn’t have gazpacho on its menu. We often order it. Tomatoes, cucumbers and red peppers trump beets any day.

Anyone who has sat through a Seder has had a Jewish macaroon, the ubiquitous Passover sweet. This flourless, chewy, ball-shaped cookie is made with ground nuts, shredded coconut and egg whites. We buy them at the supermarket and eat them straight out of the can.

We wouldn’t have thought to add the adjective Jewish to macaroon until a few years ago, when the classy French-accented macaron stole the spotlight. These elegant, brightly colored meringue-and-almond sandwich cookies come neatly arranged in doily-lined boxes from fancy bakeries. They cost five times as much as the kosher cookie with the similar name, but you’d never confuse the two once you’ve tasted them. And you won’t find a food truck cruising your city selling Jewish macaroons.

Gefilte fish also has a fancy French cousin — the quenelle. Both are made with chopped fish but then they swim in opposite directions. Quenelles are held together with breadcrumbs, gefilte fish with matzo meal. Quenelles are fancy; they can be served with lemon sauce and nestled next to a grilled scallop. Gefilte fish are dumped from the gel onto a lettuce leaf and dressed up with a carrot curl. We found a recipe for quenelles in “Larousse Gastronomique,” a bible of French cuisine; our recipe for gefilte fish is scrawled on a food-stained 3×5 card that Aunt Miriam pressed into our hand at Passover in April 1986.

We would never ask the deli guy for a half-pound of smoked salmon. We call it lox, which is the Yiddish word for salmon. You can distinguish the two by the company they keep. Lox is served atop a bagel shmeared with cream cheese. If you’re fancy, you can add a little red onion and a slice of cucumber. Smoked salmon sits alongside brown bread triangles. It is fancy, so it’s served with capers and lemon slices.

Texas barbecue is described as meat cooked “low and slow” — which sounds just like the way we cook brisket. Brisket is a particular cut of beef; how you cook it and what you serve it with determines its ethnicity. If you rub it with spices and smoke it over mesquite, it becomes a cowboy brisket sandwich, served on a paper plate alongside beans. If you roast it on cut-up onions and potatoes, put some ketchup on top, cover the pan with silver foil, and put it in the oven for hours, it becomes Jewish holiday fare, served on a china dinner plate beside kugel. Much like the Friday night roasted chicken, there’s nothing uniquely Jewish about brisket — except that we say so.

We have a lot to say: When we wait in line at Starbucks for our tall skim lattes, we want to tell the barista that the jar of biscotti on the counter is mislabeled. We call it mandelbrodt.

Joyce Eisenberg and Ellen Scolnic are the authors of the (JPS, 2006). Visit TheWordMavens.wordpress.com and follow them on Twitter @TheWordMavens

You Say Wonton. I Say Kreplach.