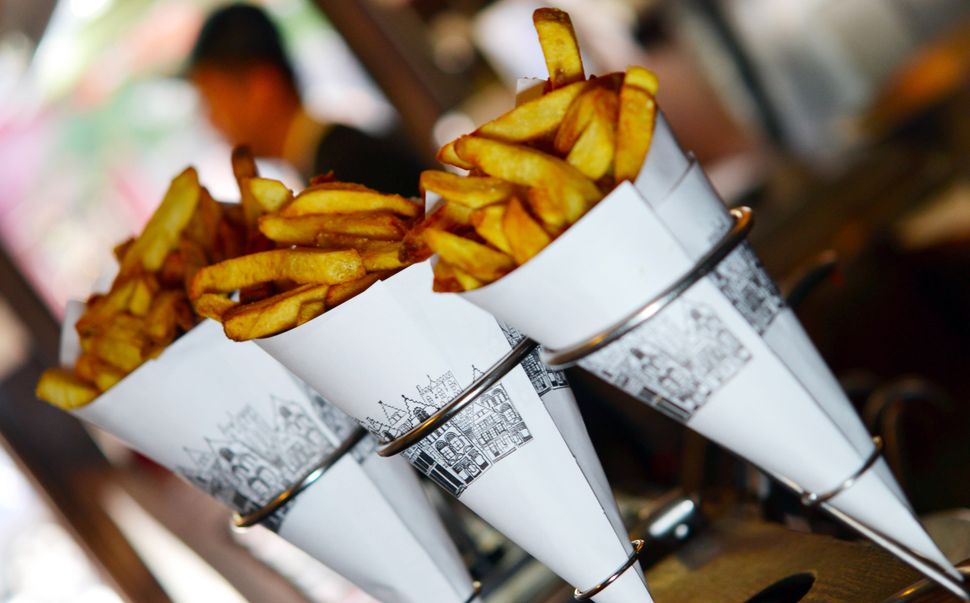 Golden fries served in a signature paper cone at the original Pommes Frites, which was destroyed in a gas explosion on the Lower East Side last spring.

For weeks after the devastating March explosion that destroyed an East Village block, Omer Shorshi kept thinking he had to get to his restaurant.

Moments later, Shorshi would realize why he didn’t need to go: There was no restaurant. , his hugely popular Belgian-fries counter, was destroyed in the blast.

“After 18 years of working seven days a week, it was really weird,” the Israeli-born Shorshi told the Forward. “I kept thinking about the day-to-day of running it, and all the projects I wanted to work on. And one day, it finally hit me that there was no restaurant.” 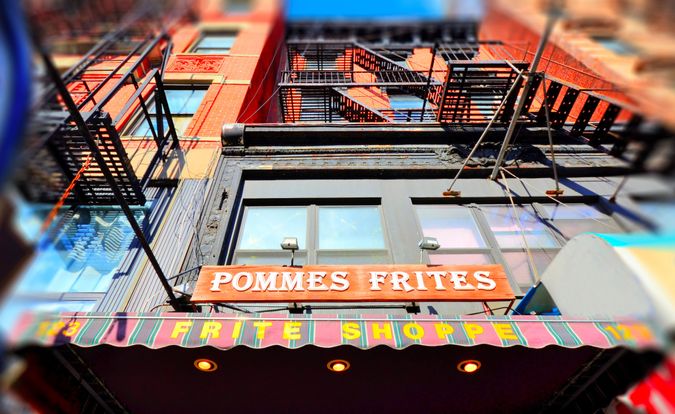 But Shorshi and business partner Suzanne Levinson may soon — happily — find themselves back in the daily grind. To much fanfare online, where fans have mourned the loss of a beloved eatery, the pair last week signed a lease on an 800-square-foot space at 128 MacDougal Street in Manhattan’s West Village.

Though they’ll pay nearly double in rent, the new spot is 300 square feet larger than the original. And starting over means Shorshi and Levinson can build their new eatery to spec.

“We’re hoping for more equipment to streamline the operation and make it faster,” he said. “We’ll be able to run more customers when it gets busy.” At the East Village location, lines would spill onto Second Avenue, where customers would scarf their just-cooked fries from Pommes Frites’ signature paper cones.

Not everyone’s thrilled about the relocation. Neighbors had petitioned Shorshi and Levinson to stay. A rep from New York City Council member Rosie Mendez’s office called to plead the East Village’s case.

“We really wanted to stay, and we know the move will disappoint a lot of people,” Shorshi said. “We just couldn’t find a place we could afford and have high traffic. This new space came up on a busy street with a lot of traffic. More than half of our business comes from tourists, and there are a lot of tourists around MacDougal. NYU is right there, too.” The pair will also apply for a beer and liquor license for the first time. “Hopefully, that will help us keep the ticket price down,” he said. “But we’re not planning to be a bar.”

Life since the blast has been about “signing papers” for Shorshi and Levinson. “I have signed so many in the last month. It’s a lot of work to get our insurance to come through — we had to dig through 18 years of receipts. It’s so expensive to open a restaurant now. We’re spending at least $300,000, which insurance won’t cover.” Shorshi and Levinson will also launch a crowdfunding campaign on Indiegogo next month. “A lot of customers want to help and be a part of it,” he said. “And it’s good marketing.”

Though he always loved food — he learned how to cook at the knee of his gourmand mother — Shorshi fell into the restaurant business by accident. “In Israel, when I was growing up, working in a restaurant or being a chef wasn’t a possibility,” he recalled. “I went to school for IT [information technology], and I knew I wouldn’t stay in IT. But I never thought restaurants would become my career.”

But he clearly had a knack. After his Israeli army service, Shorshi took a job managing the failing bar at kibbutz Beit HaEmek, where he grew up. Within a year and a half, it was turning a profit.

“Everything was volunteer, so workers worked for free, and people felt they could drink as much as they wanted,” he laughed. “We had to change the workers; change the atmosphere. We had a lot of support from the community. Everybody wanted the change.”

That experience came in handy when he joined Levinson in 2000. But the pair still had trouble getting Pommes Frites over a hump. “We were working really hard, but it wasn’t a success,” he recalled. “I knew something was missing.”

So Shorshi enrolled in a restaurant management course at Manhattan’s Institute of Culinary Education. “That really helped,” he said. “I learned the science behind restaurants — controlling costs, portions, customer service, everything. Even though we had a great product, it was hard to turn a profit. The course changed that.”

That product will continue to star at Pommes Frites new home when it opens this fall. Levinson and Shorshi source potatoes from a farm in Quebec “that grows potatoes especially for fries,” Shorshi said. “They store them the right way. You can store potatoes as long as four or five months, and actually, that’s when they’re at their best. Then, it’s just eight hours from the farm to our store.”

Out of season, when the Canadian supplier is dormant, Pommes Frites uses russet potatoes from Idaho. “But that’s much trickier,” Shorshe said. “It’s big corporate farms, it takes five days to ship the potatoes on a train, and we don’t know what’s going on with storage.” Shorshi and Levinson test — and often reject — those spuds.

A sunflower-soy oil mix deep-fries the final product, which emerges slightly crisp outside; steaming and soft inside. “The oils have no flavor themselves, so you really taste the potato,” Shorshi said. The Belgian-style frites have earned a cult following. After its first location closed, “we started hearing from people all over the world,” he recalled. “It’s really bizarre.”

What’s the chance of opening a Pommes Frites in Israel, the Forward asked? “I don’t think so,” Shorshi said. “I moved here in ’94. And I’m staying.”