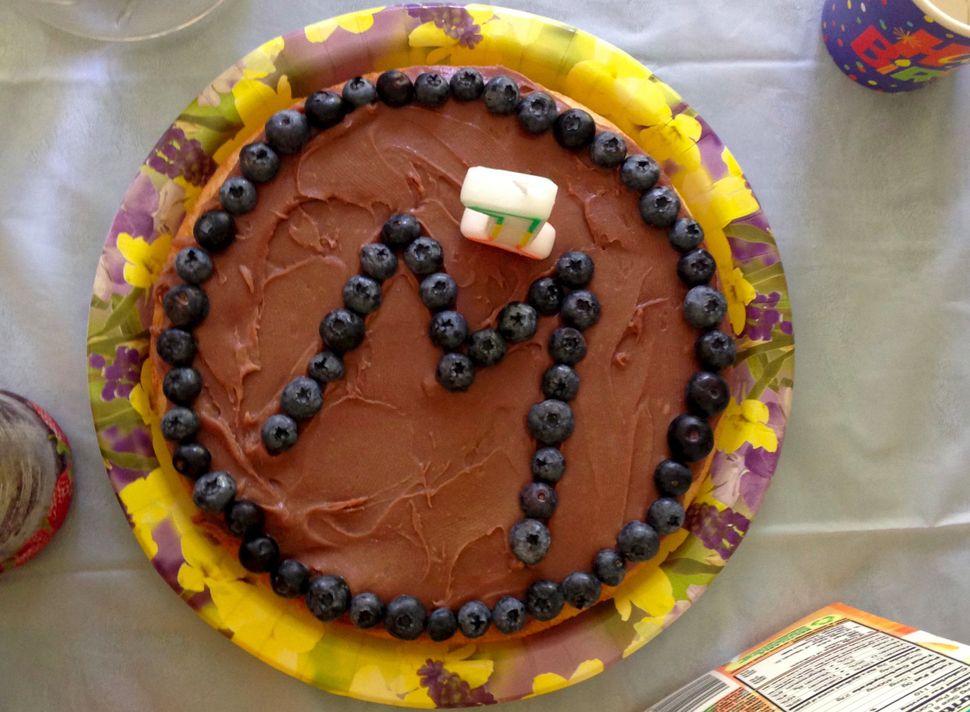 For her baby’s first birthday, Leah Koenig made a chocolate cake decorated with blueberries that her husband’s parents picked at a nearby fruit farm.

Our baby boy Max turned one last Saturday. Somehow, without adequate warning, the tiny, wrinkled bundle we so gingerly cradled during the first weeks of his life had reached the brink of toddlerhood.

The whole week prior to the big day, I found myself having flashbacks — and not joyful ones. I saw images of myself, hobbling and heavy, as I spent the last three months of my pregnancy navigating New York City (but really mostly the apartment) on crutches with a broken foot. I remembered the hours spent with my body off the couch, with said foot angled awkwardly askew, trying to coax Max to flip from breech position to head down.

I thought about the moment the OB told Yoshie and me, nearly three weeks before Max was due, that he likely was not going to turn around — and besides, my fluids were dangerously low, and there was a cord-around-the-neck situation brewing, and we should really go to the operating room and have him out via C-section NOW.

I flashed through to the many sleep-interrupted nights — from blurry-eyed feedings and post C-section pain at the beginning and, in more recent months, from a disorienting and prolonged bout of anxiety that I never would have anticipated and am only starting to surface from now.

But when the day of Max’s birthday arrived, my thoughts focused in on another moment. This one was in an operating room with heavy, drugged legs, a blue paper screen shielding me from the surgery being performed a foot away on my belly, and Yoshie, sitting in scrubs at my head, saying encouraging words. And then, from nothing, there was everything: the piercing cry of a baby. Our son. And in that moment — the most primal one I have ever experienced, despite the clinical setting — I remember crying through the fog, “Bring me my baby.”

And they did. And so on Sunday, we had brunch.

We were down in Washington D.C. with my in-laws, who had pulled together all the trimmings — a baby pool and bubbles, party blowers and a fat, festive “1” candle. Together, while Max pushed his walker around the kitchen, they flipped pancakes, scrambled eggs, chopped avocado and cucumbers into a salad and brewed coffee. Meanwhile, I spread a cake with chocolate frosting and decorated it with blueberries my husband’s parents had picked at a nearby fruit farm.

It was a fitting feast for our little man. Exactly a month before he was born (when we still thought he was going to be an August baby), I published an essay in the Forward called A Letter to My Jewish Baby. I had no idea what to expect out of motherhood. But as a food writer, I felt safe sharing some hopes for Max as a future eater. The short of it is, I wanted him to have a positive relationship with food — to relish it, and also search for the deeper connections to community, the earth and his Jewish heritage.

At a year in, it is a delight to watch him eat. He wants his food with serious urgency, and does not hesitate to let me know. He grabs fistfuls of chopped chicken and hunks of fleshy peach and mashes them into his maw. He plucks smaller morsels with his index finger and thumb from the tray — corn kernels, pinto beans, cereal — and angles them home. He takes the spoon from me, deposits whatever mush of sweet potatoes or slurp of soup is on it and then holds it back out for me to reload. He eats with relish most everything put in front of him, though some former obsessions, like avocado, he has begun to reject.

On the morning after his birthday, Max ate brunch with his usual gusto — eggs and watermelon, baked salmon left over from Shabbat lunch and, of course, cake. Yoshie and I blew out the candle, while he reached for his beloved blueberries, and ended up with a handful, and then mouthful, of frosting.

Despite the months of practice, I have no more of a clue today about what the future holds than I did on the day Max was born. I suspect I never will. But for now, I know that on his first birthday, Max ate cake for breakfast. That’s my boy.