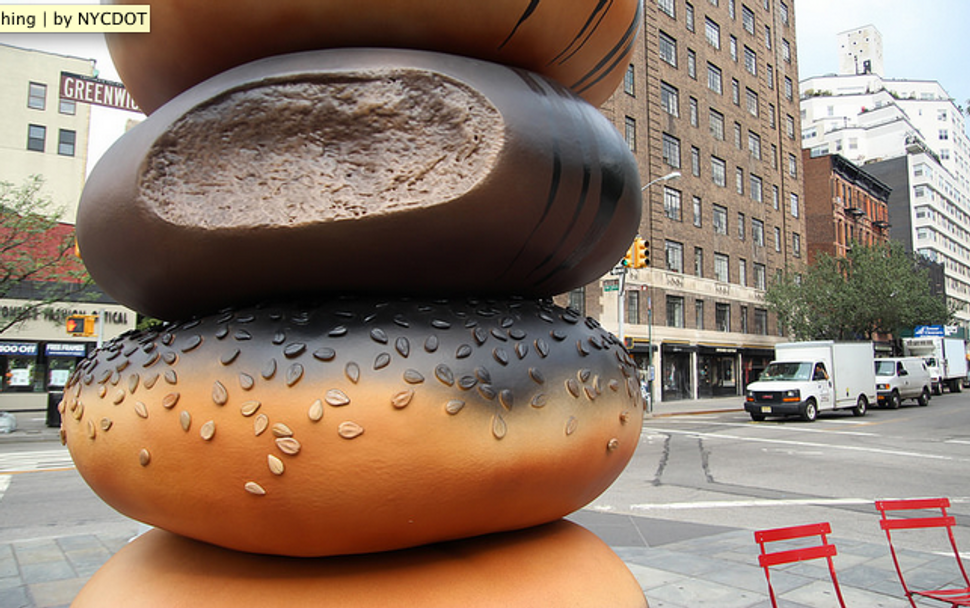 “Everything,” a sculpture by Hanna Liden, is on view at 6th Avenue and Christopher Street.

With hyper-cool bagelries like , Black Seed and Sadelle’s, you could say New York’s having an artisan-bagel moment.

The Swedish-born artist just unveiled nine giant bagel sculptures as part of a public-art project in Manhattan. Detailed down to their oversized sesame seeds, shriveled onion bits and toasted edges, the bagels have taken up residence in the West Village’s Hudson River Park through October 20. Another couple of bagels will occupy a spot on lower Sixth Avenue until August 24. 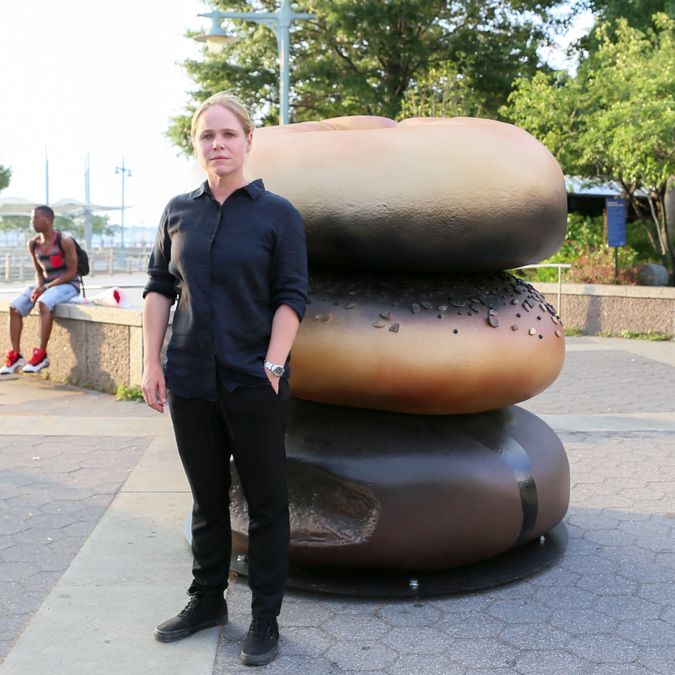 Artist Hanna Liden in front of one of her sculptures. Image by Courtesy of BFA

Though Liden didn’t taste her first bagel until emigrating from Sweden in 1998 — “It was a sesame bagel with lox, which I got in the Meatpacking District,” she told the Forward — the bagel has come to represent New York itself for the artist. Liden was likely referring to late, lamented bagel store Dizzy Izzy’s, which dominated the corner of 14th and Washington Streets until the 1990s.

“My public project in New York had to be about New York,” she said. “Tacos are not New York. Pizza slices are, but the bagel has a better shape.”

The four-foot-wide, industrial-foam sculptures are being presented by the Art Production Fund, a New York non-profit “dedicated to commissioning and producing ambitious public art projects, reaching new audiences and expanding awareness through contemporary art.” In a press release, Liden said, “the bagel — a circle with no beginning and no end — is evocative of the eternal cycle of city life. The black spray paint is a romantic tribute to the darkness and grime, which are essential and beautiful characteristics of our city.”

Though it’s nowhere in any promotion or text accompanying the bagels, Liden is also aware of the bagel’s Jewish lineage. “Last year I found out my great-grandmother was born in a Jewish Brooklyn hospital,” she said. “Yes, I considered that aspect, but, the bagel goes beyond.”

Indirectly, she’s also tipping a hat to immigrants who brought bagels Stateside from Europe, Liden said. “Yes, immigrants built this city. I’m proud to be in that lineage. New York City is the best city in the world.”

Now, if someone could just sculpt a giant schmear…