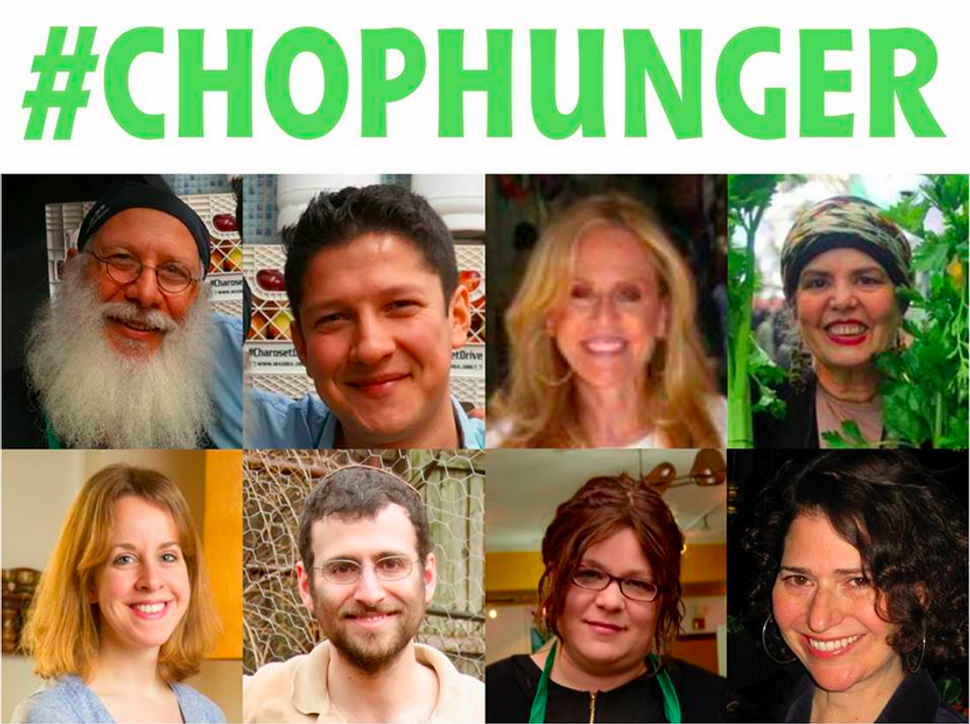 Forward food editor Liza Schoenfein just fulfilled her dream of becoming a judge on Chopped — or in this case, Chop-Hunger, a competition that served as a benefit for Masbia, a kosher soup kitchen that delivers nutritious kosher meals with a hearty side of dignity. (That’s her, lower right.)

I never get tired of the Food Network show Chopped, which I tend to binge watch when I’m tired or stressed. My younger son, Teddy, is also a fan, and he and I can sit through multiple episodes after a long day, happily critiquing the performances of the contestants as they cook their way through their mystery basket ingredients.

Teddy, who is a loyal fan of his mother’s cooking, sometimes remarks that I should compete on the show. But as well honed as my kitchen skills might be, they are home-cook skills, recipe developer skills, food editor skills — not those of a restaurant chef. And honestly, it may be stress-reducing to watch the show, but being a contestant would probably give me a nervous breakdown.

Being a judge, on the other hand, does hold some appeal — sitting there watching the action; then tasting and evaluating the results… that’s something I could get into.

So last night, that’s what I did.

A few days before the competition, I sat down with the event’s host, Avi Levy, to talk about what I’d be looking for from the competitors.

Well, it wasn’t the Food Network’s Chopped — it was an event called Chop-Hunger, held in the Lincoln Square Synagogue as a fundraiser to benefit the Masbia Soup Kitchen Network, a 10-year-old organization that feeds New York’s hungry out of three locations in Brooklyn and Queens, each decorated and arranged to look and feel like a restaurant — a way of offering a dignified dining experience.

At Masbia, chef Ruben Diaz determines the day’s menu each morning after he sees what food has been donated by organizations such as City Harvest. He and his staff regularly make delicious, nutritious kosher meals from humble ingredients — the organization delivers one and a half million meals a year, according to the organization’s founder, Alexander Rapaport.

“Those popular episodes on cable television are great entertainment,” Diaz said. “But for those of us at Masbia, which relies on public donations to prepare thousands of meals weekly, those challenges are our reality.”

Apparently Masbia once received a donation of two pallets of rutabaga. “It was a wonderfully generous gift, but what do you do with massive quantities of rutabaga?” Diaz asked. “How do you prepare a vegetable that most of us wouldn’t even recognize and make it appealing to the many people who come through our doors so that we can serve them with dignity?” 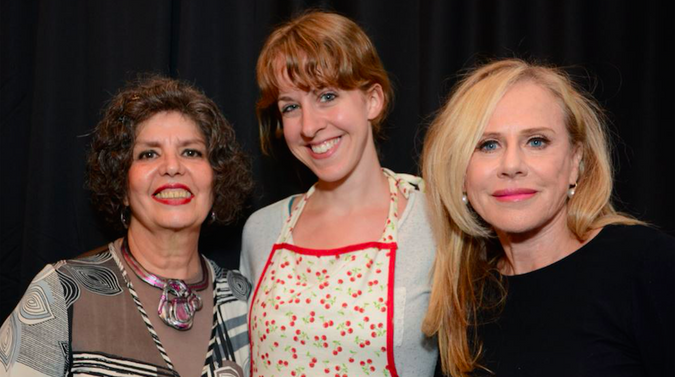 Each cook would create a meal — just one plate — using the same humble ingredients — in this case frozen tilapia, rice and apples. There was a very limited pantry with items the cooks could share, which happily included a gorgeous assortment of fresh summer vegetables — cherry tomatoes, rainbow carrots and baby squash — that had been a last-minute donation that very day. And then a mystery ingredient was introduced. Can you guess? Yup, rutabaga. The instruction to the three contestants was that it had to be featured prominently in the dish.

The chefs manned cooking stations each set up with a tiny electric oven, a couple of burners, a few pots and pans (and very few lids) and a smattering of other essentials. They had 30 minutes.

I sat at the judges’ table — enjoying my vantage point on a high stool just above the action — with fellow judges Shifra Klein, editor-in-chief of Joy of Kosher magazine, and Naftali Hanau, CEO of Grow and Behold, which produces OU Glatt Kosher pastured meats raised on small family-run farms. The event was produced by The Center for Kosher Culinary Arts supplied the wine. Chef Avi Levy, host of Avi’s Kosher Kitchen, did a great job playing Ted Allen’s part as the evening’s gregarious and charismatic host.

Speaking of Ted Allen, I asked him how he felt about Masbia using the Chopped concept for its fundraiser:

“I couldn’t be more thrilled that Masbia is using a Chopped format to raise funds for its vital work!” Allen said. “Alex Rapoport has created a national model for feeding hungry, homeless people with the dignity we all deserve; a restaurant-style setting, with a host station, individual tables, menus and beautiful cooking.”

I hadn’t realized that Allen already knew Alex Rappaport (though I probably should have, since Allen’s cookbook “In My Kitchen” was being offered as a raffle item at the benefit).

“It was my enormous privilege to share a stage with Alex (and international star chef Jose Andres) at the 2014 Roots Conference at the Culinary Vegetable Institute in Ohio, where his rousing message of empowerment brought down the house — and secured a promise from CVI’s director, Farmer Lee Jones, of regular shipments of gorgeous produce to Masbia’s kitchen,” Allen said. “And he has followed through on that pledge, allowing the chefs at Masbia to offer the same world class vegetable ingredients used at the finest 5-star restaurants around the globe.”

Back at Chop-Hunger, it was amazing to watch the three incredible cooks go at it — Koenig brought her Ashkenazi sensibility to her food, whipping up a delicious apple and rutabaga mash to go with lovely rice tossed with baby vegetables. She coaxed the most flavor out of her frozen fish, I thought, coating it in a bright sweet and sour sauce of citrus juice, soy, sautéed onions and I don’t remember what else. But I can say one thing: She didn’t take much out of the pantry (if anything) and because she stuck so rigorously to the main ingredients while creating a delicious plate — an extraordinary accomplishment — she won the prize for frugality.

Moroccan-born Kirschenbaum’s dish was a riot of gorgeous color: glistening sautéed vegetables — cherry tomatoes, rutabaga and summer squash — stood out next to a great “risotto” and fish spiced with cinnamon. There was also a dramatic-looking side of tomato and black olives. Kirschenbaum won the prize for presentation.

Dweck won the creativity prize, making a fine rutabaga-cabbage kimchi — talk about the diaspora! The centerpiece of her dish was a sublime fish and rice mixture tossed with a few chickpeas from the pantry, delicately seasoned with paprika and cinnamon and sprinkled with toasted sesame seeds. She sautéed apples, rutabaga and baby carrots, whose delicate colors glimmered on the plate.

The prize for taste, arguably the most important of the night, was give to — drumroll, please — all three contestants! Okay, you could argue that we judges failed in our task, but honestly, you weren’t up there tasting these dishes, they were all incredible. As is Masbia.

As Poopa Dweck said last night: In the end, it wasn’t a competition; it was a celebration.