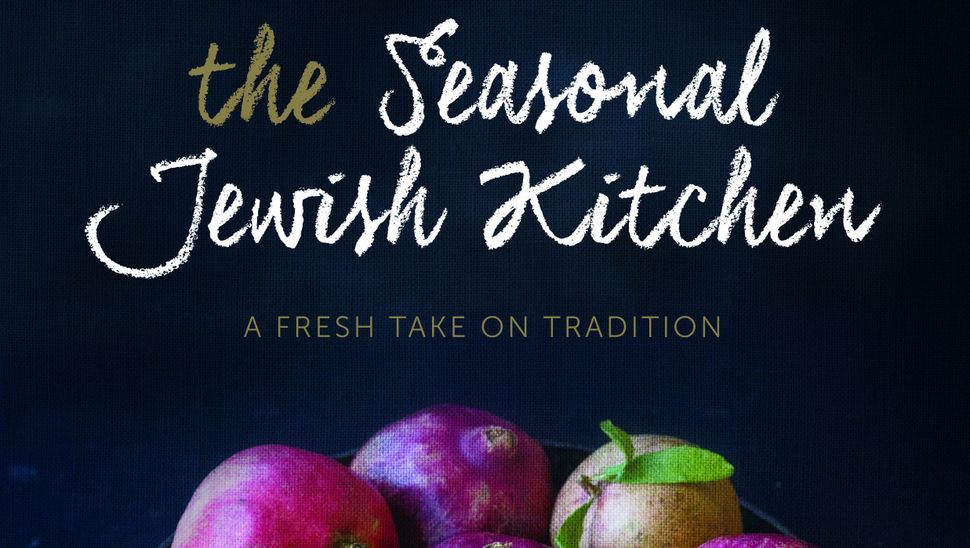 This is an occasional column in which the writer evaluates a new cookbook by making some of its recipes, sharing the dishes with friends and asking her guests what they think of the results. She recently cooked her way through “The Seasonal Jewish Kitchen: A Fresh Take on Tradition,” by Amelia Saltsman.

With an Iraqi father and a Romanian mother who met in Israel, Amelia Saltsman is equally at home with the cuisines of Ashkenazi and Mizrahi Jews.

In the introduction to her new cookbook, “The Seasonal Jewish Kitchen: A Fresh Take on Tradition” (Sterling Epicure), Saltsman writes that one of her grandmothers cooked with parsley; the other cilantro. One cooked potatoes; the other, rice. Her Iraqi grandmother fried zengoula, Iraqi funnel cakes, while her Romanian grandpa cut polenta with cheese by using string.

This culinary and cultural mishmash, paired with impressive seasonal-foods writing cred, (Saltsman’s first book was “The Santa Monica Farmers’ Market Cookbook”) make this author eminently qualified to write a modern Jewish cookbook that celebrates both the seasons and the flavors of the Diaspora in much the same way a fresh crop of popular Jewish chefs are doing at restaurants in the U.S. and Israel.

Flavorful Middle Eastern ingredients such as silan (date syrup), harissa, za’atar and tahini are used here in abundance, while schmaltz and macaroons find their place here as well.

Saltsman, who was born and raised in Los Angeles, where she still lives, is a regular contributor to “Good Food,” a radio show on L.A.’s NPR affiliate, KCRW. It was while sharing her recipes — and receiving feedback— on the program’s blog and her own that “it dawned on me that many cooks are seeking the kind of Jewish cooking I do; modern, seasonal, ingredient-driven, lighter and brighter, relaxed rather than formal and reflective of the many flavors of the Jewish Diaspora,” she writes.

While Saltsman is not religious, she said that when she was dividing the book into seasons, it was easy to see how well they corresponded to those of the Jewish calendar. And while this is not a kosher cookbook, Saltsman deliberately does not mix dairy with meat, and avoids pork and shellfish. So in a sense, it’s kosher by default. And while it’s also not a holiday cookbook per se, she does offer holiday menus, often plentiful vegetarian options. (The book’s foreword is written by vegetarian-cooking authority Deborah Madison.)

I decided to cook Salsman’s vegetarian Rosh Hashanah menu for this Taste Test. The menu was as follows: sweet potato and butternut squash mini-latkes with labneh and smoky harissa; rapini and rice soup; toasted Israeli couscous in winter squash cases; autumn slaw with beets, carrots and kohlrabi; and Aunt Sarah’s honey and apple cake. Another dessert, an apple, pear and concord grape galette in rye pastry with ginger cream intrigued me more, so I swapped that for the cake.

Frying latkes — even non-traditional ones — felt odd on a warm late-summer evening. While my friend Adam felt these latkes were light and flavorful, everyone agreed they felt just as strange eating them at Rosh Hashanah as I did making them. (As the chef, I also felt that I would not want to be in a hot, oil-scented kitchen frying them as guests arrived on Rosh Hashanah — while at Chanukah it’s cooler, and things are much more casual.)

For the soup, onions and broccoli rabe (or rapini) are cooked with risotto rice in vegetarian broth and topped with grated Parmesan. (A meat version uses chicken stock with hard-boiled eggs for the garnish rather than cheese.)

My friend Fred said it was “surprisingly good for how simple it was.” But we didn’t feel it was exceptionally chag-worthy. Everyone thought it could use something else to improve it: a squeeze of lemon, tomatoes, red-pepper flakes, and crispy fried onions were all mentioned.

For the main dish of Israeli couscous in winter squash cases, the couscous is cooked with diced onion, squash and dried cranberries and spiced with orange and cinnamon. While my friend Rebekah liked that each person gets her own half squash, she felt it was more of a side dish than a main. (We all noticed there was no protein in this menu.) Fred felt it was better suited to Thanksgiving — and we all agreed.

The autumnal slaw, in which grated beets, carrots and kohlrabi are combined with tart apples and parsley and tossed in a lemon-honey dressing with a splash of toasted sesame oil was not only beautiful to behold but was equally vibrant to the palate.

Rebekah’s husband, Chen, noted that it was traditional to eat a new fruit for Rosh Hashanah — one you haven’t eaten yet that season — and kohlrabi fit the bill. Rebekah thought the sesame oil really made the flavors pop. I would advise adding toasted pumpkin or sunflower seeds, which will give it a welcome crunch, but it’s delicious as is.

Our last course was one stunner of a galette.

Rye flour is added to regular flour to make the crust, and once rolled out, Italian amaretti (almond cookies) are crumbled along the bottom. Diced apples, pears and whole grapes are tossed with a mixture of dark honey, lemon juice and zest and Calvados (apple brandy). After the sides of the crust are folded around the fruit, the whole thing is brushed with melted butter; then sugar is sprinkled on top. To up the decadence factor, crème frâiche is whipped with heavy cream and sweetened with a bit of sugar, then spiked with bits of candied ginger.

This pastry may not be for those who favor especially sweet desserts. But for those who appreciate a sophisticated one, I heartily recommend making this. The fact that there were so many competing flavors was noticed by everyone, and everyone agreed that it worked.

A piece of advice on making the galette: While Saltsman says to melt four tablespoons of butter for brushing on the pastry, I found two to be more than adequate, and even so — since it must be baked on a rimless baking sheet (or on the backside of one with a rim) — quite a bit of butter dripped to the bottom of my oven, creating a lot of smoke and a big mess to clean later.

But oh, that was a small price to pay for such a magnificent dessert. I will definitely be making this one again.

Alix Wall is a freelance writer and personal chef in the Bay Area and beyond. Her blog is theorganicepicure.com