When in Rome, Do Rosh Hashanah 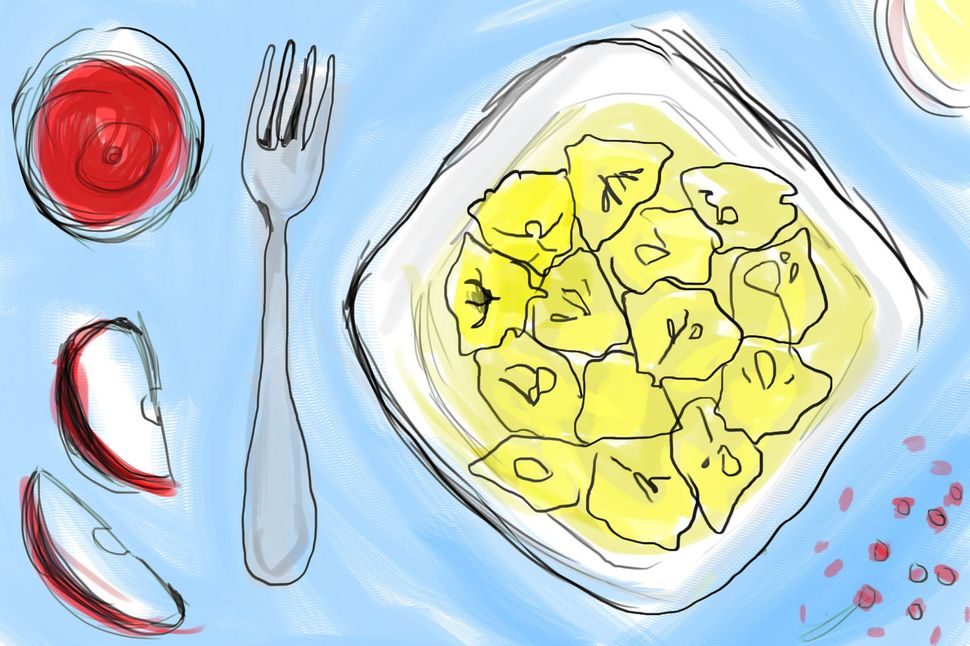 Most people envision a trip to Europe as an opportunity to visit museums, look at architecture, tour historical sites and occasionally meander through bucolic lands off the beaten trail. Often the trip includes more than one country, but rarely does it include eight countries and nine cities in seventeen days. That was my experience recently, when I accompanied my husband on a lecture tour throughout Europe. He would be busy, and business regulations prevented me from joining him for many meals, so I had to be creative with my free time.

As a food writer, I relish any opportunity to explore and taste a country’s culinary offerings, and since my specialty is historical Jewish cuisine, the opportunity to meet with Jewish communities that have existed for millennia was compelling. I contacted the , the international arm of the Reform Jewish Movement, and requested the names of Reform/Progressive synagogues in the cities I would be visiting. I informed the World Union that I wanted to meet with members of these synagogues and explore their personal culinary traditions.

I assumed that each group would have different stories to tell based on their experiences during World War II and the subsequent rise of Communism a few years later. I offered to teach a cooking class, take a few members of the local congregation out to dinner or go to someone’s home to discuss their personal stories. I met with Progressive Jews in Copenhagen and Vienna, had lunch with four Jewish women in Munich and cooked with congregants in Warsaw and Rome.

In Rome I was excited to be invited to the beautiful Monteverde home of Daniela Gean, a warm, patient and intelligent woman whose passion for food and all it’s societal implications led her to become chef/owner of her own Mediterranean and Jewish (not kosher) restaurant, Meze’ Bistrot. As a member of Beth Hillel Roma, she invited me to join a few of her fellow congregants at her home to watch them prepare some traditional dishes from their homeland.

Daniela and Hamos Guetta, an entrepreneur and part time culinary guru (many of his cooking lessons are on You Tube), are Libyan Jews who immigrated to Rome after the pogrom following the ’67 Arab-Israeli war. Hamos informed me that at one time more than 50,000 Jews lived in Libya — and that now fewer than 100 do so.

Esther Livdi was of Russian decent but was born in Argentina and left after the military junta began targeting Jews in 1976. Her father procured work in Rome and the family immigrated to Italy.

Franca Eckert-Cohen’s family was from northern Italy. This sincere, engaging woman was in charge of multicultural policy under former Roman mayor Veltroni and in January 2014 helped start the progressive synagogue, Beth Hillel Roma. The newly formed board elected her their first president.

As I watched the various dishes being prepared, I realized that all had the commonality of being foods traditionally served for Rosh Hashanah (and often served on Shabbat as well). Daniela made two dishes, mafrum, a Libyan dish of ground meat and spices stuffed into the center of assorted hollowed out vegetables and then simmered in a tomato sauce, and brik, fried egg sandwiched inside of freshly made warka, a thin, translucent dough. Hamos made a Tripolian fish dish, haraimi, made with whole fish steaks simmered in a very spicy, rich paprika sauce. Franca made tortellini stuffed with sautéed chicken and Esther made a honey cake unlike any of the honey cakes I have ever tasted.

We know that food preparation in the Jewish home often tells a story. For Rosh Hashanah we see many of our hopes for the coming year interpreted in our dishes. Stuffing the vegetables in mafrum, filling the warka with egg (symbolic of renewal, fertility and growth), and the tortellini (which Franca makes 500 to 600 at a time for Rosh Hashanah) all represent our wish that our fate should be “sealed” for good in the book of life for the coming year. Fish is always served on holiday tables as well as Shabbat to represent prosperity and renewal, and at Rosh Hashanah the head of the fish is often presented at a Sephardic meal to symbolize the hope that we should be at the “head” of a successful life.

While the dishes were being assembled in Daniela’s spacious white-tiled kitchen, Hamos had his movie camera hoisted on a tripod and directed the filming of the various preparations with an enthusiasm that resembled Emeril Lagasse channeling Cecil B. DeMille. He filmed the lively interactions between this enthusiastic observer and the cooks who took pains to accommodate my scant Italian vocabulary while they explained the cooking process of their recipe in English.

When the food was ready, we went out to Daniela’s large enclosed patio to sit at her rectangular table under the stars while we tasted the results of the cooking frenzy. Lights strung from house to fence twinkled against the dark sky laden with its own pinpoints of light. Potted roses, herbs and other colorful plants of various sizes were randomly placed at different heights and locations throughout the patio and a balmy breeze wafted over us as we shared some wine, good food and a tradition that goes all the way back to Abraham.

I was a stranger in their midst, they took me into their home and their lives, sharing their food and stories. I was given lasting memories of being part of a Jewish community that spanned the globe as well as the years. Most of all, I was provided a view into the lives of modern day Jews who are striving to make their Jewish lives richer and more fulfilling in countries that gave them a safe haven from persecution and annihilation. I am forever grateful for this experience.

1) Soak the caraway in warm water while you prepare the sauce.

2) Heat a large frying pan for 20 seconds over high heat. Add olive oil and heat for another 15 seconds. Reduce the heat to medium high.

3) Add minced garlic, salt and both paprikas and sauté for 1 minute until fragrant. Add caraway seed and any soaking water and sauté for an additional minute to combine flavors.

4) Add lemon juice, ½ cup water and tomato paste to the pan and stir until well combined. Cover pan and simmer sauce for 5 minutes over medium heat. Check to make sure that sauce is not sticking. Add additional water if necessary to create a sauce the consistency of thick tomato sauce.

5) Wash fish to remove any adhering scales. Pat dry with paper towels and lightly salt on both sides.

6) Place the fish fillets or steaks in the sauce. Cover the pan and gently simmer for 7–12 minutes, depending on the thickness of your fish (estimate 10 minutes per inch of thickness of fish).

7) When fish is done, sprinkle the cumin into the pan, gently combine and serve as is or garnish with chopped fresh cilantro leaves and/or a piece of lemon.

Traditional Honey cake, as we know it in the States, is a dark, dense loaf made with honey, coffee and brandy. The following version, introduced by a Russian grandmother to her Argentinian-born and Roman-raised granddaughter Esther Livdi, gains much of its sweetness from caramelized sugar and orange juice. Perhaps the ingredients tell a tale of frugality, using the sugar to create the dark, rich color while minimizing the use of expensive honey? Using too small a loaf pan results in overcooking the sides and top of the cake while waiting for the interior to cook. My recommendation is to use a 9-inch round cake pan or a 10-inch loaf pan for best results.

1) Place sugar and water in a 3-quart saucepan and stir over medium high heat until mixture is clear. Let solution boil undisturbed until the bubbles get thicker and slower and then remove from heat when it turns golden brown.

2) Immediately add the juice, zest, honey, oil, remaining sugar and cinnamon to the pan. The caramelized sugar might harden so return the saucepan to the stove and stir over medium heat until completely dissolved.

3) Remove from the heat, cover with a lid, and set aside overnight or up to 24 hours before making the cake.

4) Pre-heat your oven to 350˚ F. Lightly oil a long loaf pan or 9-inch round cake pan. Set aside while you make the batter.

5) Using a hand held mixer or wire whisk, beat the eggs into the honey/sugar mixture until light in color and aerated.

6) Combine the flour, baking powder and salt in a 1-quart bowl. Add this mixture to the bowl and stir just until completely incorporated.

7) Pour batter into prepared pan. Sprinkle top of cake with the additional sugar. Place cake in the lower middle third of your oven and bake for 30–45 minutes or until a toothpick inserted into the center of the cake comes out clean.

NOTE: The depth of the batter will make a big difference in baking time and all ovens are different. Cakes with high sugar content will brown and cook faster on the outside. Your cake might seem a little crisp on the outside but the honey content will make it more moist, albeit more dense, after a day or so. Keeps well in a plastic freezer bag or airtight container for a week and definitely tastes even better the next day!

When in Rome, Do Rosh Hashanah