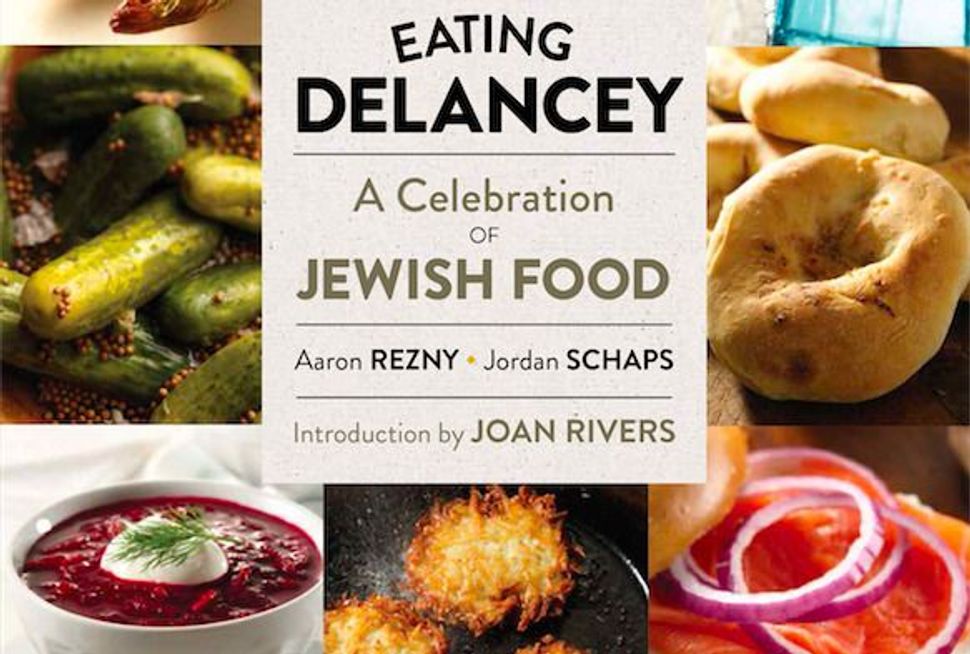 Image by Courtesy of Powerhouse Books

— what a super name for a book. I’ve had this relatively new volume by Aaron Rezny and Jordan Schaps on my desk for a little while now, and I keep dipping back into it because it’s so rich in delicious tidbits about the Jewish foodways of New York’s Lower East Side.

It’s kind of a history and kind of a cookbook — though both of these classifications fail to capture its essence and make it sound weightier than it is. The subhead, “A Celebration of Jewish Food,” says it best.

The book reminds me of an animated conversation over a festive Jewish meal: It moves fast from one topic to another, with stories, jokes and bits of history interspersed among lots and lots of food talk, and always — always — no matter how stuffed you may be, it gets you fantasizing about what you’ll be eating next.

Reading it almost feels like being on a particularly good culinary walking tour — without the exercise, heat or humidity. Instead, there are scads of evocative images — many archival, some recent; some of food; some of people or places. And there are lots and lots of great voices — from historians, food authorities, restaurant owners and comedians including the late, great Joan Rivers, who wrote the book’s introduction.

There are classic recipes from venerable eateries like 2nd Avenue Deli (we’ve reprinted its matzo-ball recipe here) and Sammy’s Roumanian, along with many classics culled from home cooks and Jewish food authorities like Arthur Schwartz, whose borscht and stuffed cabbage recipes are featured. There’s also a recipe for “Renee Silver’s Famous Kasha Varnishkes (The Kind That Makes Joan Rivers Plotz!).” Yes, that’s the name of the recipe.

And speaking of Rivers, I particularly liked the moment in her intro when she reminisced about Sunday gatherings at the snooty home of a rich Park Avenue aunt. Apparently her family lived in Brooklyn, and en route to the weekly party they would get off the Manhattan Bridge and “stop at Yonah Schimmel’s on Houston Street for a knish,” Rivers wrote, “because even though my aunt threw these extraordinary soirees, we knew the kind of finger foods she’d be serving didn’t compare to a great knish. We’d show up on Park Avenue, smelling of onions and potatoes and hand her white-gloved doorman a greasy brown bag full of napkins and wrappings and say, ‘Here, hide the evidence!’”

While that’s not the funniest thing Rivers had to say, it seems somehow representative of so many Jewish family traditions that revolve around food, and it captures the rapturous celebration of traditional Ashkenazi Jewish dishes that is “Eating Delancy.”