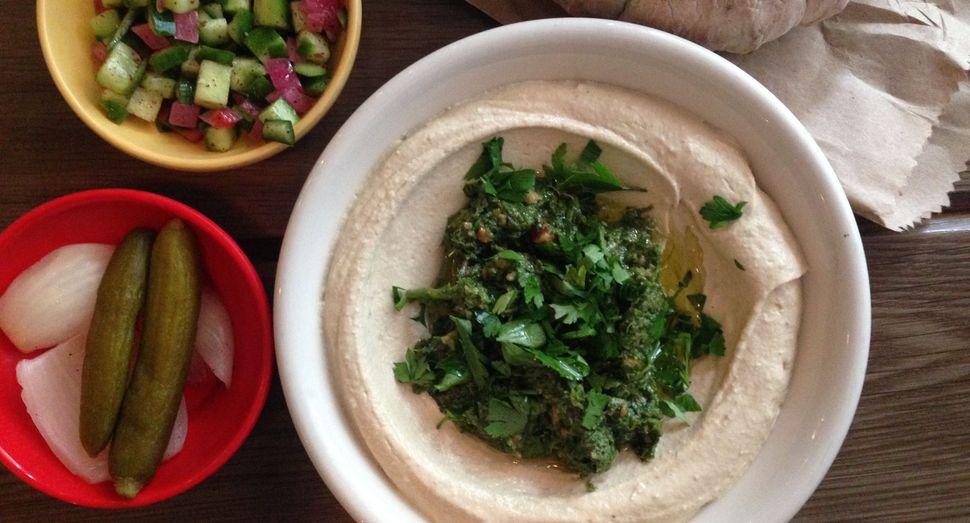 Hummus topped with kale pesto is part of a splendidly satisfying Israeli-style breakfast at Dizengoff, one of Michael Solomonov’s five popular Philadelphia eateries.

Next year, he will star as the host of a PBS film called The Search for Israeli Cuisine. And along with his business partner, Steven Cook, he has a new cookbook coming out this week.

Last week I had a cookbook event in Philadelphia, so Yoshie and I decided to take Max, book an Airbnb and make a mini vacation out of it. Considering how close we live to Philly, I know remarkably little about the City of Brotherly Love. What I do know is that I would be foolish to spend time there and not eat in one of Solomonov’s restaurants. With limited time on our itinerary, the question was, which one?

Traveling with a toddler kind of killed our chances for a late-night dinner at Zahav or Solomonov’s Jewish Diaspora cuisine-inspired restaurant, Abe Fisher. But breakfast we could handle. Remarkably, his Israeli-style hummusiya, Dizengoff, which opened last year, was located two blocks from the apartment we were renting in Rittenhouse Square. (Okay, I might have booked the place with that detail in mind.)

We arrived at 10:30 a.m., shortly after it opened. Granted, when your wakeup time is closer to 6, 10:30 feels like mid-afternoon, but we decided to think of our meal as a second breakfast. Like the hole-in-the-wall hummus joints found in Israel, the menu at Dizengoff is spare: a few hummus varieties (we chose a plate of the basic tahini hummus, and a second topped with kale pesto), and a few salads served with freshly baked pita. But oh, that hummus. Custard-smooth, ethereally light and surprisingly nuanced in flavor, it beats even the best bowl of oatmeal. Between the three of us, we swiped up every drop of that chickpea spread, leaving bare plates behind.

After finishing at Dizengoff we walked across the street to another Solomonov establishment, Federal Doughnuts, where Yoshie and I split a dark chocolate glazed. (Max got an apple in his stroller, and fortunately didn’t notice us licking frosting off our fingers. First breakfast, second breakfast, who cares? Philly, consider us smitten.