YidLife Crisis Takes a Bite Out of the Big Apple 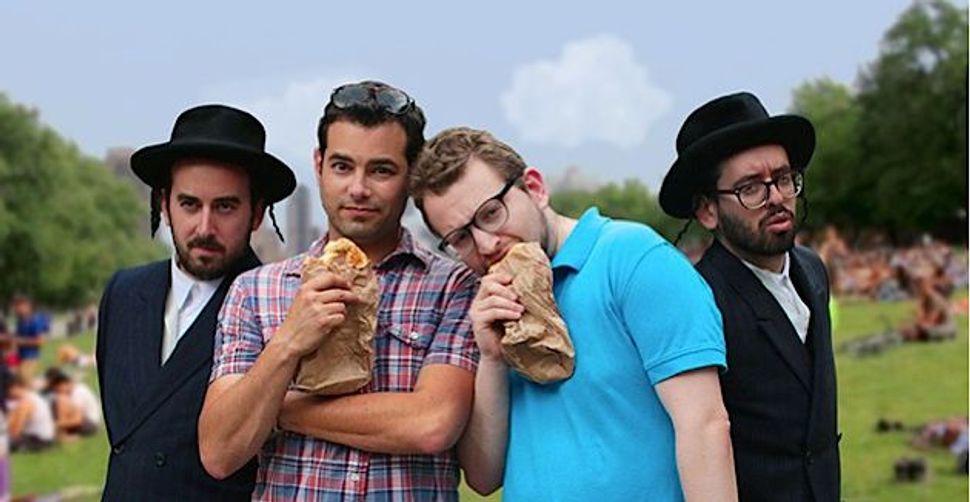 YidLife Crisis’ Jamie Elman (second from left) and Eli Batalion (second from right), flanked by a couple of unidentified hassidim.

food festival, I had a lightening-fast confab with Eli Batalion and Jamie Elman, the duo behind the Yiddish-language sitcom YidLife Crisis. They were rushing around in the heat, shadowed by a cameraman, talking fast and eating faster, while asking a lot of rapid-fire questions of food vendors, musicians and members of the Workmen’s Circle, which ran the event.

Watch the Canadian comedy duo gorge its way through the Taste of Jewish Culture food festival.

The irreverent pair had assigned itself the formidable task of sampling every delicious delicacy at the fair. “We don’t know if we’re going to survive,” Batalion says at the start of the resulting video, “but we have been fasting for the last 24 hours, so we’re ready for the challenge.”

Scenes From a Foodie Street Fair

They begin at the Mile End Deli booth, musing that bagels are the one thing Montreal does better than New York. “We call this a freschen! It’s a freshy,” says Elman, after biting into his half.

They stop to talk with Workmen’s Circle Executive Director Ann Toback, who tells them, “This is us in a New York City block. We looked at restaurants and vendors who are taking the concept of Jewish cuisine into the 21st century and making it spectacular.”

Moving on, they meet a “superfan” who wants to buy them something to eat. “We’ll eat anything!” they assure the kid, who treats them to a bialy. (“It’s like a Jewish English muffin,” explains Dave Zablocki of Kossar’s Bialys.)

After listening to some klezmer, they fall hard for Breads Bakery rugelach, then visit Judy’s Knishes and kvell over her kasha- and potato-filled delights. At one point they jump into the Taim falafel truck, and later chat with a guy holding a huge “Jesus Saves” sign. “Hey man,” says Elman, “if Jesus accepts bagels and lox, then I accept Jesus.” They share some food with him before moving on.

When Batalion announces from the stage that he’s never had an egg cream, they’re off to the Brooklyn Selzer Boys to remedy the situation.

As the afternoon wanes, their appetites and energy finally do as well, and in the last scene of the video, they’re seen lying on their backs on Avenue of the Americas, rubbing their bellies and mopping their brows, filled up with food and the satisfaction of a summer day deliciously spent.

YidLife Crisis Takes a Bite Out of the Big Apple