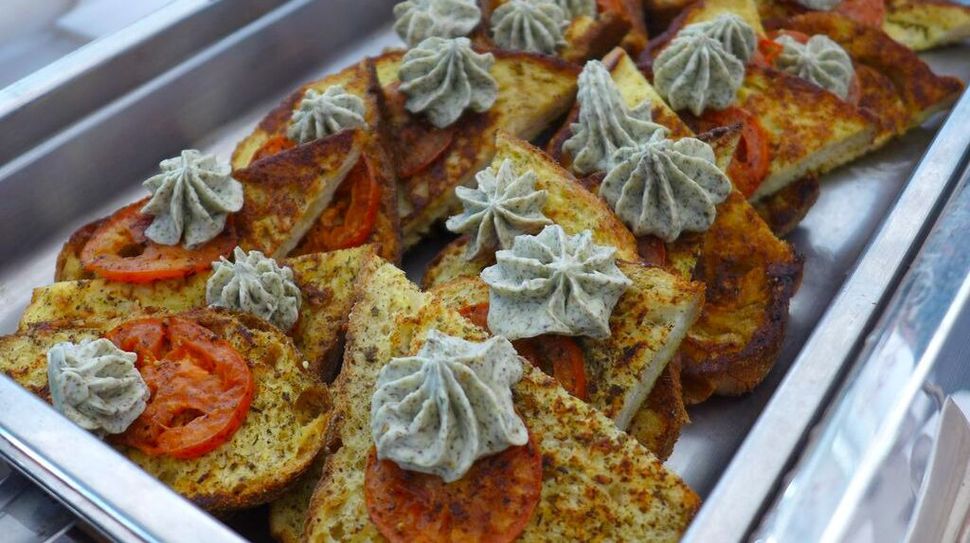 A few Sundays ago, I cooked brunch in front of 60 strangers — on stage.

I was at the Skirball Cultural Center, the gorgeous Jewish cultural mega-ship based in Los Angeles, doing an event in support of my new book, “Modern Jewish Cooking.” Preparing food in front of a live audience has become one of the unexpected perks of cookbook writing. I tend to shy away form the camera, but I love the energy of sharing a real-time cooking experience with an audience. 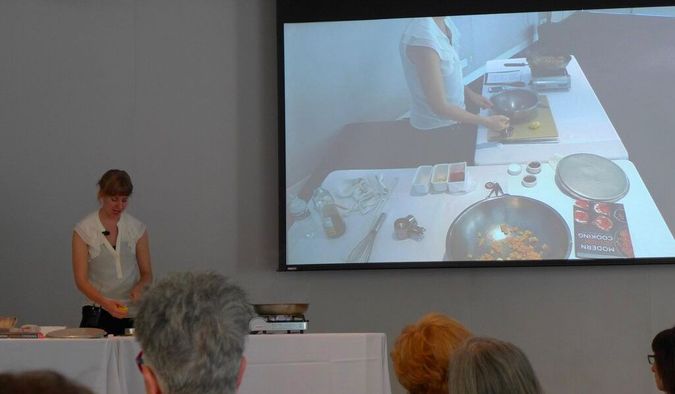 The author on stage at the Skirball Cultural Center.

This particular event, called Brunch 2.0, was based on the same premise as my breakfast column for the Forward: that bagels are only the beginning of what a Jewishly inspired morning meal can offer.

Instead of falling back on the smoked fish platter standby, the menu was modeled after my own dream morning meal — a mix of sweet and savory, fresh and fried, eggs and carbs. Skirball’s executive chef, Sean Sheridan, and his team prepared several recipes from the cookbook: individual shakshukas baked in ramekins, French toast with za’atar butter and seared tomatoes, smoked salmon hash with an herbed vinaigrette, two different salads (one a mix of shredded carrots, dates and mint, and another with arugula and grilled pears), sour cream coffee cake with pecan streusel and chocolate dipped almond horns.

If it sounds like an ambitious number of dishes, it was. During our early phone conversations as we discussed which recipes from the cookbook to feature, I wondered aloud if seven dishes might be too much to do well. I needn’t have worried. While I was prepping ingredients for the demo, chef Sean rolled into the room on a standing electric scooter like some kind of chef’s whites-donning superhero cyborg. Turns out, he is as skilled at gliding on a segue as he is at turning out knockout meals. It can be intimidating to taste someone else’s interpretations of your recipes, but in this case it was a pleasure. 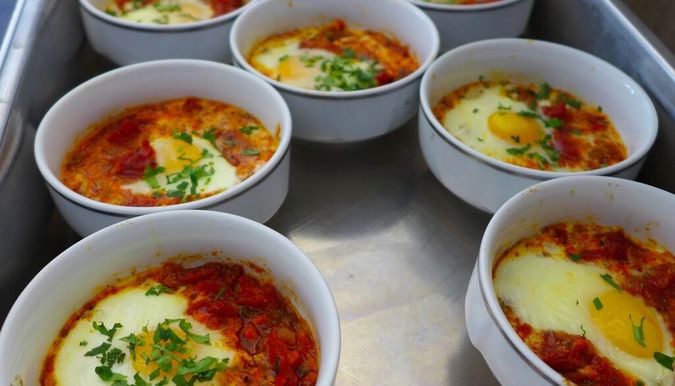 Soon guests started streaming in, including (thank goodness) a couple of old friends mixed into the crowd. They poured coffee, served themselves at the buffet and sat down. I, meanwhile, switched on my clip-on pocket mic and started chopping. About 45 minutes later, I had made the hash and vinaigrette, shared stories about my book and watched as 5 dozen people enjoyed their meal. The room was filled with California sunlight and the lingering scent of coffee.