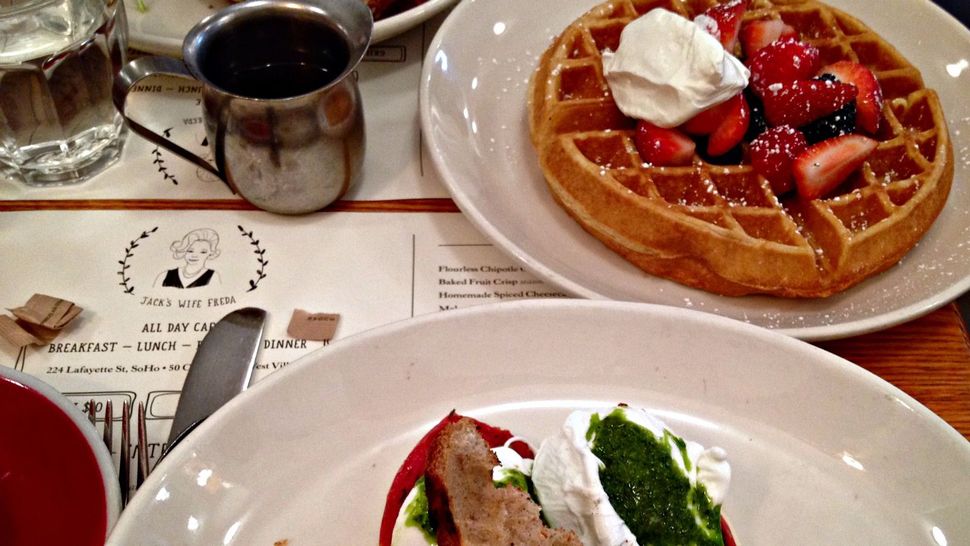 Within a few minutes of opening on a recent weekday morning, the tables at , an eclectic bistro in New York City, were nearly filled. Even for Soho, the crowd seemed impossibly chic for 8:30 a.m. — impeccably dressed downtown teenagers, entrepreneurs in bespoke bobo and even the occasional fur coat (yes real, and almost certainly not vintage).

And yet the vibe in the airy, sunlit space was remarkably welcoming. And genuine. And quite delicious. Named after co-owner Dean Jankelowitz’s grandparents, the restaurant features a mix of dishes that reflect Jankelowitz’s South African-Jewish heritage (matzo ball soup, malva pudding) and his wife Maya’s Israeli background (green shakshuka, grilled haloumi cheese), along with a bottomless cup of coffee that make eating at Jack’s Wife Freda feel as homey as an all-American diner.

My breakfast companion that morning, Noah Arenstein, shares a bit of this high brow/low brow charm. With his clear plastic glasses and a thin layer of scruff covering his cheeks, he looks just like that unassuming guy who lived in your dorm freshman year. But the 31-year old lawyer and writer turned budding restaurateur might just turn out to be the next Danny Meyer. 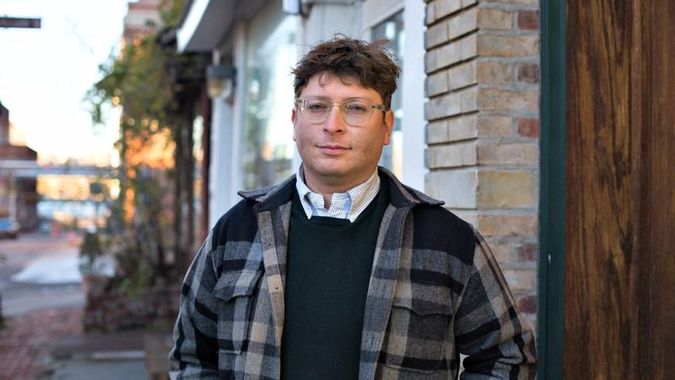 Image by Courtesy of Noah Arenstein

Is Noah Arenstein (above) the next Danny Meyer?

Over the last half decade, thanks to a mix of legal and kitchen skills (he spent his free time during law school throwing epic dinner parties), a knack for networking and a bona fide excitement about good eating, Arenstein has begun to make a name for himself in the food world.

By day he advises restaurants and food business through his private practice. Meanwhile, he is a partner at the barbecue joint Arrogant Swine, and also the just opened regional Mexican restaurant El Atoradero Brooklyn. He also co-founded the online guide, Real Cheap Eats. “So I’m working 17 hour days now,” he recently quipped to his Twitter feed.

And then there are his Jewish food initiatives. Arenstein founded Scharf & Zoyer, a global Jewish sandwich stand that debuted at the popular Brooklyn food market, Smorgasburg in 2013. He also partnered with The Workmen’s Circle to curate large-scale Jewish food street fairs featuring some of the city’s most beloved nouveau Jewish chefs.

Over our breakfast at Jack’s Wife Freda — a rosewater waffle topped with thick yogurt, berries and honey syrup, and poached eggs served over slices of grilled tomato and salty haloumi — Arenstein shared stories about growing up in Cincinnati in a food-loving family. His great grandfather was a fish monger, and his grandpa was a Jewish epicure, long before his time. According to Arenstein, he loved nothing more than slicing off slivers from a new salami and nibbling with revelry. And when preserving pickles, Arenstein said, “My grandfather would wait until he found the perfect kirby cucumbers. He had relationships with all of the produce sellers.”

He also talked about his work with Scharf & Zoyer (which means spicy and sour in Yiddish). At Smorgasburg, he served Jewish sandwiches with tongue-in-cheek twists: a tuna melt topped with potato chips on an everything bagel-spiced croissant, and the delightfully wacky Kugel Double Down, a sandwich named after the KFC creation, which stuffed farmer’s cheese, apricot preserves, and fried shallots in between two slices of fried kugel.

One thing is clear when talking to Arenstein: He is brimming with ideas for new projects and collaborations. Over time he plans to shift most of his energy towards creating restaurants. “It seems to be organically moving in that direction anyway,” he said. Among them, he hopes to launch a new Jewishly-inspired spot down the line.

Meanwhile, Arenstein took a last bite of waffle, checked his watch and apologized. He had a client meeting and a restaurant launch later that night. The breakfast crowd at Jack’s Wife Freda was still swinging, but his 17-hour work day was just beginning.