Breakfast in the Blizzard 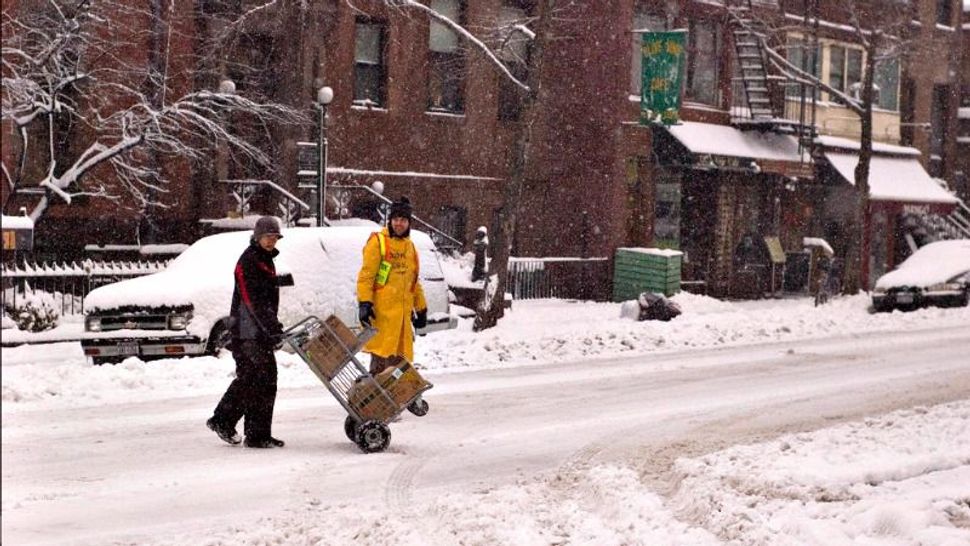 A worker at the Park Slope Food Coop helps a customer cross the snowy street safely with her groceries.

While standing in a 20-person line at my food coop last Friday, it occurred to me: When a major snowstorm threatens, everyone becomes a Jewish mother.

My cart was packed with the fixings for chicken soup making, cookie baking and general fressing. Looking around me, I saw that everyone else’s looked similarly stuffed. We joked amongst ourselves that we were being silly — too easily swayed by the media’s insistence on an approaching “snowpocalypse.” But clearly we did not feel silly enough to take any chances. As Jewish mothers intuitively know, it is best to be over-prepared.

What transpired was nothing short of beautiful. As usual when a communal event hits New York, the city’s residents were on their most civic-minded behavior. Everyone had a ready-made subject to talk about while riding the elevator or waiting for the bus. People brought blankets and lentil soup for their doormen. They made plans to meet with friends for snow-day romps — weather permitting, of course. As the first flakes began to fall early Friday evening, shortly after Shabbat candle lighting, a dreamy quiet blanketed the city.

The day of the storm, we hunkered by our window watching the wind whip the snowflakes into ever-growing drifts. We began the morning with a pot of oatmeal topped with dried cherries and maple syrup. It was a fantastic antidote to the knowledge that, with a toddler in the house and a gusting blizzard outside, we were likely not going anywhere that day.

To stave off the stir crazies for as long as possible, we listened to Gershwin and went down to our apartment’s lobby to feel close to the storm, if not in it. Our building’s super taught Max to kick a ball. Later the neighbors came over to borrow a baking sheet, then brought back a plate of chocolate Snickerdoodles.

By day two, all the snow had dropped and the sky was bright and clear. Yoshie went out for bagels and reported that not only had the world not ended, it was looking pretty glorious. Texts were sent, and plans confirmed for sledding and snowballing. Over toasted sesames with cream cheese, a pile of scrambled eggs and a steaming pot of coffee, we toasted to the snow day.

Leah Koenig is the author of She is a contributing editor at the Forward.

Breakfast in the Blizzard