Matzo, Elemental Bread of the Spirit 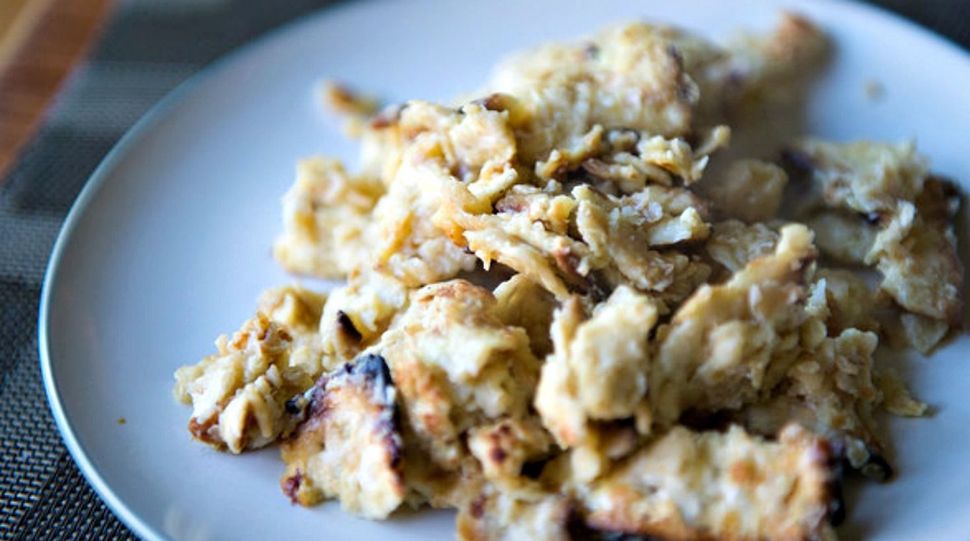 What’s so special about matzo? After all, it’s nothing more than flour and water baked to a cracker-like thinness. Not especially digestible either, especially after eating it as the default bread for the entire week of Passover when chametz (leavened or risen bread and leavened products) are forbidden.

The Hebrew word “matzo” (plural, matzot) first appears in the Book of Exodus (12:8) in God’s instructions to Moses and Aaron for instituting Passover among the Israelites, later Jews, on the eve of their flight from slavery in Egypt. This is what they must do: They are to eat unleavened bread and bitter herbs with a slaughtered lamb. From the minute details concerning the lamb — it should be without blemish, a yearling male, either from sheep or goats, it must be entirely eaten in one night and roasted entire — the sacrifice would appear to be central to the meal with matzo and maror (bitter herbs) as mere side dishes. But as the text proceeds, we get a different slant about the matzo because God’s instructions continue to hit the theme of unleavened vs. leavened. So important is the idea that “for whoever eats leavened bread from the first day to the seventh day, that person shall be cut off from Israel … You shall eat nothing leavened; in all your settlements you shall eat unleavened bread (12:19-20).” This is pretty strong stuff, overshadowing the paschal lamb. In fact the Bible calls this occasion, among other names, Hag HaMatzot (Feast of Unleavened Bread) “for on this very day I brought your ranks out of the land of Egypt; you shall observe this day throughout the ages as an institution for all time (12:17).”

There seems to be a close connection between the institution of Passover and eating only unleavened bread.

If we look back in time before the events described in Exodus, folklorists tell us that eating unleavened bread is not unique to Passover, for it is one of the key elements in a pagan lambing festival among semi-nomadic shepherds in the spring of the year. In a celebration also called Feast of Unleavened Bread that accords in every detail with the one described in the Bible, participants eat a meal in haste of lamb or goat with unleavened bread and bitter herbs. The purpose of the hasty meal, at which no scrap is left to ferment and where only quickly prepared unfermented bread must be consumed, was to ensure ritual purity so that the placated gods of nature would bring good luck (fertility) to the shepherd’s flock. In ancient folklore, fermentation was associated with impurity, hence contamination.

In the Exodus story these rituals take on an entirely new meaning, now associated with God’s spiritual and physical redemption of the Israelites from the pagan culture of Egypt. Their freedom, we begin to learn, comes with obligations, the first one being to remember the Passover (Pesach), as it will be known, because God passed over their houses marked with a brush of hyssop stems dipped in the lamb’s blood, when He struck the land of Egypt with the Tenth Plague (Exodus 12:12-13). Remembering the Passover is central to the Israelites’ new life. The mandated recitation of mikra bikkurim (declaration of the offering of first fruits at Shavuot based on Deuteronomy 26:5-10) drives home the same point, which emphasizes the Oneness of God Who brought the people out of Egypt, the same God Who gives the fruit growing in the Promised Land. The pagan bonding ceremony has been transformed into a crucial element in Israel’s declaration of monotheism.

In the Passover setting, hametz, leavened bread, came to be associated with the peoples’ past life, hence, it was impure, contaminated. The simple, unadorned flat bread (roughly circular, made from barley, the flour of the poor) baked on the run in the Israelites’ rush to escape their pursuers, now symbolized freedom from the old ways. Everything from this day forward would be different. In this new way of thinking, the community instituted the communal meal, not to bring them luck in the lambing season, but to recall, forever, their thrilling redemption by God.

In its new role, a hard cracker-like bread was raised by Biblical injunction to the very pinnacle of spiritual nourishment. Stripped of all pretension, embodied by the yeast that puffs it up, it is this rough, most humble, elemental bread that God wants us to eat on Passover in order that we may recall, through every generation, that He brought us out of bondage, from darkness to light, from slavery to freedom on the 14th of the month of Nissan (just before sundown, erev Pesach). Looked at in this way, matzo is as much a state of mind as it is a food. Not only is it not difficult to refrain from hametz, it is a privilege to eat mazot, the bread of freedom, throughout the days of the holiday. The leader of the Passover Seder launches the service by holding aloft a piece of matzo, proclaiming, “This is the bread of affliction which our forbears ate in the land of Egypt. Let all who are hungry enter and eat. Let all who are needy come to our Passover feast.” Now we are ready.

Jo Ann Gardner is a writer living in the Adirondacks. Her latest book is “Seeds of Transcendence: Understanding the Hebrew Bible Through Plants” (Decalogue Books, 2014), from which this excerpt has been adapted. Her website is www.joanngardnerbooks.com

Matzo, Elemental Bread of the Spirit