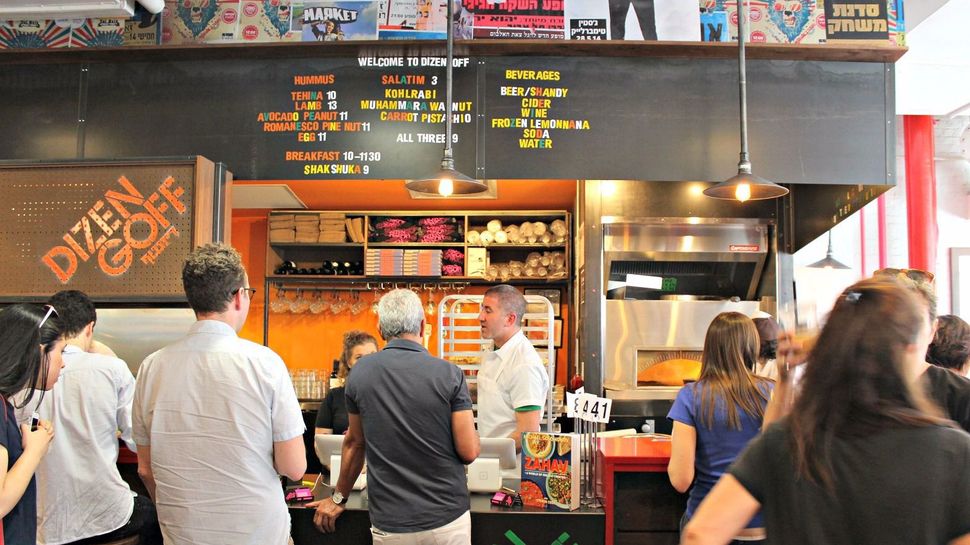 Michael Solomonov behind the counter of the new Dizengoff in New York’s Chelsea Market. Image by Courtesy of CookNSolo

It’s rare for New Yorkers to have restaurant envy. Isn’t everything we could possibly want to eat right here?

But ever since I became aware of what Chef Michael Solomonov is cooking up in Philadelphia — at Zahav, Dizengoff, Percy Street Barbecue, Abe Fisher and Federal Donuts — I’ve been reckoning with an ugly tinge of jealousy, while trying to figure out which weekends I can spend chowing my way through the City of Brotherly Love.

Today — huzzah! — all I have to do is jump on the A train. Because this morning, Solomonov’s Israeli-style hummusiya, Dizengoff, opened in Chelsea Market.

Solomonov and his business partner Steve Cook may be even more excited than I am.

“The feeling I get when I step onto NYC soil is incredible,” Solomonov said, “not only because of the energy and ambition and drive this city emanates but because NYC presents a personal challenge that I’ve always wanted to accept. My heart is in Philly, yes! But when I walk into Chelsea Market and know that it is my duty to serve the food-savvy folks of NYC the absolute best I can possibly serve and they come back for more? That feels magical.”

Philly’s Dizengoff was created as the casual spinoff of Zahav. Its new Manhattan offshoot is larger and boasts a few additions to the menu including shakshuka, served every day. (It’s only available on weekends in Philadelphia.) Like the original, it’s not kosher but “kosher-style.” The chef, transplanted from Zahav, is Emily Seaman.

Hummus and salatim (an array of small salads and dips) are available as platters or to go. Pita is made on site in a wood-burning oven. Draft beer and Israeli wines are also available.

“I think ​this city has always had the desire for Israeli flavors,” Cook said. “The love and support for ethnic cuisines showcased from around the world is proof that New York is one of the most accepting, open minded, curious towns on the planet. This place has a life to it that is fueled by the need to try — try a new dish; attempt a new flavor combination; taste a different culture. There are wonderful restaurants that highlight Israeli flavors… I do believe that Israeli food has started to infiltrate those curious NYC minds and the desire for those simple, clean, healthy mediterranean flavors have blossomed to the fullest extent.”

I know what I’m having for dinner tonight.