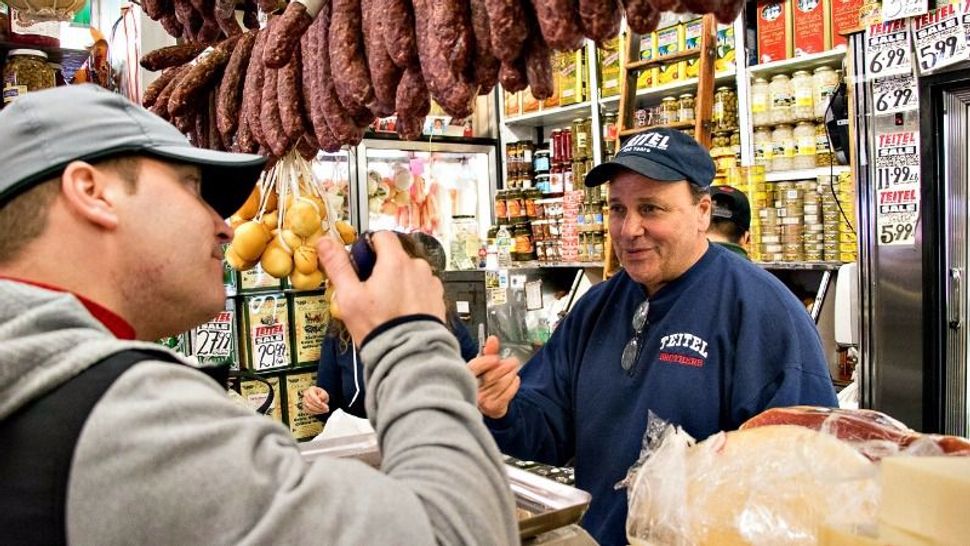 Michael Teitel (right) offers an osso buco recipe to Giancinto (left), an Italian restaurant owner and executive chef, who comes to the store twice a week for grocery shopping and inspirations. Image by Timmy Hung-Ming Shen 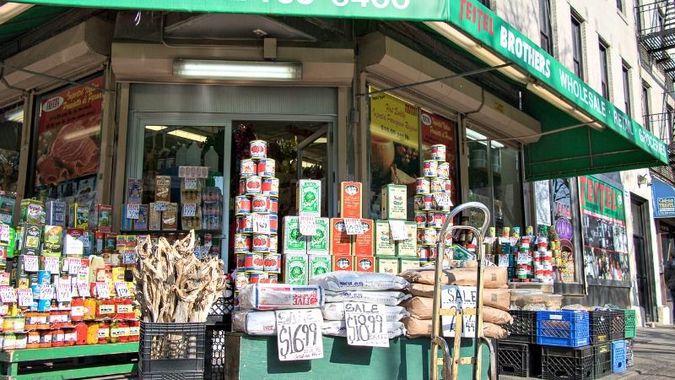 The Teitels, a Jewish family originally from Austria, have sold Italian groceries on Arthur Avenue since 1915. Image by Timmy Hung-Ming Shen

One of the most popular and enduring shops in the Bronx’s Little Italy is a third-generation family business run by a Jewish immigrant family — not from Italy, but from Austria. Teitel Brothers Imports, opened in 1915, does not sell kosher goods, but rather all kinds of Italian items from salami and balsamic vinegar to olive oil.

Why didn’t the owner name the store something more suggestive of what it sells? “Their name wasn’t Almiro or something. It was Teitel,” said Gilbert Teitel, 77, whose father and uncle started the business.

The corner grocery store on Arthur Avenue and 186th Street, with cans of peeled tomatoes and olive oil piled up at the entrance, has beckoned customers for over 100 years. The Teitel family emigrated from Austria in the early 1900s, and Gilbert Teitel’s father and uncle first worked as tailors in Manhattan, while his mother helped out in his grandparent’s grocery store in Brooklyn. At the encouragement of their cousins, who had opened similar Italian stores in Brooklyn and Queens, the Teitels started the business in the Bronx, catering to Italians.

“Everybody loved Italian food,” said Teitel. “It was anything they felt that they could make a living at. And I assume that it was the easiest choice of a business at that time.”

The Teitels were not the only Jewish family to open an Italian store in this neighborhood. “There were quite a few Italian grocery stores owned by Italians, and there were a few Jewish families, including mine, that went into the grocery business,” said Gilbert.

Competition at that time was fierce, particularly in the 1930s. “That was during the Depression. Olive oil cost $1.99 a gallon,” said Gilbert. They earned little profit. They also had delivery service — by a horse and wagon, which later became their brand logo and has been printed on the olive oil package since the 1970s.

Today Teitel and his three grown sons, Jean, Michael and Eddie, maintain the business together. Jean, 58, manages the warehouse just a block away. Michael, 57, is a former chef who used to run an Italian restaurant in Suffern, New York. He sold it in 2005 and returned to the family business. 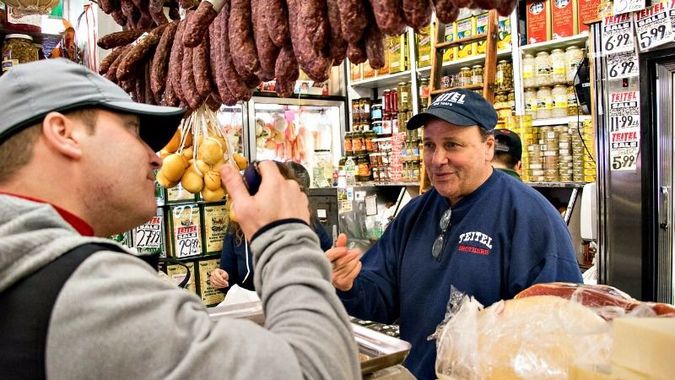 Michael Teitel (right) offers an osso buco recipe to Giancinto (left), an Italian restaurant owner and executive chef, who comes to the store twice a week for grocery shopping and inspirations. Image by Timmy Hung-Ming Shen

Now Michael stands with Eddie, both in white aprons behind the counter, slicing ham and cheese under a canopy of salamis that hang above their heads. They hand out samples for the customers to taste.

From time to time, Michael climbs up the 100-year-old wooden ladder to reach the olive oil on the top of the shelf behind him. He points to a can of olive oil beside him labeled EDDA, explaining that it was named after brother Eddie when he was born in 1971. “And this one,” he said, pointing to a can labeled Don Luigi, “was named after my uncle.” 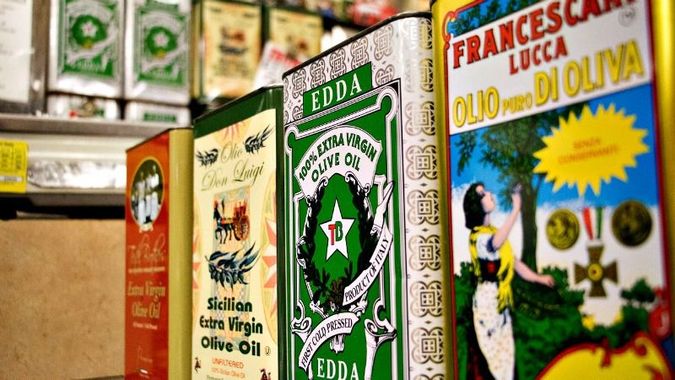 Cans of olive oil, named for members of the Teitel family. Image by Timmy Hung-Ming Shen

Even though the third generation has taken over the business, the elder Teitel still comes into the store and hangs out with the regulars, who return to shop even though they may have left the neighborhood.

In the late 1800s, the construction of the Bronx Zoo and Jerome Park Reservoir brought in a wave of Italian artisans and laborers to Belmont, according to the the 2011 community project of City University of New York. Italians dominated the neighborhood for most of the 20th century, but in the late 1960s and in recent years they have been joined by Albanians and Latin Americans.

Up to the turn of the millennium, more than half of all residents in Belmont were Italians. Today, according to New York City Department of City Planning, Hispanics make up about 57% of the population of the neighborhood. Roughly 25% of the population is White and 12% African American, while the remaining 6% is Asian or of another ethnic group.

As the neighborhood changed, Gilbert Teitel hired his staff accordingly. “In the 1970s, we hired an Albanian young man as an interpreter,” he said. Today most of his employees are Latino.

“The neighborhood has changed a lot, but the stores have never changed,” said Mark Digiacomo, 59, who grew up in the neighborhood with his Italian immigrant grandmother and left in the 1960s. “I bought a house somewhere else, but I’ve constantly shopped here for about 40 years.” He now lives in Carmel, New York, and has to travel about 60 miles from his house to the store, which he does every two months. “The cheese here is the best,” he said.

Teitel Brothers also beckons to professional chefs and restaurant owners. Giorgio Giacinto, a 38-year-old executive chef who runs the Italian restaurant Da Giorgio in New Rochelle, comes to Belmont twice a week to shop. “I pick up fish and meat next door, and some cheese here,” he said.

Although the store seems to primarily follow in Italian footsteps, the Teitels still keep some of their Jewish traditions: They close on Rosh Hashanah and Yom Kippur.

“My parents were raised in a kosher tradition,” said Gilbert Teitel. He and his brother used to go to temple for the high holy days, but they eat non-kosher foods. “I eat predominantly Italian today,” he said.

As the third generation takes on the responsibility of running the store, it brings in new ideas. When Gilbert Teitel’s older brothers were alive, he actually encouraged the younger generation to implement its ideas, like taking down a wall in the store, without notifying the uncles. “My brothers were upset,” he said. “Well, we have different ideas from the old school, and they’re from the modern school of change.”

The transition from one generation to the next is continuous. “And now they’re doing it to me,” said Teitel raising his eyebrows. The most recent change was the new products his sons brought in — cookies and candies from Croatia.

“This isn’t a candy store!” he raised his voice. “I just blew off steam and that was it.” After all, it had become a hot item by the end of the day.

Today the store has seen its fifth generation. Michael has three children and a five-year-old granddaughter; Eddie has three grade-school kids. Except for the five-year-old, they all have helped out in the store.

However, Teitel does not want the younger generations to step up and take over the family business. “We work long hours, six days a week,” he said with a sigh. “There are other jobs they can do.”

Timmy Hung-Ming Shen is a recent graduate of Columbia University Graduate School of Journalism. Contact him at [email protected] or on Twitter, @timmyshen0716