Jewish Cookbooks & The Stories They Tell 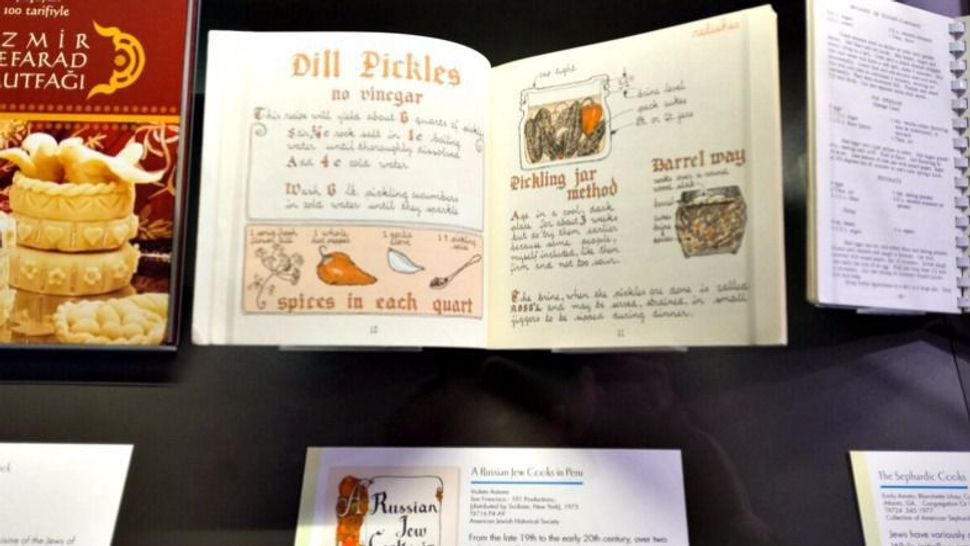 During a dinner conversation a year or two ago, my father briefly alluded to a “gross” lard-like product his mother used for frying. I had forgotten the name of it until a recent walk-through of “Nourishing Tradition: Jewish Cookbooks & The Stories They Tell” at the Center for Jewish History, where a pamphlet published by Proctor & Gamble triggered the memory.

The show displays only a handful of the 600 cookbooks the center’s partners own, a slight disappointment, but also enough of a taste to grasp the concepts. The exhibit doesn’t follow a chronological order; rather, the cookbooks have been grouped together by section. The Proctor & Gamble pamphlet, reminiscent of a blue-book exam, is the first object in the first section, called Reaching New Consumers. Written across the top is one word: Crisco. My eyes lingered on the page, and I imagined my grandmother at the stove in the 1960s, sizzling up a can of beans as the grease my dad had spoken of popped in the pan.

“Nourishing Tradition” aims to stir up these kinds of nostalgic memories about family stories, even ones not necessarily witnessed firsthand, but passed down through generations. It seems obvious that old cookbooks should later become family relics, and the exhibit also suggests that they serve as a connector within the Jewish community.

“I think Jewish recipes not only tell the stories of the migrations in the Diaspora, but for so many foods, there’s this symbolic meaning and also a very, very strong element of memory and emotional attachment, a very resonant connection not only to your family and your people, but all your various lost homelands,” said Jayne Cohen, who has written several Jewish cookbooks, such as “Jewish Holiday Cooking,” and attended the opening of the exhibit. 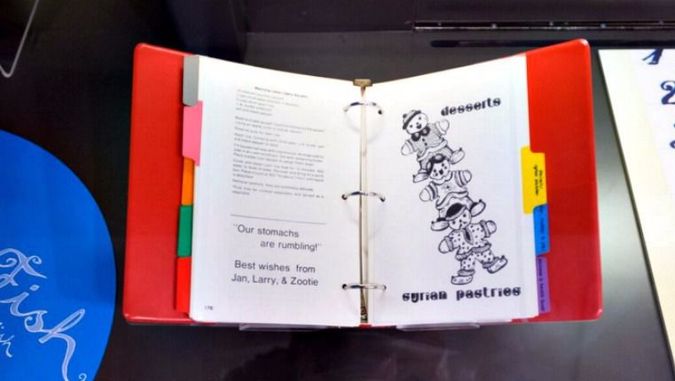 The Crisco cookbook, an item that people often ask about, illustrates how an immigrant population soaked up Jewish recipes using an American product, and how an American company capitalized on its coincidentally kosher oil to lure a growing consumer base. The book is a calculated campaign for assimilation. Published in both Yiddish and English, it was meant to serve as a bridge between old world mothers and Americanized daughters.

Similarly, “A Russian Jew Cooks in Peru” from 1973 also represents the ways Jews tried to adapt through cookery. Aside from the cute rhyming title, the book, handwritten in loopy cursive by its author, Violeta Autumn, attempts to recreate Eastern-European recipes in a South American country that lacked the ingredients inherent to Jewish food of that region. For example, Autumn substitutes chicken for fish in her gefilte fish recipe.

It seems most people who study Jewish cookbooks can speak of one they hold dear, one that prompts stories of their mothers — like “The Settlement Cookbook.”

Melanie Meyers, the curator of the Center for Jewish History exhibit nixed that book from the lineup because “everybody knows it.” She hangs onto a copy her mother gifted her in 1995 when she moved into her New York City apartment.

Bonnie Slotnick, who owns a cookbook shop called Bonnie Slotnick Cookbooks on East 2nd Street, flipped through her mother’s edition as a little girl, fascinated by the roasted pork recipes alongside Yiddish meals and several varieties of matzo dumplings. Her parents immigrated from Poland and Russia, and her father mostly owned collegiate textbooks. “The Settlement Cookbook” was an exotic jewel among her father’s academia and she turned the pages not quite knowing what odd recipe she might find. She still particularly likes the “flour-ball” recipe which calls for baking a balled mixture of water and flour until the outside hardens, then cracking the shell, grating the innards and consuming it to cure diarrhea.

Cohen said her mother owned a later edition of the book — there have been constant updates since its original 1901 publication — and claimed earlier versions are hard to come by.

Mrs. Simon Kader, alongside German Jewish immigrants from the Milwaukee Settlement House and “experienced housewives,” compiled “The Settlement Cookbook,” which was dubbed as a guide to domestic life and “a way to a man’s heart.” It outlines proper attire for maids, how to care for silver, the best way to clean broken glass, and gives sample menus for Passover and Christmas supper. In the 1970s, the tagline “a way to a man’s heart” was, unsurprisingly, removed. Versions from the 80s incorporate microwave cooking.

I admittedly took some issue with how these cookbooks portray the role of women in America, and with the lack of male voices in the discussion.

“In Jewish-style cookery, more so than in most other cuisines, recipes have been handed down for countless generations from mother to daughter,” reads the introduction to “The Art of Jewish Cooking” by Jennie Grossinger from 1995.

“Deal Delights,” a Sephardic cookbook compiled from such gatherings as women’s associations and PTA sales in 1980 Deal, New Jersey, also annoyed me, though I recognized that the act of writing and publishing probably gave these women a voice. 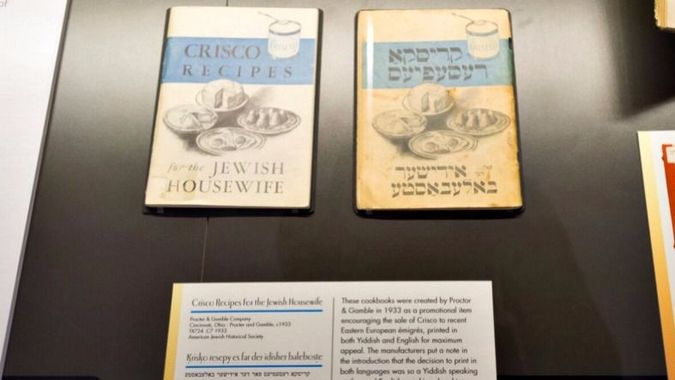 Overall, the exhibit exudes a motherly, matriarchal feel given that only one man authors a book, and it’s with his wife – though of course the Proctor & Gamble cookbook feels masculine. However, many of the taglines and undertones of the books undercut female power by instructing proper behavior and duties expected of a young woman living throughout the 20th century, even those published during second wave feminism. These guidebooks were written for and targeted to women to be passed down to their daughters, which goes to show how society connects women and the kitchen. Even when I called my father later to confirm the Crisco story, he couldn’t recall what his mother made with it or how she used it, as if he was never a part of the process. Of course, this is also indicative of the 1960s suburban era he grew up in, where he hadn’t yet experienced fluid gender roles.

I posed a question to the five partner curators after a guided tour about what the books say of the broader role of Jewish women in the 20th century. They stood in a circle and pow-wowed. I couldn’t help think of a meeting between the five families. They agreed that Victorian ideals shaped these cookbooks, specifically noting that a woman’s job then was to be wife and mother.

My encounter with a male voice during this research came as a nice surprise. As a book scout years ago, Slotnick found a fragile, brown-stained letter tucked inside a 1953 edition of “The Joy of Cooking.” She now keeps it in a plastic sheath behind the counter at her shop and I went to inspect it.

The letter begins, “Dear Florence,” written in all capital letters. It is only dated as “Wednesday.” It goes on for a page to tenderly relay a recipe in prose-like form for gefilte fish and brown potatoes. The writer uses two Rs in “very” and sometimes spells “cook” like “coock,” suggesting that English likely was not the first language. I found it touching.

“Let it cook for about 1 hour than taste. If some more sal ant papper is needed, the whole thing should coock altogether for 2 or 2 ½ hours. You let me know if comes out good,” the author writes about the gefilte fish.

The writing overflows onto the back page and the content suddenly switches to a personal update.

“I think that when I talk to you Thursday night I may tell you that I made the choice which most likely will be Mrs. Katz and if so, I shall marry either April or in the middle of May. I think that the unveiling will take place either March 25 or April 1st. That’s all for now. I was home all day because of the cold weather.”

I looked at the signature and was taken aback.

It is signed “Father.”

Jewish Cookbooks & The Stories They Tell