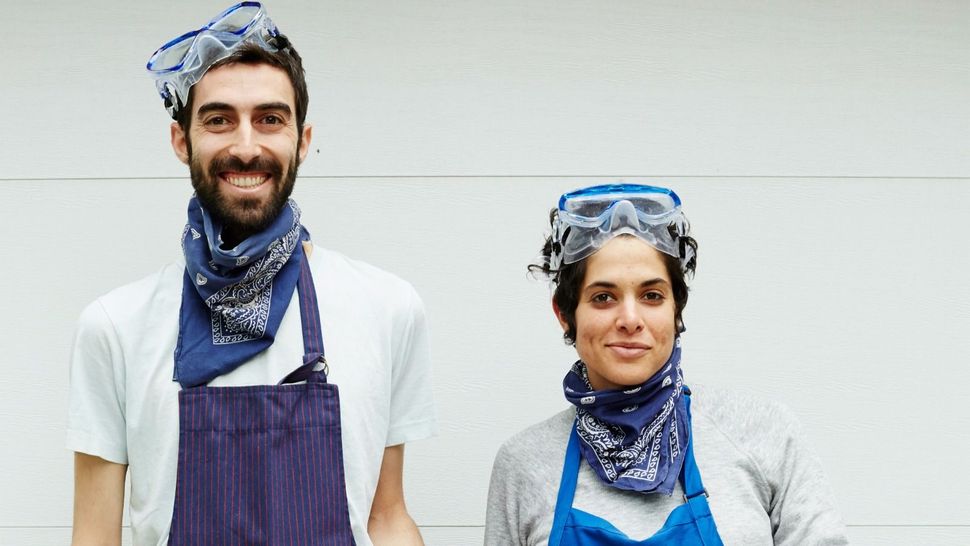 Wondering why Gefilteria peeps Jeffrey Yoskowitz and Liz Alpern are sporting protective eyewear? It has to do with the horseradish and grater we had to crop out of the photo. Image by Lauren Volo

Last week, I had breakfast with Jeffrey Yoskowitz and Liz Alpern — co-founders of the boutique Jewish food company, Gefilteria, and authors of the forthcoming cookbook “The Gefilte Manifesto: New Recipes for Old World Jewish Foods”.

We gathered for bagels at Hudson Eats, an upscale food court on the southern tip of Manhattan that has become a mothership of artisanal foods, including a kiosk of the wood fired bagel shop, Black Seed Bagels. Inside a glass-filled atrium with Gucci and Burberry shops looming nearby, our surroundings felt oddly opulent. But the bagels were still warm, and the wide tables overlooking the glinting river outside were great for catching up with some old friends.

For the near-decade that I have known, dined with and occasionally collaborated with Jeff and Liz, they have always felt like kindred spirits. Like me, they are people who got into the world of Jewish food not because it was trendy, but because it felt like an authentic expression of who they are, and because they sensed they might have something to add to the conversation.

Starting from scratch, they wrote a manifesto about the importance of reclaiming Jewish cuisine’s time-honored foods and launched their business with a high-quality take on Ashkenazi cuisine’s most infamous appetizer, gefilte fish. Their version is a far-cry from the soulless jarred stuff that most people associate with gefilte fish. It is made in small batches, uses sustainable fish, and is truly delicious, even without a dollop of horseradish.

In the days before Passover in 2012 — their first holiday in business as gefilte fish makers — they spent hours in a cramped synagogue kitchen in New York’s East Village grinding hundreds of pounds of fish while a young Yiddish singer (another friend of mine, Benjy Fox-Rosen), played a CD-release concert in the social hall outside. Quite an auspicious way to start a Jewish food business, no?

“Everything we did for the first three years of our company was new to us. We just had to jump in and learn on the job,” Yoskowitz said. As someone who has made a career as a food writer without formal culinary training or a degree in journalism, I know the feeling. “Luckily, people took the leap of faith with us,” Alpern said. “And soon, we became the gefilte people.”

Early on, they toyed with what it might mean to scale up their artisanal gefilte fish to compete with the big boys of Jewish food production like Manischewitz or Rokeach. But they quickly realized that was not the path they wanted. “The bigger you get, the more divorced you become from the food you’re producing,” Alpern said. “We couldn’t imagine sitting in some board room making decisions far away from the actual food.”

“What we really wanted was to put our recipes directly in people’s hands and give them the confidence to make this food,” Yoskowitz said. So they doubled doubled down on the educational portion of their mission. While continuing to offer their gefilte fish seasonally (around Passover and Rosh Hashanah), they began to travel around the country to teach cooking classes and host pop up events and dinners — including the Passover seder at the James Beard Foundation — that showcase Ashkenazi food at its best.

Their book, out in mid-September, is another major step in that direction. The collection of recipes aims to, as Yoskowitz put it, “recover the flavors of Ashkenazi cooking that got lost as Jews moved from Eastern Europe to America, or even from the Lower East Side to the suburbs and beyond.” So there’s a chapter on soups and dumplings and another on the many varieties of pickles that once brightened up the Ashkenazi table in the dead of winter. There are recipes for creamy noodle kugels with spiced plums, home-cured pastrami and updated classics like kimchi-stuffed cabbage. One of my favorite recipes is a homemade butter flavored with everything-bagel spice — a perfect breakfast spread to pair with a slice of Jewish rye or a bialy (both recipes that can be found in the book.)

Another delightful case in point is the cookbook’s recipe for Roast goose with apples and onions. In the old country, geese were prized within the Jewish household for their ribbons of fat (great for rendering into schmaltz), their feathers for down pillows, and, of course, their meat for roasting. “In the early 20th century, you could find Jews trying to raise geese on the Lower East Side,” Yoskowitz said. Of course, the practice of raising backyard poultry didn’t stick in Manhattan, and geese were replaced by the more industrial-friendly chicken. “The Gefilte Manifesto’s” recipe, then, helps capture a food that once delighted our ancestors, and brings it to the contemporary table.

For those cooks who might be intimidated by the thought of roasting a whole goose or making homemade pickled beets, fret not. Many of the dishes in “The Gefilte Manifesto” fall into the quick-and-easy category. And for those that are more of a project, Yoskowitz and Alpern offer substitutions and workarounds. “We provide shortcuts that don’t dilute the quality or spirit of the dishes,” Yoskowitz said. In other words, you won’t find wonton wrappers subbing in for dough in their kreplach. But if you don’t have a batch of homemade lacto-fermented pickles on hand to make their pickle brine bread, they suggest subbing in the liquid from a store-bought jar.

Talking with my friends over breakfast, I couldn’t help but kvell for them. Their gefilte fish, their events and now their cookbook are changing the conversation of what it means to make and connect with Ashkenazi Jewish food.