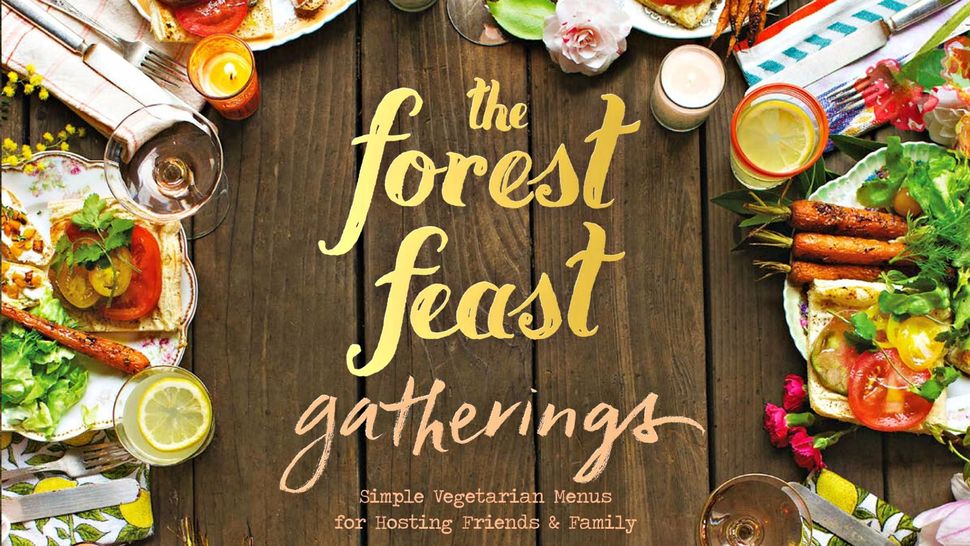 Image by Courtesy of Abrams

This is an occasional column in which the writer evaluates a new cookbook by making some of its recipes, sharing the dishes with friends and asking her guests what they think of the results. She recently cooked her way through “The Forest Feast Gatherings: Simple Vegetarian Menus for Hosting Friends & Family” (Abrams) by Erin Gleeson.

Following the success of her best-selling first cookbook, “The Forest Feast: Simple Vegetarian Recipes From My Cabin in the Woods,” and her second, “The Forest Feast Kids,” Erin Gleeson is back with her third.

No doubt, Gleeson already has a built-in audience, but for those who don’t know her work, here’s a quick summary: In 2011, she and her husband left New York City for her native California and found a cozy cabin in the woods to live in. Her husband is a Reform rabbi, and while he was at work in Silicon Valley, Gleeson — who had been a food photographer in New York — was inspired by the natural beauty around her to completely change the way she was shooting food. At the same time, she began creating simple recipes inspired by the wonderful local produce she now had access to.

Gleeson painted with watercolors as a child, and went back to them to create titles for her recipes. She started shooting the raw ingredients on various backgrounds in natural light. Slowly, her whimsical and unique style began to emerge, and she put her images online to attract editors. Soon an agent came calling.

A love of entertaining was one thing that brought Gleeson and her husband together and this book is even more focused on entertaining than her first. While the last one contained some Jewish recipes, this one does not. But Gleeson writes in her introduction that both she and her husband grew up in families for whom bringing people together over food was important, and that many of the gatherings they host now are Shabbat dinners.

Among Gleeson’s entertaining advice is the story of how her husband’s family has a tradition of going around the table sharing a highlight of the week, and that this practice can be a great ice-breaker for dinner party guests who don’t know each other.

The new book is broken down into different kinds of menus, from seasonal to cocktail party to one that’s vegan and gluten-free.

While Gleeson’s recipes aren’t complicated, her instructions are as minimalistic as possible (too much text would ruin her images); so as with the last book, sometimes instructions can feel a bit vague. And there’s no doubt that this is a highly aspirational book — it could leave one feeling a bit inadequate as a host. My guess is that none of Gleeson’s readers live in a place quite as cozy or beautiful as her cabin in the woods. But of course that’s not the point.

For this taste test, I chose the fall feast to try, thinking it would be an ideal menu to serve during Sukkot.

Gleeson begins this menu with a pomegranate punch (which I actually served at our Rosh Hashanah dinner). It requires freezing pomegranate seeds in the bottom of a Bundt cake pan, resulting in a frozen ring of pomegranate seeds floating in the sparkling punch. This was incredibly easy to do, and was definitely a great way to start a dinner party. It would be a festive and fun way to kick off dinner in a sukkah.

The appetizer for this menu is crostini (baguette slices lightly toasted with olive oil drizzled on top) with a schmear of fresh goat cheese, topped with small cubes of roasted butternut squash, fresh thyme leaves and flaky salt.

Our friend Carle loved the fresh thyme, and thought this would be a great way for kids to get their vegetables, while my husband Paulie declared it a “very successful bite,” and appreciated how the squash cubes were toothsome and not mushy. Carle’s partner and our friend Adam wondered why the goat cheese was overpowering the squash, and we surmised it might be that the squash was the first of the season, and hadn’t fully developed its sweetness yet. I have to say that I ignored her directions for roasting, as I knew my high-powered oven would incinerate such small cubes if I roasted them for 20 to 25 minutes at 400˚ F as suggested. I roasted them in about 10 minutes.

The salad featured baby kale leaves, pear slices, pomegranate seeds, chopped hazelnuts and shaved pecorino cheese. (Gleeson recommends her favorite vinaigrette recipe, but I diverged from that and made my own, since I happened to have pomegranate champagne vinegar in my pantry.) We all appreciated the use of baby kale in this salad, a slight variation on the ubiquitous kale salad. I especially loved the pomegranate and hazelnut combo.

The main dish was a lasagne, featuring layers of mashed acorn squash along with fresh scallions and sage mixed in with the noodles, ricotta and mozzarella and marinara sauce. While Carle found the sage a bit overpowering, the rest of us liked it. What we found disappointing was that the squash got lost — it was completely undetectable among the other competing flavors. We would have liked some spinach or mushrooms in there as well, as that would have raised the veggie quotient.

A side dish of whole roasted carrots with za’atar topped with Greek yogurt, cilantro and sesame seeds was a favorite of all of us. We appreciated how the carrots were cooked whole, but Paulie wondered whether parsley wouldn’t have been a better choice of topping than cilantro.

Dessert was a pear-thyme galette made with puff pastry, fig jam, Gorgonzola, sliced pears, walnuts and fresh thyme. It was so delicious that we could find no fault with it, and we felt it was a perfect fall confection.

While each dish on its own was delicious, we felt the problems here were in menu as a whole. I purposely invited people who were fine with gluten and dairy, but we all felt there was too much of both. The bread in the crostini, the noodles in the lasagna, and the puff pastry in the dessert left us all feeling particularly full.

This menu called for five different kinds of cheese (chevre, pecorino, mozzarella, ricotta, gorgonzola) plus the Greek yogurt for the carrots for extra dairy. While cheese is one of my favorite food groups, I wouldn’t have had it in every dish. (I tried serving the salad without the pecorino, but of course it was much better with, because the burst of saltiness enhanced the flavors.)

We couldn’t help but feel that this particular menu harkened back to the days of the old Moosewood cookbook, which also favored a lot of dairy.

I also noticed that numerous ingredients were repeated in this menu. For instance, pears in the salad and dessert; squash in the appetizer and main; and cheese, cheese, cheese. Interestingly, our menu was not representative of the rest of the ones in the book, which don’t have these issues, so fear not.

For those who love to entertain — or for those who might find it harder than some — Gleeson’s books are chock-full of fun and festive ideas, and recipes that can help anyone feel like a better host.