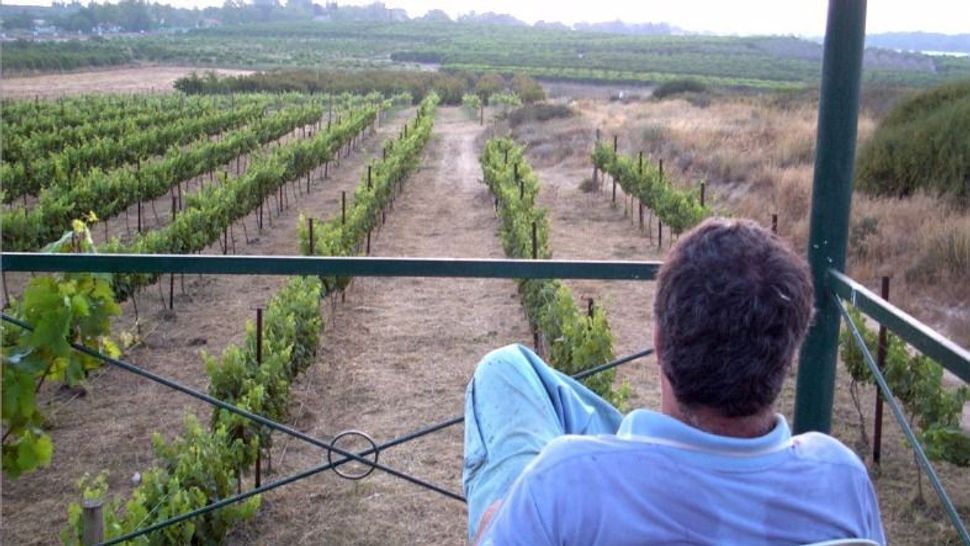 The writer surveying his vineyard. Image by Courtesy of Zeev Smilansky

But all of this pales in comparison to the challenge of making non-kosher wine in Israel, as I do. I have good reason for making the decision to shun the kosher laws surrounding wine production. I did so on moral grounds.

I’m not sure if you, dear reader, are aware, or care, about what exactly kosher wine is; but whether you are Jew or Gentile, Israeli or not, you should be aware that wine from Israel is at the center of a maelstrom of religion, identity, social pressure, politics, law and the intense tension between tradition and modernity.

The Jewish religion centers on separation and on distinction. We should separate flax from wool, meat from dairy, Shabbat from workdays — but first and foremost we separate the Jews from the Gentiles: “the people shall dwell alone, and shall not be reckoned among the nations” (Numbers 23:9), a verse that every Israeli knows. The regulations underpinning food consumption were set millennia ago, and compiled, formalized, deepened and tightened over millennia of tumultuous Jewish history. Thus, for example, the simple rule that “Thou shalt not seethe a kid in his mother’s milk” (Exodus 23:19) turned, over the centuries, into utter and complete separation of any meat product from any dairy product, including separate kitchen sinks, eating hours and utensils. The complete rulebook discussing this command would fill a community library.

As for wine, the question of its kashrut (“kosherness”) has a history of its own. Similar to rules of food consumption, restrictions evolved over the centuries. In the first chapter of Daniel, Daniel and his companions refused to drink “libation wine” — wine that was used by the ancient peoples of the Middle East for idolatry. Today, it is accepted by all that the custom of libation is extinct, and, specifically, wine made and used by Christians is not “libation wine.”

Nevertheless, the popular feeling against the “goyim” (gentiles) led to the custom that a goy should not be allowed to touch a barrel or a bottle of wine, lest it lose its kashrut. Rashi, the chief commentator on Jewish law, could not find a legal basis for this tradition in the written scriptures. Rashi studied in what is today Mainz, Germany, a well-known wine region; in the 11th Century, the time of Rashi, the economy of the region was based on grape growing and winemaking. After much deliberation, not being able to find the justification he sought, but respectful of the popular feeling against non-Jews, Rashi noted that a container of wine touched by a gentile is “forbidden of enjoyment” — meaning, not only is the Jewish owner of the wine not allowed to drink it, but he is even forbidden to sell it (say, to the goy who touched it) and enjoy the proceeds of the deal, and must pour the expensive liquid down the drain. This even if the goy touched the barrel inadvertently (you would be surprised by the depth of discussion, over the centuries, of the fine points of barrel-touching by goys).

Rashi relayed that the main reason, originating in the Talmud, was “because of their daughters,” meaning that if you drink wine with a goy, you’ll soon become friends with him, and before you know it your son will be married to his daughter, and the offspring of this union will not be Jewish. Thus, separation of wine ensures separation of its drinkers. It is sensible to believe that the girls of south Germany and Alsace were as beautiful and attractive in the 12th Century as they are today, and Rashi’s reasoning makes sense, if the Jewish people were to remain undiluted among a larger, stronger, different population.

In the evolution of the Jewish observance, kashrut demands have tightened dramatically. In strict communities such as Chabad, toy bears and bedsheets printed with cute bunnies are forbidden — you should not let children even see the creatures they are not allowed to eat, thus keeping their environment “pure.”

And in some kosher wineries around the world, the clear wine pipes running through the filling room will be covered by the officiating rabbi with opaque aluminum foil, lest the local workers even direct their unpure eyes at the kosher wine running through them. What is not kosher — including bears, bunnies and goys — is considered unclean; despicable. And, more pertinent for us non-observant Israeli Jews — if you are not a “formal” Jew and do not follow the Orthodox ways to the last detail — then you are as good as a goy, meaning that if you touch a barrel of wine, it loses its kosher status.

Thus, in Israel, where kashrut is wielded by the government, if you are a winemaker and wish to make kosher wine, you have to hire a “first class” Jew (you being second class); give him (always him — a woman would certainly not be allowed in the winery, for reasons too base to mention here) the keys to the winery; and whenever you want to taste a glass from a wine tank or barrel, you have to ask him to get it for you — to interpose between you and your wine, lest your unclean touch will foul it.

Indeed, with the increasing conservatism, ethnicism and religious feelings in Israel, it is not easy today to find supermarkets and shops that will offer non-kosher wine. Even restaurants that are open on Shabbat are reluctant to show non-kosher wine on their menus. Most Israeli wineries have turned kosher — including those in kibbutzim (socialist, often anti-religious communities) and wineries owned by non-Jews. And, if an Israeli winery lacking a kosher stamp would try to export its wine to, say, the U.S., it would find itself in double jeopardy: First, the general public is hardly aware that there is such a thing as “Israeli wine,” much less that it is exciting and delicious. Those that do understand are often Jewish, and they are perplexed, if not offended, to see non-kosher wine from Israel.

What is a winemaker to do? For many wineries, catering to the eccentricities of modern Jewish law is the only choice. For the few who really care about their Jewish identity, yet are not prepared to consider themselves second-class Jews (my wife and I would sooner pull out our beautiful vineyard and stop making wine than give in to the notion that we are second-class Jews, whose mere touch would foul up its kosherness), an important uphill struggle awaits — a struggle for what it means to be a Jew in Israel in the 21st Century.

Zeev Smilansky is scientist, writer and winemaker from Meishar, Israel, whose Meishar Winery wines are available from Israeli Wine Direct.