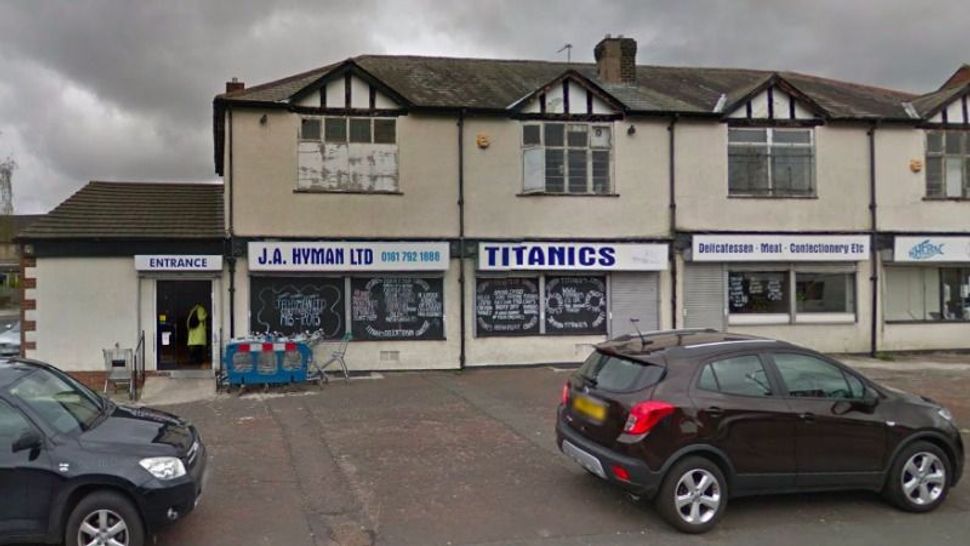 The iconic “Titanics” kosher deli in Manchester, England, has closed for good. Image by Screenshot from Google Maps Street View

JTA — Titanics, a historic kosher deli in Manchester, England, has met the same fate as its namesake: It’s gone under.

The last branch of the store, the oldest kosher delicatessen in Manchester — named for the ill-fated liner because its founder survived the famous shipwreck — was recently forced to close its doors.

“It is a very sad day and the end of an era in Manchester,” Stanley Hyman, the grandson of founder Joseph Hyman, told The Jewish Telegraph.

“The community has been taken over by the big supermarket chains,” he said. “At Pesach, for example, the supermarkets sell everything for less than half the price, so everybody started to go there because it was cheaper.”

Originally from Russia, the deli’s founder, Joseph Hyman, left for the U.S. to escape pogroms. But a captain who was supposed to take him to New York ended up dropping him off in Glasgow, in what his great-grandson Richard Hyman told the BBC “was apparently a common scam at the time.”

But the eldest Hyman wasn’t deterred. He saved up money to get a third-class ticket on the RMS Titanic, then the largest ship afloat. When disaster struck and the ship sunk on its maiden voyage in 1912, Hyman was fortunate enough to get a spot in a lifeboat. (As it happens, he was in the same boat as J. Bruce Ismay, the owner of the White Star Line.)

Only a quarter of third-class passengers survived the disaster and the odds were even lower among men, according to the BBC. More than 1,500 people died in the shipwreck.

Though Hyman arrived in New York as planned, he ended up moving to Manchester, where he had relatives. In 1913, inspired by New York delis, he opened his own food establishment, which became known as “Titanics,” due to his unique tale of survival.

Hyman died in 1956, but his relatives continued to manage the deli.

“I feel proud to be part of the Titanic dynasty of survivors,” Richard Hyman, who was managing director of the shop until its closing, told the BBC in 2012.

According The Jewish Telegraph, Hyman was “devastated” and “too upset to talk about” the deli’s recent closure.