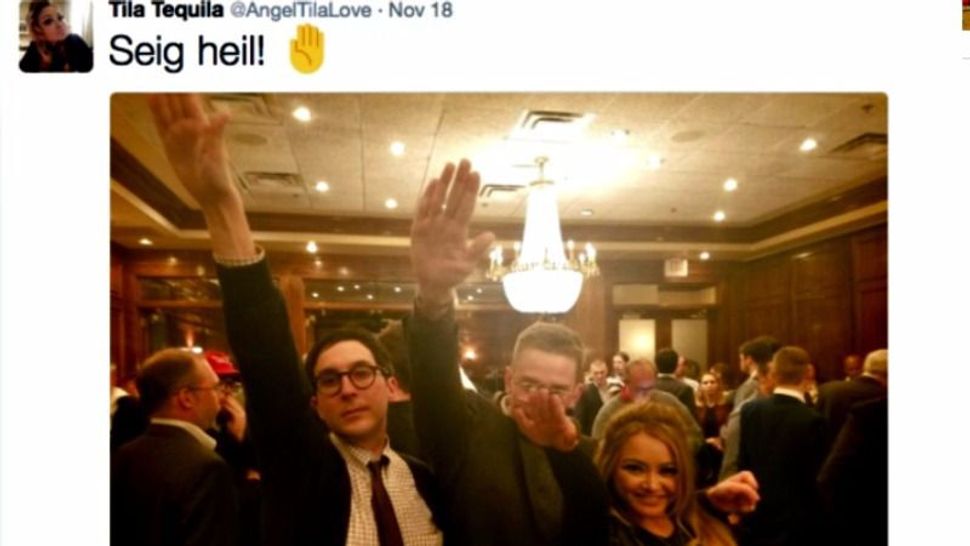 I honestly can’t believe that on the same day that I posted an article about a Portuguese restaurant that was vandalized by “activists” who apparently opposed the chef’s recent trip to Israel for a food festival, I now have to report that a DC-area Italian restaurant just issued an apology for inadvertently hosting a white nationalist dinner at which some reality TV “star” I guess I’m supposed to know about posed for the camera while giving a Hitler salute with some of her anti-Semitic associates.

So do I really have to report this? Is this type of restaurant news appropriate to serve up on our food channel? It’s something I’ve been thinking about. Shouldn’t the food section offer a kind of respite from all the negative happenings? In general, I think the answer to the latter question is yes.

But as the food editor of a Jewish publication, where I’m charged with the task of covering anything of importance to the Jewish community that’s happening in the food world, I think the answer to the first question also has to be yes.

Here is the apology issued by Maggiano’s Little Italy in Chevy Chase, Maryland, on its Facebook page:

On Friday night, Maggiano’s in Friendship Heights was the inadvertent site of a protest that caused us to close our restaurant to protect the safety of our Teammates and Guests. The protesters were upset because of a banquet we were hosting for a group called the National Policy Institute (NPI). This was a last minute booking made Friday afternoon, and the reservation was made under a different name, therefore we were not aware that NPI was dining with us or what the group represents. After the event, an attendee sent a tweet in which she made a “Sieg Heil salute” in support of Hitler and white supremacy. This expression of support of Hitler is extremely offensive to us, as our restaurant is home to Teammates and Guests of every race, religion and cultural background. We want to sincerely apologize to the community of Friendship Heights for inadvertently hosting this meeting, which resulted in hateful sentiment. We want you to know that at the suggestion of one of our Guests, we are donating the profits from our restaurant sales on Friday, $10,000, to the DC office of the Anti-Defamation League, which for decades has been working to bring people together in peace and understanding.

In case you skimmed and missed it: Maggiano’s said that it is donating the $10,000 earned from the dinner to the Washington, DC, office of the Anti-Defamation League. So there’s that.

I’d like to go back posting stories about Thanksgiving food now.