Israeli-Indian Jew in Mumbai Unearths the Spice of Her Life 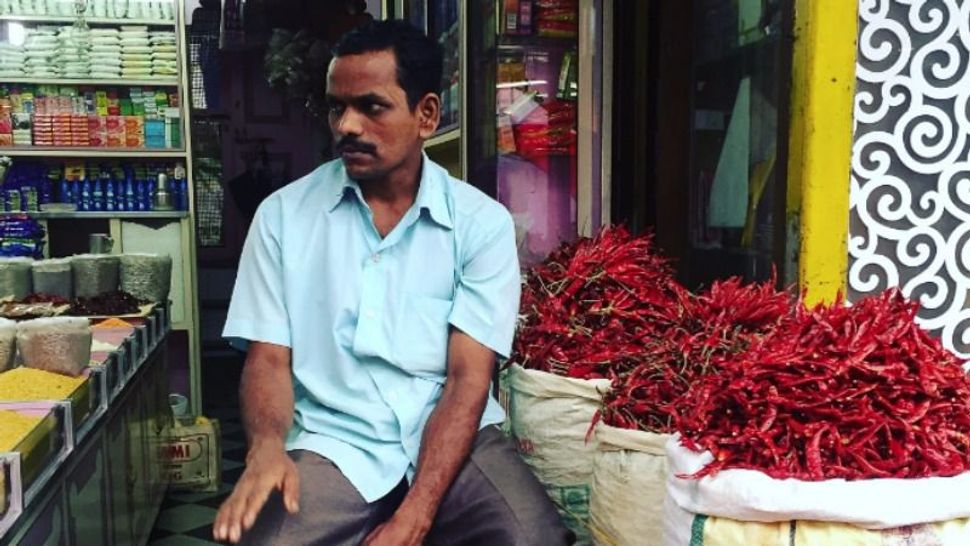 Little did I know, when my Indian-Israeli aunt insisted on visiting a certain spice shop during my visit to Mumbai, that it would be in the Lalbaug spice bazaar. I had marked the bazaar as a must visit on the Google map I “drew” while planning my trip to India. Like my aunt, many Indian Israelis visit this shop when they land in Mumbai. Lalbaug, the neighborhood, is also my dad’s old stomping ground.

It was a rainy day, the last of the monsoons. Our large hotel umbrellas were threatening to poke people in the eyes and get entangled in the protective tarps above the merchant’s stalls that line the narrow sidewalks, and strip them right off. A self-appointed English-speaking guide accosted us as soon as we entered the market. My aunt, for the second time in two days, was yelling in Marathi (the language of the state of Maharshtra), resisting this stranger’s relentless attempts to steer us in the direction of his friend’s shop. The first “volunteer” guide had been shooed away by my aunt the day before, at the Crawford vegetable and fruit market to the South of Lalbaug’s bazaar. This time, the umbrella was her tool and prop of intimidation, a sword and a baseball bat in one. Bollywood couldn’t have scripted a better animated drama. 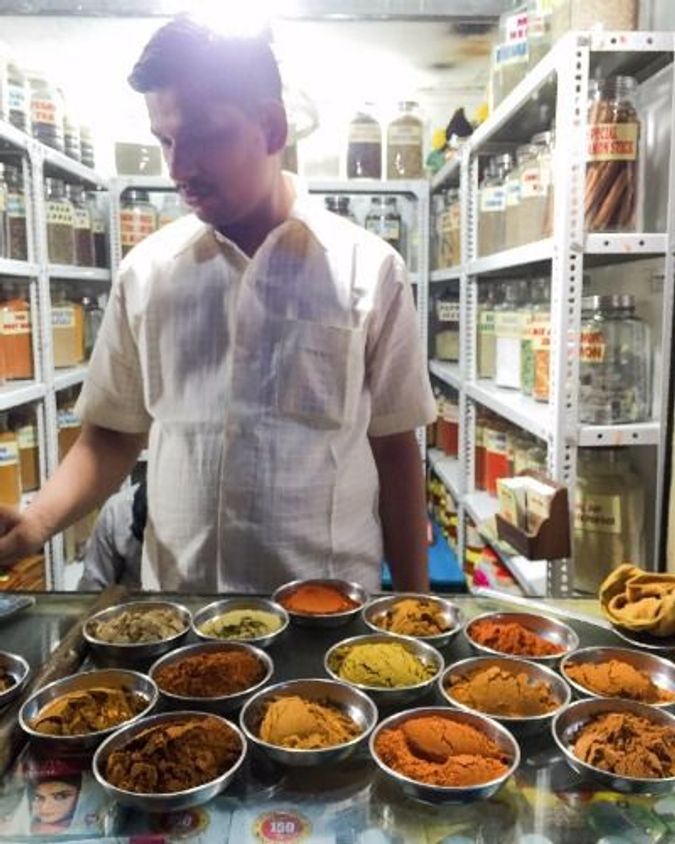 Spices on display at the Lalbaug spice bazaar. Image by Shulie Madnick

We searched for this particular wholesaler, which doubles as the retail spice shop that my aunt knew of, walking up and down this one lane several times. When I gave up and turned towards the main spice-shops drag, with displays of perfectly colorful spice mounds, my aunt disappeared. Turns out we didn’t walk far enough. She found the shop up at the corner. We proceeded to deplete everything in sight.

Masalas (spice mixes), for us, are best bought in Mumbai. My dad was born in Navgaon, a coastal village just south of the city. At a young age, he moved to Mumbai. My mom was born and raised in Mumbai. Both my parents moved to Israel with their families in the 1960s. This shop’s masala (“curry”) mixes are true and authentic to the (still obscure in the U.S.) Maharashtrian cuisines that I grew up on. (Mumbai is the capital of the state of Maharashtra and Malvani, which is coastal Maharashtrian.)

Whole spices, on the other hand, I bought when I flew to Cochin, God’s Own Country, Kerala, where they grow on the misty hillsides a few hours east of the Arabian Sea coastline.

I quintupled each 50- and 100-gram masala packet I bought, as little gift parcels for my mom, who is too ill to travel, and my three sisters, back in Israel. I bought a fish masala and the most beautiful deep purple kokum, used as a souring agent, to make the famed Malvani fish curry I encountered only once in the U.S. It was at a buffet dinner catered by the Woodland restaurant group in College Park, Maryland, during an annual Hanukkah celebration at the Indian Ambassador’s D.C. residence. 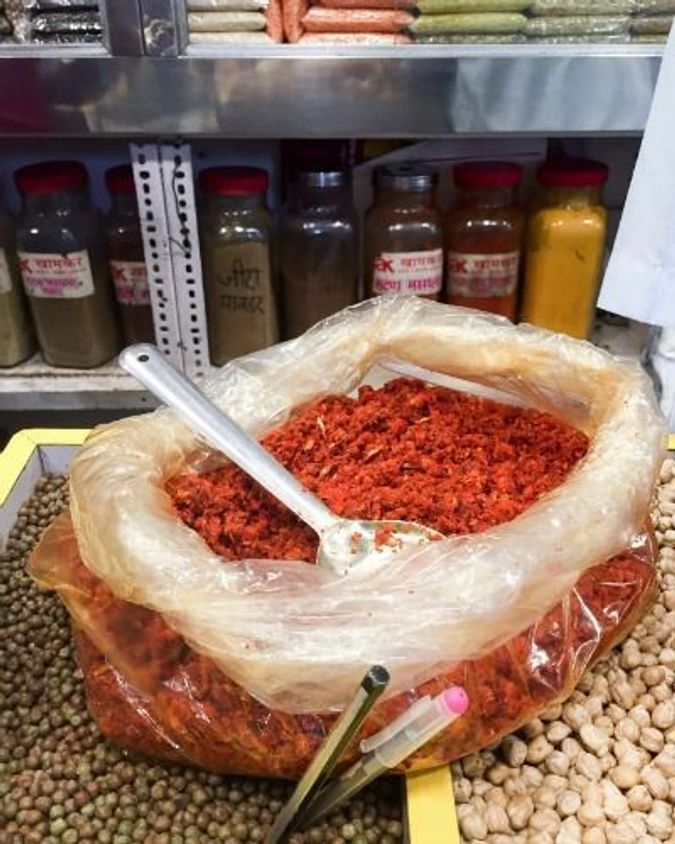 Maharashtrian chicken and vegetable masalas were on my shopping list. Grated dried coconut and garlic chutney with a generous dose of laal (red) mirchi (chili pepper) to be eaten with Indian flat bread, was an impulse buy. Indian saffron, from Kashmir, we bought at a premium. I wonder, was it the price of gold, or higher? The saffron most commonly found in the U.S. is from Spain, and tastes slightly different, arguably more pungent.

The spice shop was also stocked with grains and pulses. We bought the somewhat elusive chota (small) rawa (semolina) there. It’s a super-fine semolina grain, as opposed to the more commonly found larger-grain semolina. Chota rawa is used in making a sweetened breakfast dish called sheera. Traditionally it is flavored with cardamom, and occasionally saffron is added, mixed in with cashews and raisins and doused with plenty of ghee (clarified butter).

Growing up, my mom made the dish for breakfast on the run. I didn’t care for it much. Only in Mumbai, where it was served at the breakfast buffet in our hotel, did I fall for it hard. The finer grain, which was impossible to come by in Israel (where I was born and raised) elevated it to a more refined breakfast. 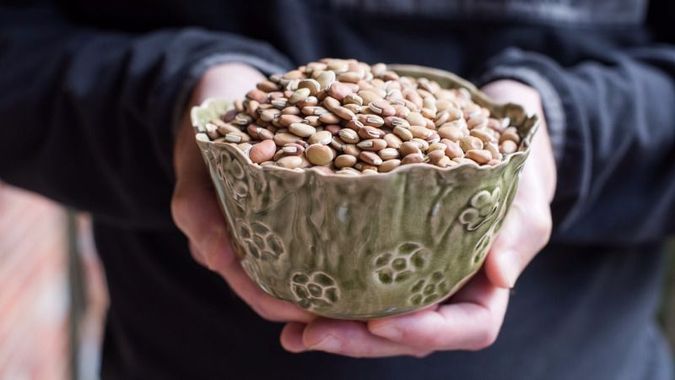 Kadwa wal (val), which literally translates to bitter field beans, are the seeds of a purple hyacinth bean vine. Image by Shulie Madnick

The shop also carried kadwa wal (val), which literally translates to bitter field beans. They are the seeds of a purple hyacinth bean vine (Dolichos lablab). The hyacinth bean vine, which is grown in the U.S. as an ornamental hedge, grows by the rice fields in the villages south of Mumbai during monsoon season in the summer. The seeds are considered toxic when raw. The green fresh pods were often consumed in-season, boiled and salted, similar to edamame. The dried seeds have a rough brown skin and are sprouted and peeled before cooking.

The sprouted and peeled purple hyacinth bean seeds are then cooked in an onion, green chimichurri-like mix, along with tomato and spices (curry). The dish is called bidah (or birdah). The bidah is eaten with what we call chapati (more widely known as puri), a deep-fried bread, or with rice.

This classic Maharashtrian bitter bean “curry” was adapted by the Bene Israel Indian Jews as a break-the-fast meal on Tisha B’Av (the ninth of Av). It’s a dish we traditionally make only once a year.

The fast on Tisha B’Av, which usually falls in August, marks the destruction of both the first and second holy Temples in Jerusalem. The book of Lamentation is recited on Tisha B’Av. In chapter 3 verse 15 it is written: “He has filled me with bitterness, Sated me with Wormwood.”

To the bidah, local Konkanis add shredded coconut — a common ingredient in western coastal cuisine — and kokum, according to Neelam Saxena, an Indian Hindu colleague of my husband’s who is originally from the Konkan coast. “No festivals in (the) Konkan belt are complete without this dish,” Saxena added. “It’s a hit in the family, generally served with white kolum rice, which is also grown in the Konkan belt of Maharashtra.”

I brought five (half kilo each) packets of kadwa wal (the purple hyacinth bean seeds). Shortly after landing back in the U.S., I cooked the bidah with some trepidation, given its toxicity (when raw) and its slightly bitter characteristics. My husband, Jonathan, not only liked it, but he also (thankfully) survived.

Fine semolina, kadwa wal (sometimes at the frozen section, pre-sprouted), kokum and various masalas and whole spices can be found at Kalustyan’s in Manhattan, Patel Brothers shops throughout the U.S. (both also sell online), or at your independent local Indian grocer. Sheera can also be made with regular semolina, which is found in most supermarkets.

Israeli-Indian Jew in Mumbai Unearths the Spice of Her Life