What’s With The Last-Minute Passover-Getaway Cancellations? 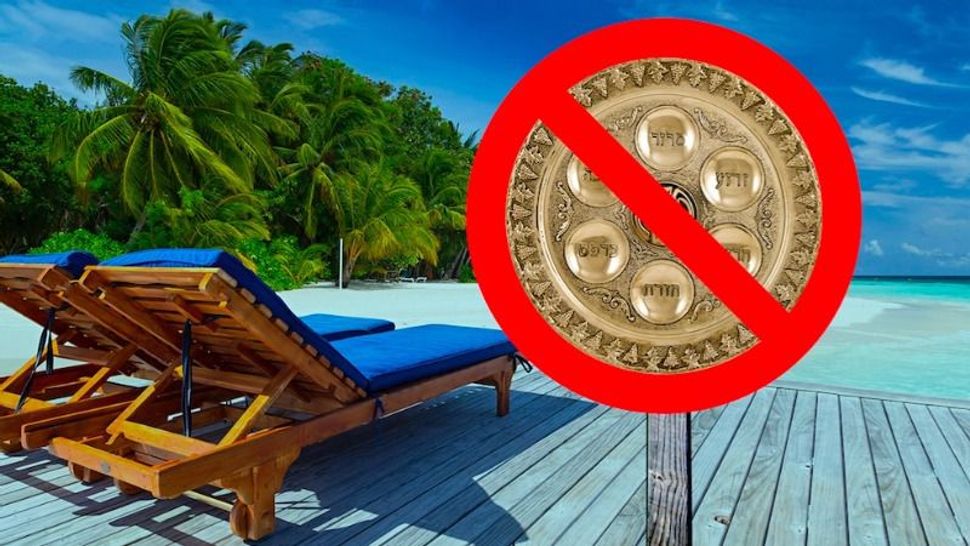 First to be swatted was the Tenenbaum Family’s Pesach For Less, which was to be hosted at the Dolce Hotel & Conference Center in Basking Ridge, New Jersey. It was cancelled in February.

Next, in mid-March, Prime Experience — a subsidiary of Joey Allaham’s Prime Hospitality Group, which owns kosher restaurants including Prime Grill — cancelled a program that was to be held at the Hilton La Jolla Torrey Pines in San Diego, California. Prime Experience rerouted the trip to New Mexico.

And then, finally, barely a week before the start of Passover, came yet another cancellation. On Monday, April 3, Perla Luxury, a Passover getaway company based in Antwerp, Belgium, cancelled its program at the Mitsis Blue Domes Kos-Greece, located on the Greek Island of Kos.

Passover travel programs are usually held in luxury hotels, which Jewish families of means may opt to participate in rather than staying home for the holiday. These vacation packages offer a carefree way of celebrating, doing away with the need to scrub every nook and cranny of the household to clear it of chametz and spend countless hours cooking for a large extended family.

Often these programs offer 24-7 five-star cuisine, sumptuous accommodations and day camps to occupy the children. Program boast rosters of entertainment and activities— from magic shows by world-famous magicians to cooking demos by top kosher chefs; from performances by talented cantors to inspiring lectures by a variety of expert speakers.

Not everyone can afford these lavish getaways, which is why “affordable” Passover programs have been gaining steam in recent years. Usually hosted in hotels within the Tri-State area, the hotels aren’t particularly extravagant, but they are an attractive option for less affluent Jews who want the Passover program experience.

Pesach For Less, a relatively affordable option run by Smully and Giti Tenenbaum of Lakewood, New Jersey, starting at $3,595 per couple for the entire Passover, was to be hosted at the Dolce Hotel & Conference Center in Basking Ridge, New Jersey. It was meant to cater to a small, haimish crowd of religious Jews. In February, matzav.com reported that the hotel had installed motion sensors in the rooms that would automatically turn on lights and adjust temperature upon entry. The organizers of the program felt that the sensors would cause their guests to violate Shabbat and Yom Tov observance and therefore wanted the hotel to override the system so guests wouldn’t trigger the sensors. Pesach For Less said that they had to cancel the program because the hotel refused.

Deposits of $950 were returned, according to Pesach For Less.

Cancellations of Passover programs do happen every year, but usually before Purim. It’s rare for programs to cancel so close to Passover. “You have contracts. You’re supposed to be having these lawyers go over these contracts, well before you make an agreement,” said Elan Kornblum, CEO and founder of Great Kosher Restaurants, a kosher restaurant guide and consulting site, and who has helped plan and run a few Passover programs himself. “Everyone knows exactly how it’s supposed to be. The hotels are investing a lot of time and money handing over their hotel to someone for ten days. For me, when I’ve dealt with hotels and contracts, everything is laid out perfectly. There are no surprises. There shouldn’t be. So when programs cancel, it’s more because there was an issue with the chef and there’s an issue where they couldn’t find enough people.”

But across the Atlantic, that doesn’t seem to be the case. Early this week, Perla Luxury’s Passover program on the Greek island of Kos was also cancelled, leaving hundreds of guests stranded. Literally. In a post on the Facebook group Great Kosher Restaurant Foodies (Kornblum is the group’s administrator), one group member, Jamie Levy, wrote that 23 of her group of 43 had already landed in Athens when the program was suddenly nixed. The group had planned to arrive a week early and were forced to book new hotel accommodations and coordinate with the local Chabad to arrange for kosher meals.

In a letter posted by Kornblum, Perla Luxury said of the hotel: “Not one agreement that we have made with them has been respected and every possible step we tried to make they have/had find [sic] to make it impossible.”

The letter goes on to say that the program coordinators tried to find alternate accommodations on the island. Although not explicitly stated, it seems the effort was futile and a revised itinerary couldn’t pull it together at the last minute. Perla Luxury said it will be refunding the cost of the program to guests until May 1st.

Another poster on the Great Kosher Restaurant Foodies group, Leah Weisz-Fried, who was also supposed to go to the Greek island, wrote that she had booked five rooms at the Greek resort, and wrote that it cost her family $300 per cancelled plane ticket, money that they will not be able to recoup.

Back in the U.S, less than a month before Passover, the Prime Experience Passover program also radically changed their plans. This year’s Prime Experience program was to be held at Hilton La Jolla Torrey Pines in San Diego. Billing the area as a “zika-free” location, Prime was able to attract travelers who had been wary of going to Florida for the holidays, despite CDC clearance.

According to the Prime Experience website, the program cost upwards of $10,000 per room. Registration for the program required a 40% deposit.

In 2015, Prime offered programs in three separate locations: Aspen, Colorado; Dana Point, California; and Puerto Rico. The Puerto Rico Passover Program, which was held in the W Hotel Retreat and Spa, was dubbed a disaster, according to an article in The Jewish Week, which details Allaham’s long list of legal woes. Four hundred angry guests reversed the charges on their credit cards because, they were quoted as saying, the program failed to live up to the luxury experience Prime Experience had promised. In response, Allaham said that there was hostility and sabotage from hotel management, including a particular incident where bread — chametz — was served at Passover meals populated primarily by Orthodox Jewish guests.

Since then, Prime Experience has downsized its Passover program to a single hotel. Last year, guests stayed at the Fairmont Miramar Hotel & Bungalows in Santa Monica. This year, Allaham chose the Hilton La Jolla Torrey Pines, which boasts views of a neighboring golf course and the Pacific Ocean.

Then the email, obtained by the Forward, was sent out: “I unfortunately need to share that our hotel in San Diego will not be able to accommodate our group.” Allaham wrote. “And despite multiple promises they made to us — the Hilton was simply not allowing us to accomplish the Prime experience that our customers have learned to expect from us.”

No one seems to know exactly what happened to cause the sudden cancellation. Allaham declined to comment for this article, saying he is in the midsts of an arbitration with the Hilton over the dispute that led to the cancellation.

Prime Experience has attempted to salvage the situation by relocating the program to the Hyatt Regency Tamaya Resort & Spa, in New Mexico, which has pueblo-style guestrooms with views of a sprawling mountain range.

Guests who did not want to relocate to New Mexico for the holidays scrambled to make alternate plans. Their deposits will not be refunded.

Instead, Allaham wrote, “To all of you who have paid for flights, I will be reimbursing you the costs associated with changing your flights. In addition, we will be giving all of our guests a 10% discount on their entire Pesach vacation stay.”

For some, though, the problem is more than financial. “Forget the money – dealing with your family with the second round of preparations is a pain,” said a single man who had planned to fly to San Diego with his parents and extended family for the trip.

“Other than the obvious inconvenience, they should have offered more than a 10% discount and switch to New Mexico,” said the traveler, who requested anonymity. HIs family had booked several rooms, and he said he felt that Prime Experience should have offered something more substantial, as well as a better explanation of why the trip was cancelled, other than that the Hilton couldn’t accommodate their needs. “Everyone knew that was baloney,” he said.

This family has chosen to book a new Passover trip with a different company. “They tried moving us to New Mexico, saying they were going to fly charters there,” he said. “My family wasn’t having any of that. We all said no thank you to New Mexico and bailed. There is nothing exciting about New Mexico.”

What’s With The Last-Minute Passover-Getaway Cancellations?