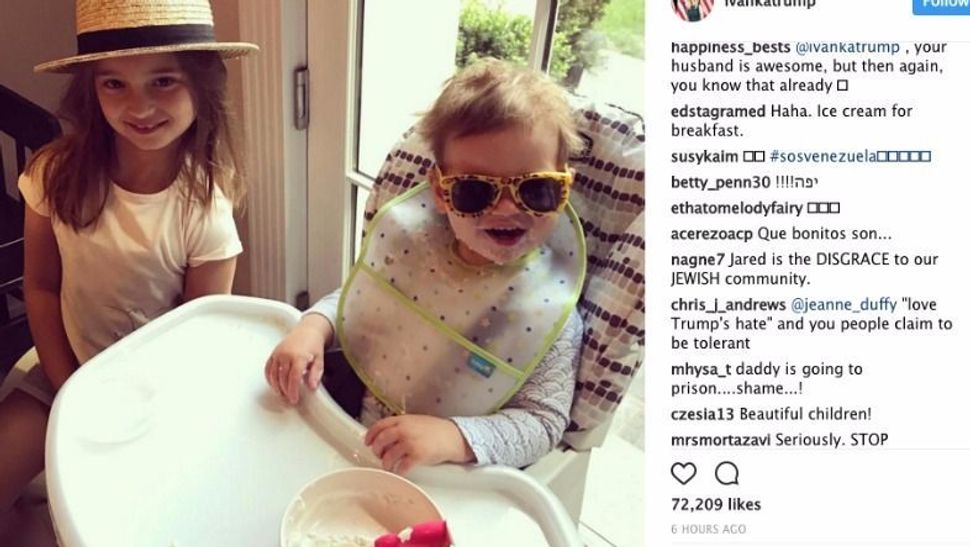 In response to this image posted by Ivanka Trump as her husband testified before Congress, someone commented, ‘Jared is the DISGRACE to our JEWISH community.’ Image by Instagram/@IvankaTrump

Ivanka Trump’s husband may have spent the morning appearing in Congress to answer questions, but it was just another perfectly blissful day in the Kushner house.

Or so it appeared in an image Ivanka posted on Instagram Monday morning of baby Theo in his highchair, donning sunglasses and smeared in what appears to be yogurt.

“Good way to start the day!” was the caption that accompanied the image, in which the Kushners’ daughter, Arabella, sits next to her brother wearing a jaunty straw hat.

The vibe positively screams “the father of these adorable all-American yoghurt-eating kids could never collude with the Russians!”

Comments responding to the photo ranged from “Happy baby and I love the hat!!!” to “Stop using your kids as a diversion.” One had a less-than-subtle commentary on Jared Kushner’s remarks to senators that he delivered a few miles away on Capitol Hill: “Looks like the food their dad is going to eat in prison #traitorJared.”