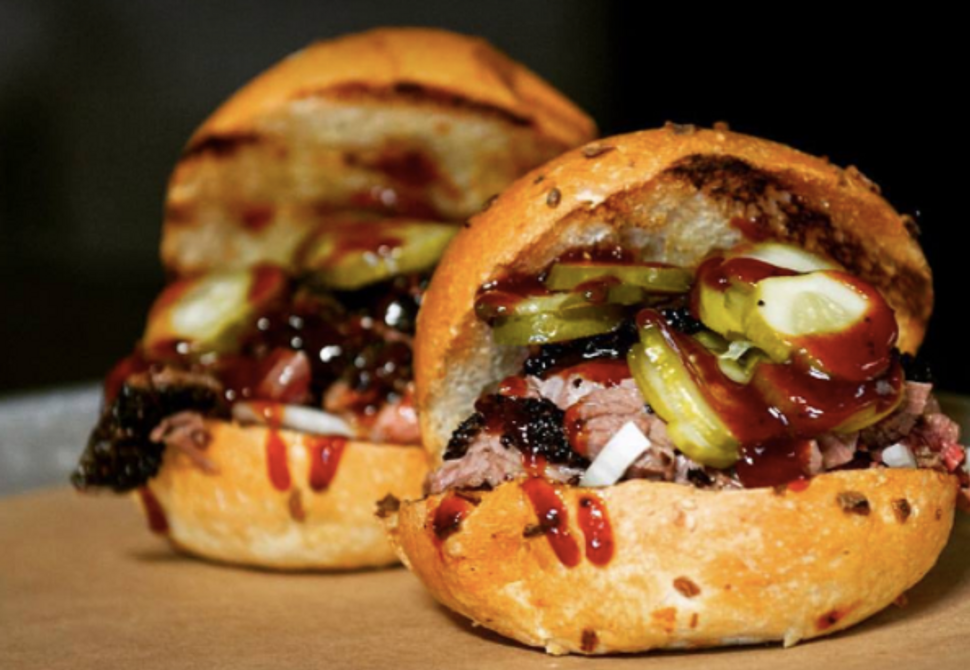 A brisket sandwich from Brooklyn’s Hometown BBQ may be a harbinger of things to come at Billy Durney’s new deli. Image by Facebook/Hometown BBQ

“I’m a kid from Brooklyn. I grew up around every deli you can imagine,” says Billy Durney, the pitmaster of New York’s most acclaimed barbecue restaurant Hometown Bar-B-Q. Among those delis, some Polish, others Italian or Russian, were Jewish spots like the Mill Basin Deli, and across the bridge in Manhattan, Carnegie, Second Avenue and Katz’s. “I think in a past life, I was a Jewish butcher,” Durney, who is Irish, jokes.

Early next year, he’ll open an homage to those delis, Jewish and otherwise, tentatively called Hometown Deli, in Brooklyn’s Industry City, Eater reports. The menu will be small with about 10 deli sandwiches from corned beef to pastrami, meatball parmesan to white fish. While the recipes aren’t set (Durney is currently in testing mode), he says the idea is not to “try to recreate the wheel.” Instead, he wants to give diners “the best version of the sandwich they’ve ever had.”

That includes reconsidering how meats like pastrami are smoked, and even what defines pastrami. Instead of smoking the navel cut as most delis do, Durney will use both cuts of brisket, which he explains leads to a richer sandwich. That meat will hang out in a tenderizing brine for five days, then get coated in a spice blend Durney developed at Hometown Bar-B-Q for his pastrami bacon. Which, he says, “is my joke to all my Jewish friends.” Then, the briskets will get a 16-hour smoke.

Nodding to Katz’s and other old-school Jewish delis, slicers will stand behind a counter in the deli making sandwiches. “We want guests to be able to see the carvers,” Durney says. When they go to construct the sandwich, they’ll keep the other elements traditional. Rye bread will most likely come from famed Jewish bakery Orwasher’s and be spread with mustard. While Durney’s a self-identified mustard obsessive who makes several varieties and says he currently has about 40 on hand, he’s sticking with a spicy brown mustard here. “Sometimes an old Russian Jewish mustard is what the doctored ordered for that sandwich,” he says.

Pastrami isn’t the only Jewish item on the menu. In the mornings and on the weekends, Durney plans to offer bagels with schmear, lox, and whitefish and says there might even be matzo-ball soup to fight off the winter chill if the team opens in February or March as they hope to.

He adds: “I think in my heart, I’ve always wanted to own a deli.”