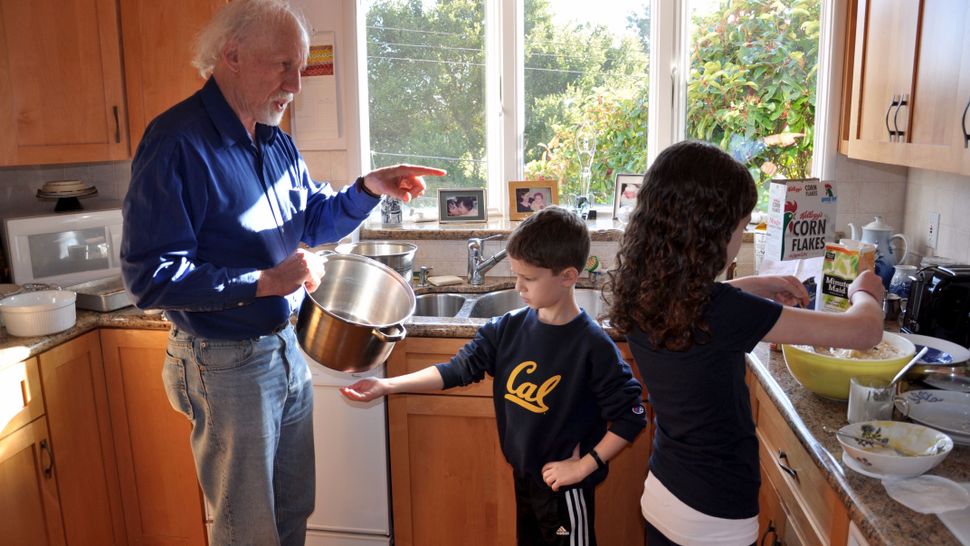 Professor Stanley Klein reveals a few of his culinary secrets to the author (at right) and her little brother, Henry, in 2008. Image by Courtesy of Gustie Owens

“My father would always say that there are two kinds of people: those who eat to live and those who live to eat,” my grandpa, who I call Zayde, said to me over the phone.

“I definitely eat to live.”

And, believe me, if you knew Zayde, you’d know that this could not be more true. As a tenured professor at University of California, Berkeley, known for his research in optics and neuroscience, my grandfather, Stanley Klein, has a food routine that’s just like his research: down to a science.

For decades, every morning, Zayde has started his day by looking at his computer and catching up on emails while drinking a glass of orange juice with his pills. Two prescription pills from the doctor and three of what he calls “suspicion pills,” better known as Vitamin C and multivitamins.

In Zayde’s first year of college at Caltech, he took a class with one of the most famous chemists of our time, Linus Pauling, who did extensive research on Vitamin C and wrote prolifically about the magical powers of the vitamin. “It was later shown that he was wrong, but out of loyalty, I will always take one every single morning,” Zayde said. “Every now and then I think about Linus when I take the pill and feel virtuous that I’m paying tribute to him.”

Next up, Zayde will turn to the New York Times or something else “to allow his pills time to digest before they get surrounded by food.”

Oatmeal time! In order to turn on his stove, which has had a broken pilot light for the past five to 10 years, Zayde has to turn on the gas and then light it with his lighter gun. “Since I have to turn the gas on before it ignites, some gas escapes so I have to back up two steps and take a deep breath of clean air.”

After putting a cup of oats in a medium saucepan, he adds a handful of raisins to the mix to let them cook with the oatmeal and water. Soaking them in the boiling hot water makes them very plump and juicy, almost as if you ate the grape as it was halfway done transforming into a raisin.

Zayde has never measured the water, and explained the correct ratio of oats to water as “whatever looked right.” After leaving the oats, water and raisins on the stove to cook, it’s time for his exercise routine: 60 sit-ups on the rug in his living room. Then with his remaining 30 seconds, he tidies the kitchen a little bit. By the time his sit-ups and quick tidy are done, he determines whether his oatmeal is ready by using a spoon to scrape the bottom of the pot — a teensy bit of the oatmeal needs to stick to the bottom for him to know it’s done.

Then he adds Fiber One cereal — what he described as “granola-y things” — and two-thirds of a banana. When I asked what he did with the other third of the banana, he responded, “Gustie, if you take two one-thirds, you get another two-thirds of a banana. So I take Monday’s extra third, I eat it with one third of a second banana on Tuesday, and I eat the rest of Tuesday’s banana on Wednesday.”

I felt stupid for even asking.

Zayde’s decades-old routine doesn’t stop there. His cleaning lady, Yolanda, comes every Friday. For many years, my mom would always nag him about how much clutter there was in his house, and when his house started to look very clean, we all gave Yolanda full credit and reverence. He corrected us immediately: His house wasn’t clean because Yolanda was cleaning it, it was clean because before Yolanda came every week he would tidy the house intensely to prepare for her.

Now, he prepares for her visits by grocery shopping every Thursday, when he buys a roasted rotisserie chicken and other “fresh things” he sees. When Yolanda arrives, she begins to work on a soup that we all fondly call “Yolanda soup.” It doesn’t have a recipe that I can include, because the recipe is half the chicken along with the contents of the fridge and whatever Zayde decides to buy that week, a random assortment of foods that Yolanda miraculously transforms into a delicious soup.

On Friday night, Zayde brings some of the soup to Shabbat dinner at my aunt’s house in Berkeley, eating the rest of the big vat of Yolanda soup — and the remaining half of a chicken — for his lunches and dinners for the rest of the week.

Gustie Owens is a senior in high school at Horace Mann in Riverdale, New York. She is editor-in-chief of her school’s award-winning weekly newspaper, The Record.