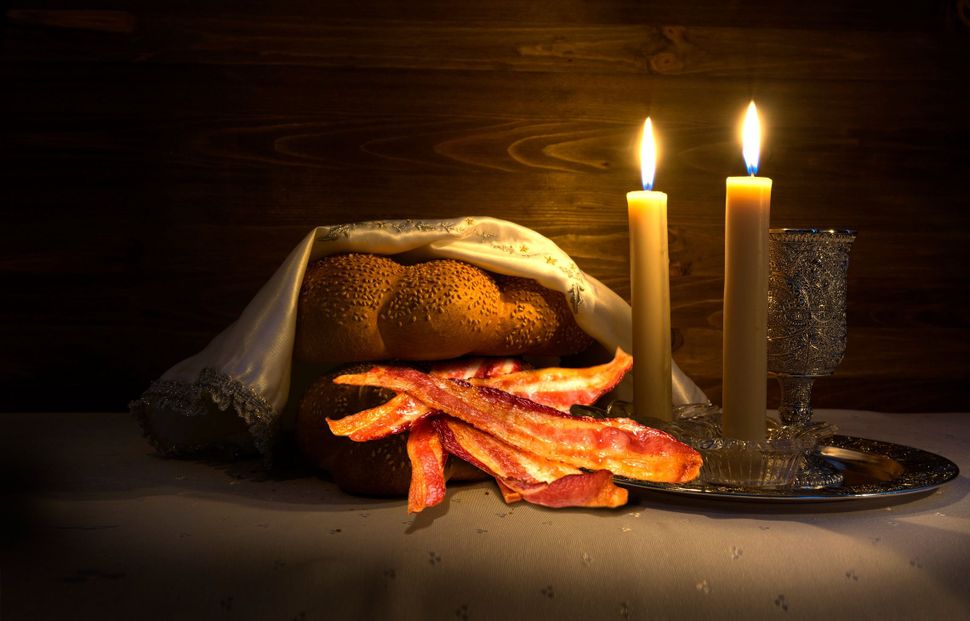 BOSTON (JTA) — In an article written for J: The Jewish News of Northern California and republished by JTA, David A.M. Wilensky describes with gusto the supposedly mouthwatering delicacies, including Peanut Butter Pie with Bacon and Pulled Pork Potato Kugel, consumed this month by “rabbis and foodies” at the Trefa Banquet 2.0 in San Francisco – complete with a communal blessing and a historical lecture justifying these juicy transgressions on the basis of American Jewish history and Reform Jewish tradition.

According to the article, “The original Trefa Banquet was an 1883 event at which leaders of the early American Reform movement made a bold, antagonistic statement by serving non-kosher dishes to commemorate the ordination of the first graduating class of Hebrew Union College in Cincinnati.”

Actually, the historical record tells a different story. The original Trefa Banquet, on July 11, 1883, in Cincinnati, capped ceremonies aimed, ironically, at unifying American Jews. Earlier in the day, 100 rabbinic and lay leaders, representing 76 congregations from across America, celebrated the 10th anniversary of the Union of American Hebrew Congregations (today known as the Union for Reform Judaism, but then a much broader union of congregations) as well as the ordination of Hebrew Union College’s initial class of four rabbis – the first such ordination ever held on American soil.

Unlike this month’s re-enactment, the infamous Cincinnati banquet prepared for the 100 Jewish leaders served no pork at all. Many Reform Jews of that time believed that abstaining from pork sufficiently distinguished them from their non-Jewish neighbors, especially in a pork-producing city like Cincinnati, popularly known as “porkopolis.” So Jews avoided pork products, even if they consumed seafood with impunity.

The many non-kosher foods that did appear on the menu of the lavish nine-course banquet — clams, crabs, shrimp, frogs’ legs and so forth — were not, like Trefa Banquet 2.0, the product of careful planning and prearranged advertising. They resulted instead from carelessness and lack of proper oversight. The well-known Jewish caterer who planned the dinner took no account of the fact that traditionalists had been invited to the celebration and created a banquet like so many other lavish Jewish banquets held in his club – akin to non-Jewish banquets, minus the pork.

One of those who attended the banquet, the eminent Reform Rabbi Kaufmann Kohler, later Wise’s successor as president of Hebrew Union College, admitted in a private letter that the banquet was a “big blunder.” It shows, he wrote, “how little judgement laymen have in religious matters.”

Rabbi Wise also knew the banquet was a blunder. After all, he himself kept a kosher home – his second wife, the daughter of an Orthodox rabbi, insisted upon it. But he was not the kind of leader who believed in making apologies. Instead he lashed out against his critics, insisting that the dietary laws had lost all validity, and ridiculed them for advocating “kitchen Judaism.”

The Trefa Banquet helped pave the way for the creation of a more traditional Jewish rabbinical seminary, New York’s Jewish Theological Seminary. Once Wise abandoned the goal of “union” and cast his lot with more radical Reform Jews who repudiated Jewish dietary laws, those favoring a conservative approach to Jewish life moved to establish a more religiously traditional seminary to compete with Hebrew Union College. The Reform movement’s Pittsburgh Platform of 1885, which among other things dismissed the Jewish dietary laws as “entirely foreign to our present mental and spiritual state,” strengthened conservative-minded Jews in their resolve, and the Jewish Theological Seminary opened on Jan. 2, 1887.

Why does any of this remain important today? Symbolically, the Trefa Banquet – “transgression as religion” in Wilensky’s terms — separated American Jews into two opposing camps that could no longer even break bread together. The incident anticipated and stimulated further divisions.

Let’s hope that Trefa Banquet 2.0 will not produce similar results.