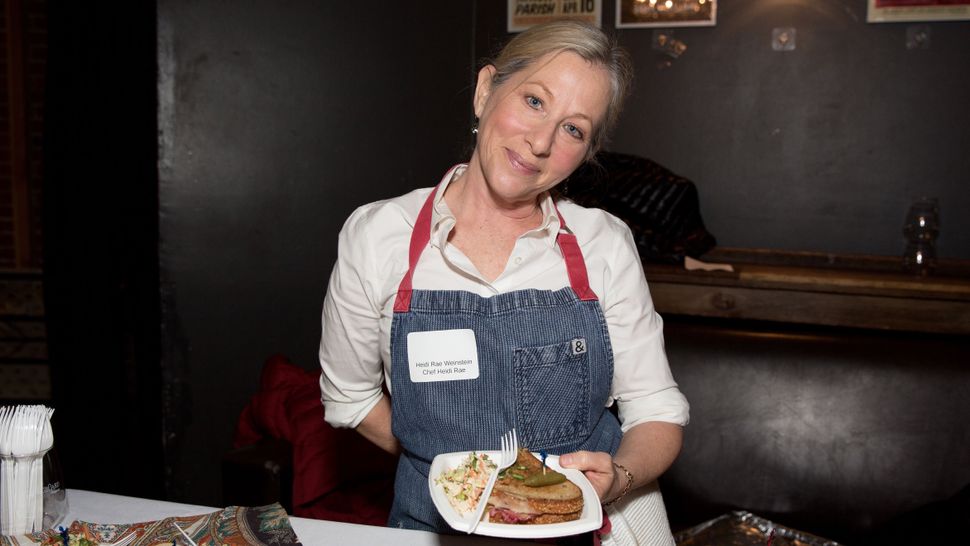 “Am I a bad Jew?” I ask myself, finishing off a third miniature bacon-peanut butter pie. I might, under other circumstances, be able to brush the feeling of guilt away. But the bacon pie is just one of many treyf (Yiddish for non-kosher) bites I have delighted in tonight. I have happily scarfed down pulled pork and potato kugel, a crab knish and a latke topped elegantly with a fried quail egg and –– of course –– bacon. After the bacon pie, I cleanse my palate with several shrimp toasts, a pork meatball and a chicken liver stuffed profiterole topped with…bacon jam.

This whole meal, loaded with bacon and other non-kosher delicacies, was blessed by a rabbi. It is, in fact, a Jewish event of sorts. 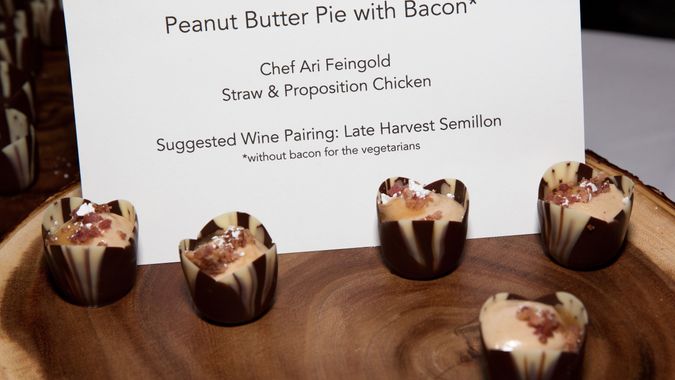 One of the decidedly unkosher offerings at Trefa Banquet 2.0. Image by Lydia Daniller

I am with a group of 80 or so other Jews gathered at Brick and Mortar, a large, dimly lit music venue in San Francisco. Some of my companions look apprehensive, but most, like me, are too busy eating to face any moral dilemmas. The crowd consists of two rabbis, two rabbit farmers, an Israeli winery owner and every other sort of Jewish food professional imaginable. We are gathered at Trefa Banquet 2.0., an event put on by food writer and personal chef Alix Wall, a Forward contributor who is working on a documentary, lonelychildmovie.com. Wall is the founder of the not-so-secret group for Bay Area Jewish food professionals, the Illuminoshi. This is the least conventional event the group has hosted. One took place at a chocolate factory, a winery, and a Jewish urban farm. But, until now, none have so directly explored the history of Jewish eating laws and customs.

Trefa Banquet 1.0 was quite a different scene. It took place on a muggy, sweltering night in 1883, in Cincinnati. The dinner’s intent was to celebrate the Hebrew Union College’s first class of ordained Reform rabbis. But, as dishes arrived from the kitchen, it appeared to some of the 200 guests that a horrible mistake had been made. First came Littleneck clams. Then there were crabs and frog legs. For dessert, an array of dairy-filled sweets covered the banquet table. This was not a kosher meal. Not even close. A handful of furious rabbis are said to have risen from their chairs, and stormed from the hall. For many years after, the event remained a symbol of the split between the American Conservative and Reform Jewish movements. Although the split did not happen as suddenly as tales might have you believe, and rabbis did not actually storm from the room, the event did represent an ideological divide between two major groups of American Jews. While American Reform Jews abstained from eating pork, they had been enjoying other non-kosher foods for years. The event was not intended to outrage — but outrage it did.

Here at trefa 2.0, however, none of us is expecting a kosher meal. We have come to eat all the pork and dairy we can hold, in the name of education. Eight Jewish chefs are at makeshift kitchen stations throughout the room. Each one has crafted a non-kosher bite of food for the guests to try. A few chefs are riffing on Jewish dishes (read pulled-pork kugel, latke with quail egg and bacon), while some have borrowed from other cuisines (Asian pork meatballs, for example). Also in the crowd are Mark and Myriam Pasternak. The Jewish owners of Devil’s Gulch Ranch have donated pork and rabbit for most of the dishes. The objective for the evening, as Wall puts it, is to “have an event where there is a learning component.” 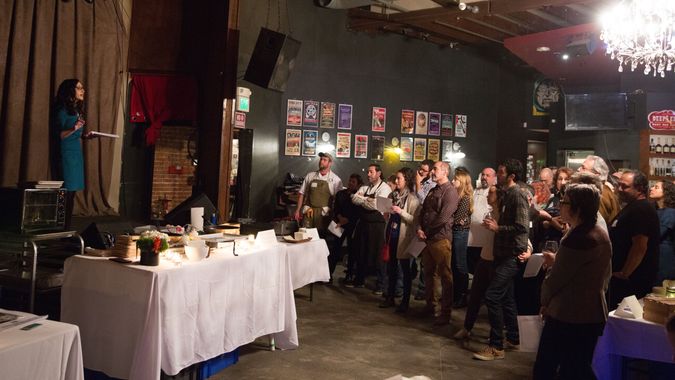 Rachel Gross, a professor of Jewish Studies at San Francisco State University, said the banquet was a good way to reflect on the way American Jews eat today. Image by Lydia Daniller

The learning component comes when Rachel Gross, a professor of Jewish Studies at San Francisco State University, takes the stage to speak. “The story of that night in Cincinnati,” Gross says, “tells us that debates about food practices have been central to the ways that American Jews think about themselves. This Trefa Banquet 2.0 is a wonderful moment to reflect on the ways that many American Jews eat and how American Jewish chefs cook.”

The story that Gross goes on to tell is one of endless debate surrounding the foods Jews should and should not eat. It is a debate that continues to roar on. Critics of Trefa Banquet 2.0 have already called it “disgusting” and “sad.” But for those in attendance, the event is a delicious opportunity to learn more about Jewish food history, while enjoying dishes made by talented Jewish chefs.

Before we dig in, Rabbi Sydney Mintz of Reform Congregation Emanu-El comes forward to bless our meal. There are few sights as strange as watching a room full of Jews say a Hebrew prayer over dishes full of shrimp, pork and dairy. Mintz’s rendition of the motzi blessing over bread has been adjusted, to now bless “everything.” 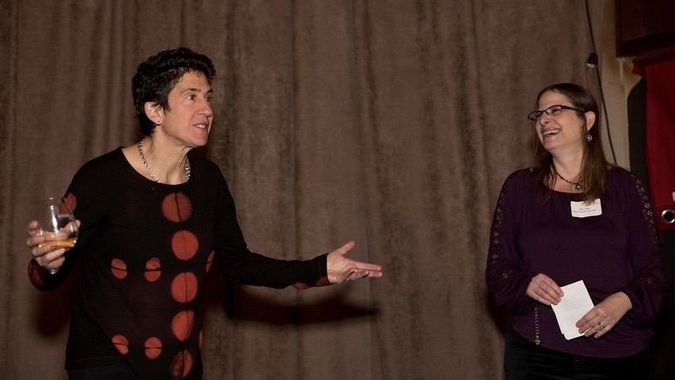 Then, the madness begins. Chefs fry quail eggs, chop bacon, build up heaping reuben sandwiches, and fry off mini shrimp toasts. Mingling with the rest of the crowd is another rabbi, Camille Angel. As we talk, she balances two shrimp toasts in one hand and a rabbit crepinette in the other. “I myself don’t keep kosher at home,” she tells me. “And, the opportunity to be a part of an educational, fun evening out with community is compelling.”

Trefa Banquet 2.0, does not end as dramatically as its namesake did. The food is exhausted, the wine is drained and the music shuts off. The Jews reentering the brisk San Francisco night wish each other good health, then hug and part ways. Tonight, my stomach full of bacon, rabbit and crab, I have received quite an unusual education in Jewish eating practices. With more than a little bit of bacon on the side.

Elazar Sontag is the author of “Flavors of Oakland,” a cookbook about home cooks and their cultures. His writing has been featured in Vice, Serious Eats and Edible Magazine. Follow him on Instagram @e_zar