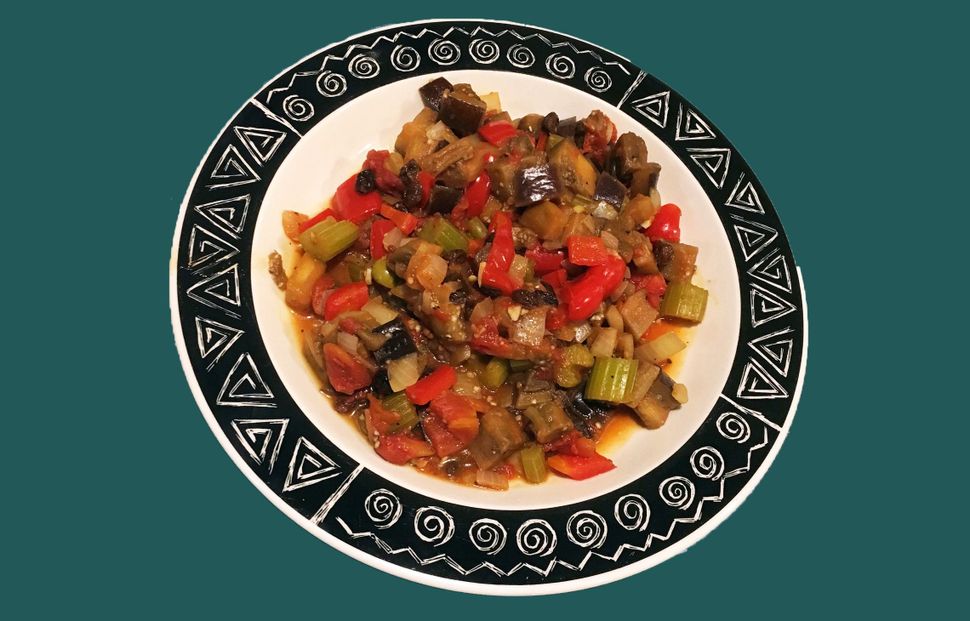 Italian cooking, like most regional cuisine, varies widely depending on the physical and landscape. Those closer to the water, for example, feature more fish and seafood in their cooking. Italian Jews entered the country through Southern Italy, and as such, our cuisine is predominantly influenced by the Spanish (Sephardic) and Arabic traditions and ingredients.

Eggplant, imported from China and India and introduced to the Mediterranean by the Arabs in the Middle Ages, is a common guest in Sicilian cuisine. Orthodox Italian Jews often serve Caponata as a cold dish at Sabbath lunch, Chef Irene Yager of Manhattan JCC recently told me.

Yager stresses that “recipes are just a guideline,” and the recipe below is particularly ripe for experimentation — though even avowed raisin-haters like myself might be pleasantly surprised by the way the dried fruit is transformed through this cooking process from an unwelcome rubbery morsel into a bright pop of fruity, acidic flavor.

3) Add the red pepper and cook until crisp-tender, about 5 minutes. Add the onion and sauté until translucent, about 3 minutes.

4) Add the diced tomatoes with their juices, raisins, and oregano.

5) Season with salt and pepper to taste.

6) Simmer over medium-low heat until the flavors blend and the mixture thickens, stirring often, about 20 minutes.

7) Add the vinegar, sugar, and olives.

8) Season with salt and pepper, to taste.