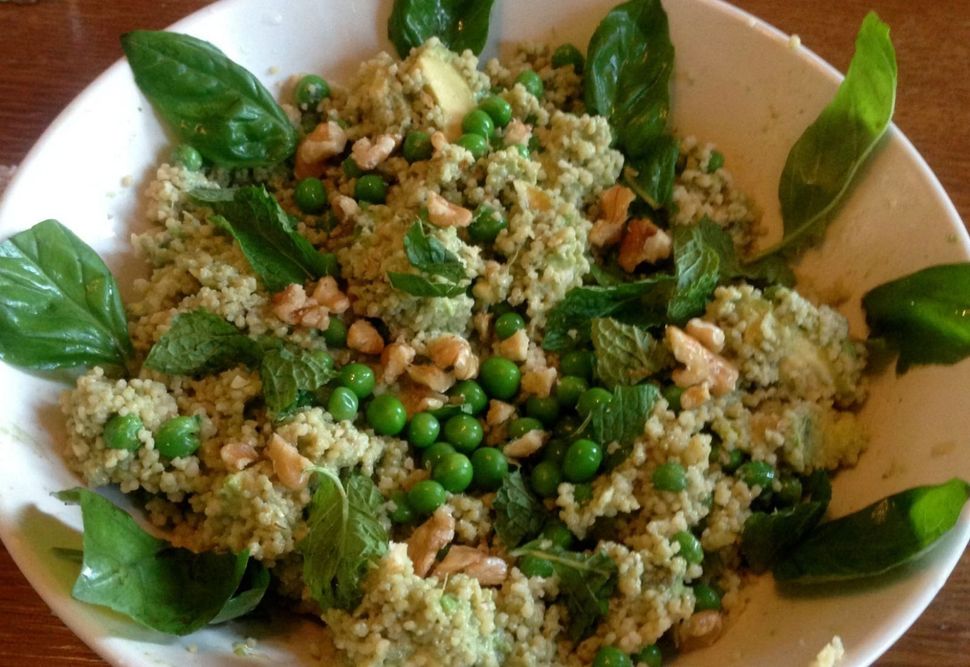 (JTA) — Not even couscous is safe from the Israeli-Palestinian conflict.

Full disclosure: When I report on Israelis and Palestinians, I do my best to stay objective. But in this particular story, my sympathies are with the couscous.

Virgin Atlantic, the international airline, made the fateful mistake of putting Palestinian-style couscous salad on their in-flight menu and calling it… “Palestinian couscous salad.”

Virgin Atlantic has not learned the cardinal rule of calling food “Israeli” or “Palestinian,” which is never to do either of those things. Because if you do, people will come after you on Twitter and invoke millennia of history and use words like “terrorism” and “occupation” and “boycott.”

In this case, a guy with — I kid you not — two Twitter followers threatened to boycott Virgin and called them #TerroristSympathizers for calling the dish Palestinian. A few other people also tweeted about it. Another guy posted a comment about it in a private Facebook group.

And so, an international crisis was born. Virgin put out a statement that is absurd in its sincerity about a ridiculous controversy. Here it is, in full:

We’d like to reassure all customers that our sole intention was to bring new flavours on board, and never to cause offense through the naming or renaming of the dish.”

This isn’t the first time a social media feud has erupted about Israeli and Palestinian food. It won’t be the last. But, in the spirit of peace on earth and goodwill toward people, please read this closely:

In fact, I’m going to go out on a limb and say this was never really about the couscous. Palestinians fear cultural erasure. Israelis fear delegitimization of their national identity. So they take those very real concerns and project them onto airline food. Or a Rachael Ray cooking show. Or an independent bookstore on the Upper West Side.

In the usual version of this story, pro-Palestinian activists accuse Israel of “co-opting” and “appropriating” indigenous Palestinian food. In this case, it was presumed Zionists accusing Virgin Atlantic of — what? Acknowledging that there is such a thing as a Palestinian? As a pro-Palestinian web site noted in its report on the controversy, “The company’s spokesperson was not able to explain why it was offensive to describe as Palestinian a dish that it had itself explicitly affirmed was Palestinian cuisine.”

Virgin Atlantic seemed to learn that when it comes to the Middle East, it’s better to say nothing at all than to seem to be picking sides — or side dishes. As the Arab Israeli chef Nof Atamna-Ismaeel, a winner of the Israeli cooking show “MasterChef,” told an interviewer in 2016, “You can’t escape politics when talking about Arabic food. If you say ‘Israel’ or ‘Palestine,’ it’s immediately political. We’re not Switzerland.”