Should You Give Tubi 60 A Shot This Purim? 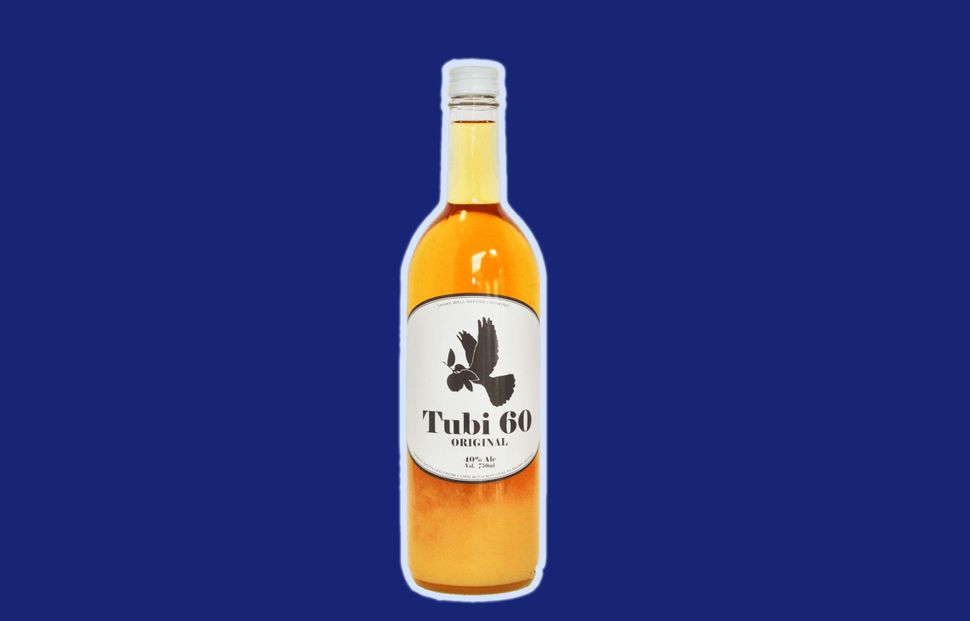 When I opened the carefully packaged bottle of Tubi 60 with my colleagues, we were all a bit skeptical, to say the least.

It was cloudy, yellow — and it smelled like trees.

Upon first sip, an (of-age) intern compared the taste to “being dragged through a wind turbine…in a good way.”

“It’s a powerful drink,” she added, three shots later. “Reminds me of college.”

Despite our initial reservations, we all finished our first tastes — and several of us went back for seconds.

Tubi 60 was developed by two brothers, Hilal and Yanai Tubi, in their Haifa apartment in 2012. In the six years since its genesis, the heady brew made from lemon, herbs and a smattering of “secret” spices has become a divisive and mythical figure in the Israeli party scene.

“You either hate it or you love it,” one Tel Aviv University student told me via the Facebook group Secret Tel Aviv. “I don’t know anyone who has mild feelings about it.”

Some fans say the proper way to drink it is to mix it into a barad, the Hebrew word for a slushie (and for the ten plagues), or to mix it into tonic water, while some daring souls like to throw their Tubi 60 back shot by shot.

“I sometimes drink dish soap, so I am familiar with the taste,” another Israeli wrote in Secret Tel Aviv. Several others compared the taste to Windex or Pledge.

There is a rumor that Tubi 60 doesn’t give you a hangover. Perhaps that’s because no one actually drinks enough of it to get a hangover? Rest assured: With a 40 percent alcohol content, this spirit packs the same amount of punch as straight vodka, rum and other distilled spirits — so proceed with caution.

When I lived in Tel Aviv in 2014, watered down 5 shekel shots from the discount chain Cofix, sugary glasses of Absinthe and delicious Israeli wines kept my friends and I socially lubricated — and Tubi 60 was nowhere in sight. When I tasted it for the first time in New York in the dead of winter, I wasn’t repulsed, but I wasn’t totally charmed, either. Perhaps its heavy citrusy soul, as pungent as a preserved lemon and as herby as a medicine man’s secret lair, is best suited to sunnier climates where it can breathe in the open. The bottle also quickly separates if you leave it open for more than a day or so, though a quick shake can solve that problem in a pinch.

I can’t say Tubi is a bottle I’d pick up off the shelf for myself. And yet Tubi 60 reminds me why I love Israel — our hopelessly entrepreneurial Jewish homeland where two twenty-somethings can turn their flat into a lab and become the latest hit sensation in the quirky city where just 4 years ago we turned a song about blowing us into the sea into the anthem of the summer.

“Honestly, Tubi has such a special place in my heart because it represents an incredible time in my life with amazing people, and an amazing culture,” one Birthright alum told me.

In a world where people spend hard earned money on kombucha, which is basically just sugary slime, why can’t there be a place in the Jewish heart for Tubi 60, too?

You might not have the time or money to hop on a flight to Israel. But I bet you have $35 for a bottle of this weird Israeli brew, now widely available in the United States. So raise a glass to Jewish weirdness. I might even raise a chaser of Tubi with you — if you’re buying.

Should You Give Tubi 60 A Shot This Purim?