Orthodox Women May Be Kashruth Experts At Home, But Are Rarely Accepted As Professional Kosher Inspectors 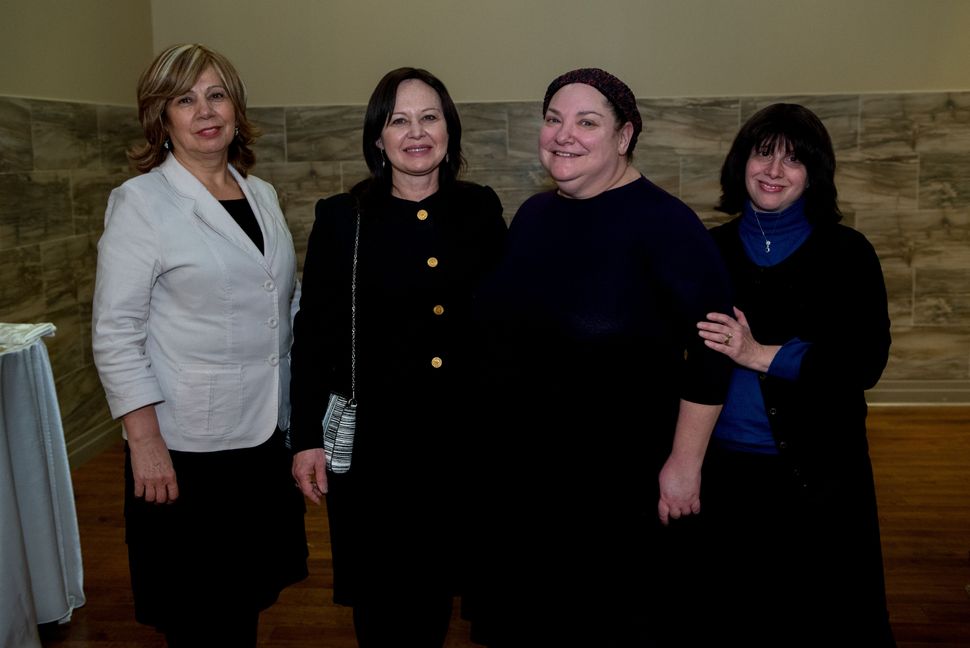 Graduates of the COR-Kashruth Council of Canada Mashgiach Training Program. Image by Courtesy of COR

When Tamar Schulman enters a kitchen as a mashgicha (kosher on-site inspector), she often receives looks of surprise. The kitchen workers were expecting a man.

Enter most kosher homes, and you’ll find a female mashgiach bustling about the kitchen — it is often women, after all, who are tasked with the job of maintaining a kosher kitchen.

Yet this role rarely translates into the professional food industry.

While there aren’t a lot of statistics to go on when infiltrating the world of mashgiach_s, it’s clear that female _mashgiachs are a minority in the kosher industry.

A mashgiach, or mashgicha (Hebrew for a female mashgiach) is an on-site inspector who ensures that all food in a restaurant or event is strictly kosher according to the standards of the certifying organization. All kosher establishments are required to have a mashgiach, from upscale restaurants and hotels to slaughterhouses, caterers and nursing homes. The mashgiach usually represents a kosher certification agency like the OU or Star-K, and on some rare occasions is a rabbi who represents his own private certification.

The job often involves checking and verifying food shipments, overseeing kitchen staff, and checking eggs for blood spots and vegetables for forbidden insects. It isn’t a high paying job, and depending on their work locations, mashgiach_s must be familiar with the Judaic laws, or _halakhot, of slaughtering meat, cooking meat and fish and separating meat and dairy.

In addition to knowing the laws of kashrut inside and out, the mashgiach should be informed about “engineering, entomology, metallurgy, boiler treatment, food chemistry and world market trends,” according to Reb Sholom Fishbane. According to the Talmud, the requirements for being a mashgiach are being Jewish, Shabbat-observant, and observing the laws of kosher. There’s nothing in the text restricting the role to gender — so why are there so few female mashgiachs in the field?

Being a mashgiach is all about trust, as a community must trust that the mashgiach will make sure the food is up to their standards of kashruth.

So why does the majority of the Orthodox Jewish community not think that Jewish women, who for centuries were saddled with cleaning and cooking and keeping a kosher kitchen, are up to the job? Even after all this time, do we still not trust women?

Rabbi Bentzion Walton, Director of the Va’ad of Northern California, counts out loud over the phone for me. “We have one, two, three…Right now we have three,” he tells me. “We hire them like we hire anyone else.”

“We employ a number of mashgichot and they are all excellent,” said Richard Rabkin, managing director of Kashrut Council of Canada. “In fact we have a college accredited mashgiach training program and attached is a picture of our recent graduating mashgichot.”

“I can name at least four or five other female mashgiachs,” says Tova Schulman, a kashruth inspector who works for Star-K, a kosher certification company which is one of the few that is willing to employ female mashgiachs. “There are by far more men than women at training sessions, not even a question.”

Talia Weisberg served as a mashgiach for three years at the Harvard Hillel kosher dining hall, which is overseen by KVH, Boston’s local hashgacha. Her job involved turning on stovetops and ovens, washing vegetables bugs, checking deliveries, and sealing and unsealing the kitchen.

“I’ve never noticed a female mashgiach at any kosher establishment I’ve frequented,” Weisberg says. “It’s fairly male-dominated. Women are generally compelled to be the primary caregivers for their children, and the long hours that most mashgiach jobs require are generally not conducive for mothers.”

“It’s definitely unfair when women are overlooked for professional positions when they have all of the qualifications,” she says. “Do [the] rabbis not understand that their wives are the mashgichim of their kitchens?”

Andrea Levy, a business owner and a mashgiach for her own business, Niagara Falls Catering, serves as a volunteer mashgiach for other caterers and the kashruth council in Toronto. She was trained by the COR, the kashrut council of Toronto, through an intensive forty-hour course in the laws of kashruth.

“I’ve never been in any way disrespected or demeaned in this business because of my gender,” she says. “My experience is most of the people interested in kashrut are men. Most guys specialize in kashrut for their rabbinic ordination, and they can then use that for job options. Women don’t have that background. What you have to understand is that it is a demanding, physical job, standing in kitchens all day. Work as a mashgiach can be fifteen hours a day. In a meat restaurant, even more than a dairy one, you have to be there all the time. It’s not practical for a woman with kids. It’s got a lot to do with women not wanting to work in the food business. The kitchen is a brutal job…The kitchen staff expects to see a man. It’s the same as any job you get untraditionally; you have to counter people’s expectations. It isn’t necessarily misogyny.”

But not all female mashigachs would agree with her.

Jackie Baratt has spent ten years working as a mashgiach, handling events like bar or bat mitzvahs, weddings, and synagogue kiddushes for the Va’ad of Washington DC, under the auspices of Capitol K. “Men get jobs first,” Baratt tells me. “And they are paid more. The usual reason given is because they have families to support. And females will be let go if there’s a male in need of a job. I was paid less than the men, so caterers liked that. I definitely found that caterers/restaurants felt that they could try to bully me or get one over on me because I wasn’t a man. There were occasions where guests at events were shocked and refused to eat because it was a female mashgiach.”

Kashrut is “definitely” a male dominated industry, Baratt tells me. The ratio of male to female mashgiachs is “something like 100:1”, in her estimate.

She’s not far off.

“We have a handful,” says Rabbi Dov Schreier, Rabbinic Coordinator at the Orthodox Union, the largest kosher certification agency in the world. “My guess is because we probably have 100:1 applications from men to women.”

Baratt says that in her experience, females had to go through an 18-month training program, while male mashgichim were exempt. “It was assumed the men would know all of it because they learn Torah,” she says. This imposter syndrome, this feeling that women’s work isn’t legitimate unless a man is doing it, is pervasive in many of the mashgichim I speak to.

Chevi Friedman has worked in kosher restaurants throughout Brooklyn, although not in an official mashgiach capacity. She was certified to turn on the flames in the restaurant to avoid bishul akum, cooking by a Gentile, one of the Jewish dictums created to limit socialization between gentiles and Jews.

“Being a mashgiach is thought to be a rabbi’s job,” she added. “So women don’t consider it.”

It is as if the kitchen is the women’s realm — up until there is money exchanging hands. In the male-dominated industry of kashrut, it’s a man’s world.

Chaya (name changed to protect identity) comes from a family of _mashgiach_s. She and her siblings are all in the business, and a good 40% of the trainees she studied with were women.

“The hashgacha here actually prefers women because they have more attention to detail in the kitchen,” she says. “But if you have an opportunity to do something that you don’t come home smelling like a kitchen and feeling like garbage, you do it.”

Despite the low wages and long hours, _mashgiach_s are almost uniformly treated as voices of authority in their positions; with one word, a mashgiach can shut a restaurant down for the day and cost the owners thousands of dollars in lost business. For Orthodox women, who face limited religious career opportunities, having that religious authority is exciting.

“My sister is super rough on the head of the certification organization,” Chaya says. “She even yelled at the head of the Va’ad [kashruth council] once, and they still give her preferential treatment as one of their best mashgichim.”

“We really do learn more being home and cooking with our mothers,” she adds. “It’s nice to know that something that gets treated like ‘women’s work’ is ‘real work’, too.”

Orthodox Women May Be Kashruth Experts At Home, But Are Rarely Accepted As Professional Kosher Inspectors